The name ‘Turki Lala’ wasn’t a familiar one until a few weeks ago. It was only when actors Humayun Saeed and Adnan Siddiqui announced being part of a prestigious Pak-Turk collaboration centered around the story of this heroic figure from Islamic history that we became aware of him. This is indicative of how little many of us know about the rise and fall of the Islamic empire, the Khilafat movement and even the many phases that the Muslims of India suffered through before Pakistan came into existence.

One of the reasons why ‘Turki Lala’ is being created is, in fact, in order to make the world more aware of the many heroes that dedicated their lives to strengthening the power of the Islamic empire.

Turki Lala migrated from Pakistan to the Ottoman Empire and is remembered as one of the most glorious heroes to have assisted Turkey during the Balkan War and World War 1. According to plan, his story will be narrated through a three season long series and it is to why a Pakistani contingent is currently having meetings in Turkey. Dr Kashif Ansari, Dr Junaid Ali Shah as well as Adnan Siddiqui and Humayun Saeed will be helming the Pakistani part of the collaboration. Handling the Turkish end will be Tekdin Films, one of the producers of the massively popular series Dirilis: Ertugrul.

According to a press release issued by the team: ‘Countering the narrative of Islamophobia and highlighting the teachings of Islam and the goodness the religion propagates will be a key focus of the new alliance between Pakistan-based Ansari Films and Turkish production house Tekdin Films.’ Adnan Siddiqui elaborated, “Plans are afoot to create content that breaks the myth surrounding Muslims which, unfortunately, had led to unnecessary hatred towards the community. We want people to know that Islam is all about purity of thought and deeds through our future productions. We had a detailed dialogue on the same with the communication director of the Turkish Presidency, Fahrettin Altun.

Humayun Saeed adds, “Turkey has very graciously extended its cooperation to us when we start shooting the series. Turki Lala is a formidable figure in Pak-Turkey relations which go back centuries. The programme will be a tribute to his heroics as well as the great friendship between the two nations.” 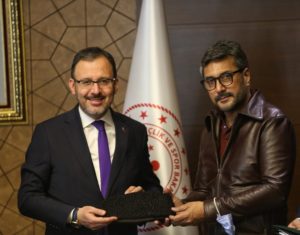 With Turkish Minister for Youth and Sports, Mehmet Kasapoglu

Accompanying the Pakistani contingent was actress Reema Khan who posted videos and images from her trip frequently on Instagram. She and the rest of the Pakistani team were seen visiting the grave of Turki Lala in Istanbul. Ertugrul actor Celal All was also seen frequently with the team. The Pak-Turk cordiality, it appears, is at a high!

Even in the case of Dirilis: Ertugrul, which became a sensational hit after it was dubbed in Urdu and aired on PTV last year, it was well-acknowledged that the series inspired religious fervor within its audience. Turki Lala is yet another story with its roots in Islamic history and which will be traversing pre-partition India as well as Turkey. It may, as the Tekdin-Ansari team hopes, be able to bring the Islamic world together in the forefront.

It will also strengthen Pak-Turk ties, as pointed out by Dr Junaid Ali Shah. Of course, a Pak-Turk series of this magnitude may also open new doors for both countries’ entertainment industries. The press release states: “According to the Ansari-Tekdin team, this will start a new chapter in cross-border talent exchange including actors and writers and more programmes on popular names in history.”

International collaborations have been announced many times before in Pakistan but they have unfortunately usually faded away, diminished to half-baked projects that never managed to see the light of the day. The Ansari-Tekdin collaboration, however, has been developing at a rapid pace, from the signing of a Memorandum of Understanding (MoU) last year to subsequent visits to Pakistan and Turkey by delegations from both countries. Turki Lala may just truly – hopefully – storm on to our TV screens come 2023, the year scheduled for the release of series’ first season.

But who will play Turkey Lala? Probably a Pakistani actor, considering that the historic hero was from our region. Will it be Humayun Saeed? Adnan Siddiqui? Will an all-new hero emerge into the battlefield? This we will only know as the story progresses further.