TV talk shows can sometimes make you feel like you’re back in school; one person stabbing the other in the back, malicious jokes getting cracked and salacious gossip getting laid out in the open. In school, the issue was pinned down to immaturity but when grown men and women indulge in such cruelty and it all gets aired out on a major channel, the issue becomes much more hurtful.

In his newly launched talked show, ‘Ghabrana Mana Hai’, host Vasay Chaudhry asked his guest Yasir Hussain if anyone from the entertainment industry had turned up at his wedding uninvited and Yasir went on to name actress Nausheen Shah. A series of wisecracks followed after which Yasir tried to gloss over the matter by saying that he admired Nausheen’s sense of style. The damage, by then, was done.

The clip from the video promptly went viral. Yasir, of course, is well-known for his forthright wry sense of humor and some may have thought that he was joking. On watching the overall talk show, however, it became clear that this was no joke. It was saddening. This wasn’t mere gossip. This was one actor getting ridiculed in a cruel way by two others. It wasn’t even being done on social media’s relatively less formalized platform where random Insta-discussions sometimes lead to controversy. It was all taking place in a proper TV show, where edits and cuts are entirely possible. An experienced host and an industry veteran was asking the questions. Why didn’t Vasay Chaudhry know where to draw the line? Would the industry now be humiliating each other just for the sake of ratings or trending on Instagram?

Actress Nausheen Shah was initially quiet on the matter and opted instead to post two quotes on her Insta-story. “Weak people revenge. Strong people forget. Intelligent people ignore,” said one. The other quote read out, “When you are building an empire you don’t pay attention to nonsense. I am too busy to get distracted.”

On being contacted, she commented, “I am just shocked. I am following a different path than this and I really don’t want to get involved in this sort of controversy. Yasir Hussain and the host chose to discuss all this and they can keep discussing it if they like. I was ignoring the whole matter but I am thankful for all the support that I have gotten from the media and from my fans commenting on social media.”

“If I had known that going to Yasir and Iqra’s wedding was such a big problem, I wouldn’t have come. I don’t really want to get involved in this,” she repeated. “The only reason why I am saying all this is that you reached out to me.”

Yasir Hussain, on the other hand, feels that social media needs to get over the whole issue. In a series of Insta-stories, he declared that he was telling the truth and if that made him wrong, then the TV channel airing the show was also wrong and the bloggers and Instagram pages pumping up the issue were also at fault. “… poora system ghalat hai mai akela nahi… (the whole system is wrong and not just me alone).” He addressed the masses and told them that if they wanted to watch shows following the ‘Koffee with Karan’ format, then they needed to be able to bear with the answers as well. “… Enjoy the show and move on …” 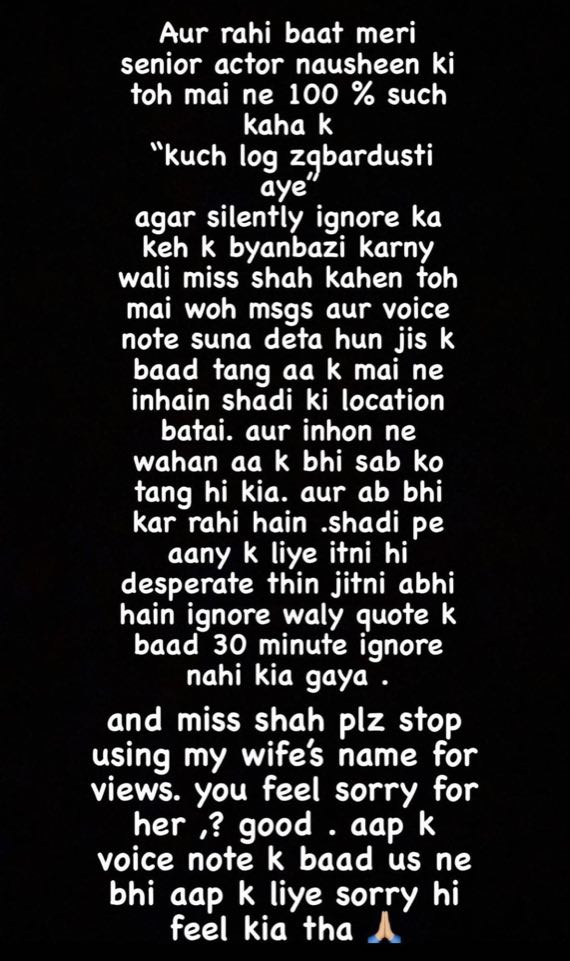 He also stated that he had voice notes where Nausheen was asking him about the wedding after which, irritated, he had given her the location. It is hoped that these voice notes don’t get released. The matter has gone on for long enough. It is hurtful and lays bare the many cracks that run through the Pakistani entertainment industry. The fraternity is already rife with egos, camps and favoritism and the last thing it needs is celebrities attacking each other.

In his Insta-story, Yasir states that bloggers need to stop gossip-mongering and also highlight the good that he does. Of course, one would love to cheer for the good that he does. He and Iqra Aziz continue to be one of entertainment’s most followed celebrity couples. He has a brutally honest sense of humor that wins rave reviews at awards shows.

But when a video like this goes viral, it’s bound to give way to gossip and ridicule. It isn’t school after all. It’s an adult world, a public platform where real emotions can get hurt, a real industry all working close together. Care needs to be taken.