Desi bahus everywhere nodded their heads in sympathy when Meghan Markle told Oprah that the British crown had been worried about her yet-to-be-born baby’s skin color. Been there, done that, girlrriend, they told her.

There was so much more (royal) dirty linen that got dragged out in public when Meghan Markle and Prince Harry decided to sit down with Oprah and reveal all. It hadn’t been a secret that the young couple had had their issues with the royal family. There had been plenty of talk when they had opted to move out of the UK last year and settle into the USA. But one had assumed that perhaps things were better now, considering that Harry and Meghan were expecting another baby, had landed deals with Netflix and Spotify and looked happy enough in the pictures that the tabloids kept putting up.

But the cracks run very, very deep it seems. You may be Team Meghan or Team Palace but a closer look at the facts does indicate that there has been a definite bias working against the young couple.

Lo and behold, it turned out that the British royal family, with their palaces, parties and polo grounds, were just good ol’ fashioned desis at heart. From saas-bahu spats, to sister-in-law issues, to racist concerns regarding skin color to ignoring mental health and then, inevitably cutting off the errant son from the family wealth, the stories all came out, much to the joy of tabloids all over the world and of course, Oprah Winfrey, who leaned forward, frowned and – in a very Nida Yasir way – commiserated with a ‘What?’ ‘What?’  The Oprah way, the Nida Yasir way

It was a sad interview but at least Oprah was conducing it. Should the interview have had been on a Pakistani morning show, everybody would have cried a bit more. A spiritual baba jee could have been called in to pray for the fortunes of Meghan and Harry. Somebody from the audience could have suggested that black magic was at play. But this wasn’t ‘Good Morning Pakistan’. This was Oprah Winfrey with the Duke and Duchess of Sussex so things didn’t downslide towards the utterly tacky.

The content getting aired, though, was uncannily similar and we were reminded of countless desi movies, dramas and society, generally. Here are some of them…

When Prince Harry and Meghan Markle had announced moving to the U.S.A. last year, a meme had gone viral on Twitter, replacing the faces of the royal family on the poster of the Bollywood hit, ‘Kabhi Khushi Kabhie Gham’. Following the Oprah interview, the poster began to make the rounds again. You have to admit, the House of Windsor is not very unlike Karan Johar’s Raichand family, with their ego plays and class prejudices. Harry and Meghan have even left the family wealth, a la Shahrukh and Kajol!

And every time Meghan complained, she was delivered a ‘Keh diya na? Buss keh diya!’ Mahira Khan’s Khirad in Humsafar endured grueling torture at the hands of her evil mother-in-law because she was not from a suitable background. Apparently, so has Meghan. The ‘Mummy yeh aap kya keh rahi hain?’ line (translated in English) fits right into Meghan’s narrative. 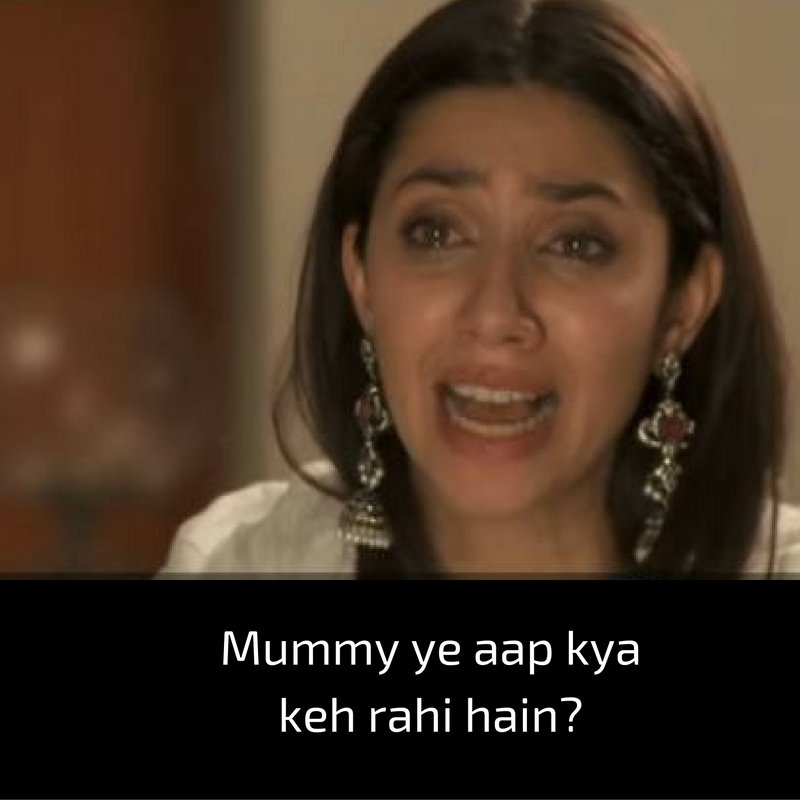 The ghar ki bahus are fighting it out

Because every Pakistani drama – and Bollywood – buff will tell you that the ghar ki bahus like to fight it out. They don’t get along. Kate made Meghan cry, according to the Oprah interview. Sometime ago, Kate had revealed that Meghan made her cry. Quite like some of the saddest bits in a desi drama. Lots of crying, a bit of slapping around and evil in-laws glaring it out.

The royal family was evidently concerned during Meghan’s first pregnancy about the color of her baby’s skin. Would Archie be fair or take after his maternal side and be a few shades darker? It’s a shocking notion – but for us, maybe not so much.

Colorism has always run rampant in desi households and the huge sales of fairness creams – do we call them ‘glow’ creams now? – is testament to this! So are all the many, many songs and storylines that we’ve seen all our lives, often not realizing how blatantly racist they are.

Mental health is a no-no

Meghan revealed that the palace chose to ignore her mental health issues. She admitted to have suffered through a period where she felt suicidal. But she wasn’t allowed to seek help for her mental health.

“I was told that I couldn’t [get help], that it wouldn’t be good for the institution,” said Meghan. “I went to one of the most senior people to get help. And I share this because, there are so many people who are afraid to voice that they need help, and I know how hard it is to not just voice it but to be told no.” Following the interview, Meghan’s evil in-laws have responded with an official statement declaring that matters will be resolved privately. The official ‘Royal Communications’ which went viral as soon as it was released by Buckingham Palace!

That sounds ominous. If it was a desi household – particularly in a drama extending to a whopping 40 episodes – this would mean plenty of mental and physical torture, acid burns and maybe kala jadu added in for effect, all within the privacy of the home.

But this is the royal family. Perhaps they’ll know better.