Neeli Zinda Hai, which has just started airing on ARY Digital,  is the Pakistani drama industry’s latest attempt at the horror genre. Being a horror buff who doesn’t scare easily, I jumped at the chance to give this drama serial a go. Hoping to watch a Pakistani drama reminiscent of the iconic ‘Haqeeqat’, I was truly intrigued by the premise of the show.

Fair warning; there are spoilers ahead.

Written by Adeel Razzaq, the show introduces all the key characters in the first episode; attempting to lay the groundwork for the rest of the season. The story revolves around Sumbul and her estranged husband Aman, who returns from a long stint in Australia after Sumbul goes through a stillbirth, which leaves her massively traumatized.

Sumbul is understandably resentful of her elusive husband who has been away for the past 6 years, leaving her in a toxic household, under the mercy of a petty and problematic mother-in-law, Meherbano and a deaf daughter who has no relationship with her absent father at all. Aman notices his mother’s disdain for Sumbul and in an attempt to smoothen things over with his wife and build a relationship with his daughter, decides to move out of his parents’ house with his family.

This is how and where presumably the problems will begin for the already shaky couple in the future episodes.

Where I was hoping for legitimate scares and atmospheric horror, I was left scratching my head at the many familiar and quite frankly dated tropes that make for a show that is being made for those who revel in the chaotic scheming and incessant fights between members of a family for no reason. From the moment the opening credits started rolling, which incidentally were almost identical to those of the popular Netflix show, The Haunting of Bly Manor, I knew the show was going to be shoddy.

Mild plagiarism aside, the characterization of the players in the show leaves much to be desired; Sumbul is a Mary Sue like character who takes her mother in law’s vitriol quietly and obediently. In turn, Meherbano brings nothing new to the evil mother-in-law cliché, being mean for no reason at all and lying blatantly to make everyone but her, look bad. Moreover, the amount of emotional blackmailing and gaslighting both Meherbano and Aman resort to in just one episode is laughable. It takes both of them a second to turn on the waterworks when trying to make a point and I for one was truly not there for the psychological warfare Sumbul has to go through in a single episode. 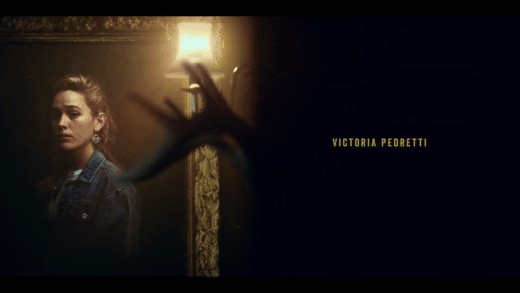 Some major similarities right there, from ‘The Haunting of Bly Manor’ on Netflix

I don’t know if it’s just what I expect from my TV viewings nowadays but this narrative of the evil mother-in-law and the downtrodden daughter-in-law is extremely regressive and pointless. Why are we still watching stories where characters who depict such problematic tendencies as Meherbano are given such pivotal roles on a mainstream TV show? While I appreciate Aman calling out his mother’s nasty behavior in the first episode, establishing her as one of the major villains on the show, we certainly need to stop making content that glamorizes characters like this, for the sake of bettering our society

Now come the plot holes in the first episode. Firstly, Meherbano’s reaction at the news that her son will be moving out of their house was grossly exaggerated for someone who has seen her son like once a year for a week in the past 6 years. She goes ballistic on poor Sumbul, who just gapes at her like a deer caught in the headlights. Meherbano all but snatches the wig off of Sumbul’s head (not for lack of trying though) and it was kind of cringey to watch. This reaction left me wondering if she was upset at her already absent son leaving the house he hasn’t lived in for so long or was she upset at the loss of her tongue’s favorite punching bag.

Secondly, apart from minor snide comments here and there by Aman’s father and sister did no one else think to stop Meherbano from being so cruel to her daughter in law? The moral compass of the entire household is massively skewed.

Another gripe is how the introduction of their new house was made, which is evidently the house where the titular Neeli will haunt this family. It is being made to seem scarier than it needs to be and to me, that’s just lazy writing. I’m sorry, Pakistan is a warmer country, so in no shape or form can anyone convince me that installation of electricity for the sake of cooling or heating up a house is not someone’s top priority when getting a new house. And yet when the family arrives there, Aman is left flicking the main switch of the house uselessly while standing in the dark, shouting at his wife to check if the light was on. Lastly, the trajectory of the show is extremely predictable. The involvement of black magic is a go to for a lot of shows on Pakistani networks, however unlike some depictions of black magic in Turkish movies like Dabbe (the third part is truly bone-chilling), Pakistani daytime drama’s depiction of it seems extremely tame. The motivation behind resorting to this kind of abhorrent practice in this show is not strong enough and is being used as a plot device which cheapens the gravity of this depraved act in the first place.

Its many problems aside, I believe in second chances. So I’ll probably give the second episode a shot in the hopes that once Neeli arrives the show will acquire the scare element that was all but absent from this episode.

However, so far I don’t know who the audience of this show is because any horror genre lover won’t be impressed by a blue eyed ghost, falling glasses and shaking picture frames. I do hope that the show has more to offer than making this family bear the repercussions of triggering the wrath of a scorned mother in law.