“To be or not to be,” murmured the incensed man, pacing in his room. The veins in actor Gohar Rasheed’s neck were pumped up, his eyes wild. He sat down at a desk and began conversing with himself, splitting into two different personas: one was timid, scared, the other was aggressive and assured, ready to take on his enemies. The man, Daniyal in the drama ‘Laapata’ currently airing on the HUM TV Network, was thirsty for revenge, mad, his face sifting within seconds from mortification to the calculated confidence of a murderer.

Only Gohar Rasheed could have played Daniyal just so. 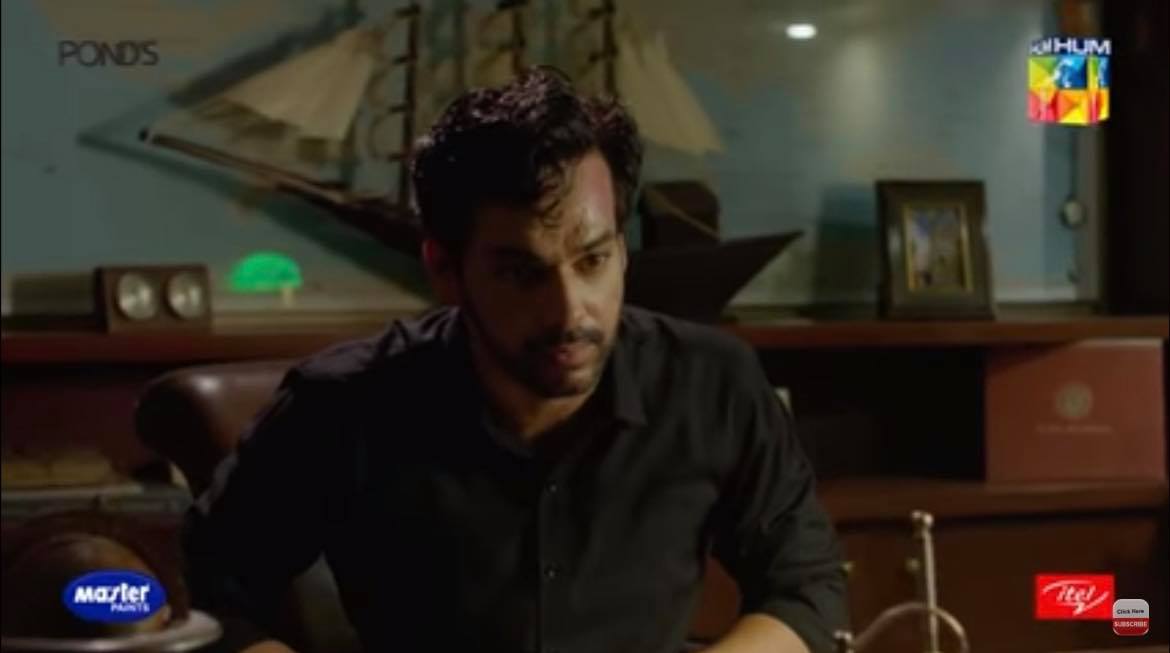 Image via the HUM TV Network

In an earlier scene, Daniyal stepped menacingly towards his wife, enraged. His body was taut, his face contracted, murderously angry and at the precipice of losing his control.

Again, Gohar Rasheed in his element. The actor needs to take a bow.

Interestingly, when I talk to Gohar, he tells me that he was initially not signing on to the role of Daniyal simply because he wanted to take a break from acting. The drama’s director Khizer Idrees, however, insisted. Watching the drama now, I can understand the director’s perspective. Daniyal, despite having a very interesting character arc, could have dwindled out into a generic villain had he not been transformed into a bipolar, dangerous villain by Gohar. He could have been forgettable, overshadowed by the romance in the storyline – instead, one wants to keep seeing Daniyal.

“The scene where Daniyal reveals his split personality and murmurs ‘To be or not to be’ was completely improvised. It turned out to be this golden moment.”

“I signed on to Laapata without reading the script, only knowing the storyline,” reveals Gohar. “It was only when I came on set that I appreciated Khizer’s direction, vision and the wide margin that he’s given me to perform. I was in an actor’s playing field and all credit goes to my director.”

“The scene where Daniyal reveals his split personality and murmurs ‘To be or not to be’ was completely improvised. It wasn’t part of the original script,” he continues. “It was just a quote that I started murmuring while performing the scenes and Khizer felt that it should be added in. It turned out to be this golden moment.”

The episode overall, which shows Gohar’s character killing his first wife, threatening his second one and then adding shock value in an insane dual personality scene, has been a ‘golden’ one for Daniyal. “I told Khizer that if I had to perform out these scenes, then I would have to lose myself in them,” he says. “I couldn’t be worrying about light blocking or the camera’s focal points. Khizer told me that I just needed to act and he would handle the rest.”

I comment that it also seemed as if he wasn’t bothered about how he was looking in the camera, letting his face contort into myriad expressions. It made the scene more realistic. “Absolutely. An actor needs to be uninhibited,” says Gohar. “I run away from makeup. I don’t want to change my skin tone or hide blemishes on my face. If I start worrying about how I am looking, I wouldn’t be able to perform.”

“You know how Daniyal had this very proper, genteel look about him?” he asks. “That’s just a bit of oil and water added to my hair. So much better than going through hours of styling and having products added to my hair!” he laughs.

Did Gohar personally like the episode? “Honestly, I just watched it to see what blunders I had made. I could spot a few!” he says.

I can say honestly that I couldn’t. For me, at least, Laapata has so far been a very interesting watch largely due to the malevolent nuances simmering beneath Daniyal’s calm, good-boy exterior. Gohar’s character was fairly predictable in the initial story. He was the boy the girl didn’t want to marry, wooing her with a self-deprecating half smile and slightly watery eyes. Incidentally, Gohar has been playing this boy far too often recently – last year’s ‘Ishqiya’ and ‘Raaz-e-Ulfat’ come to mind – and it would have been pretty boring had Daniyal turned out to be wishy-washy. I do like mean, bipolar Gohar better than too-good-to-be-true crying Gohar! (image via GEO Entertainment)

Is he quite as sick of the self-sacrificing, heartbroken good boy as I am? “I don’t like extremes,” he muses. “The very good hero can be boring but so can the all-out villain. Ideally, I want to play characters that have grey areas, like Daniyal. It was a challenge for me to transform him from good to evil and to keep the audience hooked.”

Gohar has played the bad boy very well in the past as well. In fact, my last interview with him had been long long ago when we had dissected the abusive Mikaeel in Mann Mayal. What clicks with him better – good guys or bad guys? “Honestly, the good characters are easier to enact. They are so simple. All you need is a bit of glycerin in your eyes and then, you shed a tear and smile sadly. You’re done!” he laughs.

Mann Mayal had been a huge hit and following this, Gohar had started getting offers for far too many villainous roles. Likewise, last year, he became a popular choice for playing the good guy who the girl doesn’t like initially but who eventually wins her over because of the purity of his heart. Was Gohar also hesitant to sign on to Laapata because he didn’t want to risk getting stereotyped as a villain again? “Yes!” he says. “I would just rather avoid getting typecast into any one kind of role. Unfortunately, most of our dramas tend to just repeat characters.”

Image via the HUM TV Network

A lot of young boys entering the field dream of playing heroes. Gohar’s career graph, though, boasts an impressive list of character roles. Did he never dream of being the quintessential chocolate hero a la Shahrukh Khan rather than the character with grey shades? “Honestly, every actor who comes into the industry wants to be a hero. So did I!” he reveals. “During my journey, though, I have explored myself and defined my strengths and weaknesses. The classic hero’s path is not mine but the character, with layers and shades, allows me to fulfill my cravings as an actor.”

“Look how the world’s way of storytelling is changing. Even a Shahrukh Khan has now diversified from playing the chocolate hero to character roles – a dwarf, a crazed fan. Bollywood’s leading men today act in off the wall, alternative stories rather than straightforward romances.”

One hopes that similar stories start getting told more often in Pakistan, setting aside the domestic dramas and focusing on new genres that create noise and start conversations. Our actors can undoubtedly rise to the challenge of taking on nuanced, complicated roles.