Fire and water. Revelry and anguish. A boy and a girl in love and a series of lynchpins that form part of their story. The trailer to Sarmad Khoosat’s ‘Kamli’ released one month ago, a two minutes long mixed bag of visuals that tease, intrigue, even disturb but don’t reveal much at all about the story.

The movie which releases in cinemas across Pakistan on 3rd June is described by its director as ‘a tale of love, loss and cloaked secrets’. Featuring Saba Qamar, Sania Saeed, Nimra Bucha, Omair Rana, Adeel Afzal and debutante Hamza Khawaja as the male lead, there is certainly an element of mystery to the trailer. The visuals are cacophonic, flashing from glimpses of romance and joy to pain and violence. It’s dramatic, unnerving but also beautiful.

Adding to the beauty is the movie’s soundtrack which is now releasing one song at a time. ‘Mainu Tu Tu,’ sings the legendary voice of the late Reshma in a hitherto unheard track which has been reproduced for the movie. Slow, haunting, her voice seems to be echoing from the sky above – the song gives one goosebumps. “It’s like a gift from heaven,” describes Sarmad Khoosat and his words ring true.

There is much more to the carefully curated soundtrack, produced by Saad Sultan. Atif Aslam sings the kalaam of Baba Bulleh Shah in ‘Mukhra’, a song composed by Zulfiqar Ali who has helmed many Lollywood hits in his career. Zeb Bangash’s voice lilts in the romantic ‘Kaash’, along with Sohail Shahzad. Zenab Fatimah Sultan’s soft, raw vocals sing ‘Paani’ to a video which shows Saba and Hamza submerged in deep water.

“I say with great confidence that this movie displays Saba Qamar’s talent like never before.” – Sarmad Khoosat

“There are six songs that we are releasing one by one,” says Sarmad. “Kamli’s original script was written without the incorporation of songs but then, I removed entire dialogues and replaced them with songs.”

According to the director, one of the main reasons for including a musical soundtrack was that he wanted the movie to have commercial aspects to it. “The reason why many directors got bored with TV productions is that they became too mainstream, following staid formats rather than telling stories in creative new ways,” observes Sarmad. “With cinema, I can tell stories the way I want to but at the same time, film is too expensive an endeavor to be made just for creative satisfaction. There need to be commercial elements so that a filmmaker can earn. If nothing else, I want to make more movies and for that, I need to be able to get some returns from this one.” 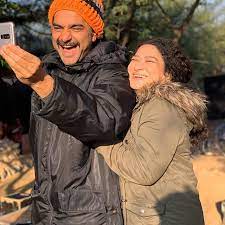 And yet, Kamli is hardly your typical commercial entertainer. Sarmad contests my observation, “What do we categorize as commercial cinema? This movie has a concoction of song, romance, a strong story. If people attach certain expectations from a movie featuring Sania Saeed and Nimra Bucha, then they wouldn’t be wrong in doing so. I have directed the way I wanted to but it is up to the audience whether they identify Kamli as commercial or non-commercial.”

With a stellar cast on board, the acting is expected to be in a different league. “I say with great confidence that this movie displays Saba Qamar’s talent like never before,” asserts Sarmad. Why, though, did Sarmad enlist a debutante as his male lead, the single unknown face amongst a motley crew of veterans? “I had a specific image for the male lead and Hamza fit into it,” reveals the director. “He looks disheveled, in a good way and the teasers describe his character as a ‘mysterious wanderer’. From that perspective, there is a mystery to him because he hasn’t been seen on screen before. I also think that there is an advantage to featuring a fresh face because people don’t associate him or her with a previous project or particularly, a drama.”

Kamli’s initial teasers, trailer and music have been crafted with great finesse and have won rave reviews. Does that make Sarmad excited? “Yes, but it also makes me anxious,” he admits. “The cinema audience has changed from the times when local movies would be seen by the masses and tickets would be economically priced. I would like to believe that a contingent of the people who come to see movies now are eager to experience new forms of storytelling.”

From the first few glimpses it is evident that Kamli is trying to tread new ground in local cinema. But that’s all that one can tell. The rest is still a mystery – an intense, vivid, heady one that leaves you wanting to see more.