A 12 minute short film, the first 45 minutes of a woman’s morning – but while it may be succinct, the heavily nuanced Prince Charming scuttles inside your head long after you’ve seen it.

The short film, which can be streamed on SeePrime’s YouTube channel, boasts some heavy duty credentials. It is actor Sheheryar Munawar’s directorial debut and stars Mahira Khan and Zahid Ahmed. The teasers, hinting at a dark take on marital life may have been intriguing, but it’s a fact that the stars helming the film are going to be the main draw for the online audience.

This is just as well. The hugely popular cast and crew may be the initial hook but once the story begins, Prince Charming embarks on a riveting journey of its own, lilting to a score inspired by the works of Japanese composer Shigeru Umbeyashi, that slows down and then gathers pace, like the rise and fall of emotions on screen, acted out to the poetry of Ahmed Faraz. The story is off the wall, layered with meaning, the visuals colored in melancholic blues and green reminiscent of French art movies.

Mahira Khan is Sherezad, shape-shifting from the housewife preparing morning breakfast to a doting mother sending her little girl off to school to a woman having clandestine conversations with her lover. There is so much to read in her jilted movements, the vacant look that seeps into her eyes and in the short conversation that she has with her husband. Zahid Ahmed, is the busy husband who cares but perhaps needs to care more. The 12 minutes that encompass the film offer just a sliver into the couple’s life, dwelling on the ebbs and flows induced by post-marital depression. 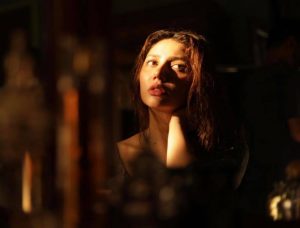 It is an important subject, one that has rarely been the focal point of a story. Prince Charming is, of course a very short story, but it leaves you musing over it much later. Why did she move the way she did at that point? What did he mean when he talked about her drinking ‘dum ka paani’ (water with Quranic verses said over it)? Did he misconstrue her mental predicament to be rooted in the supernatural? His and her shoes point in opposite directions; he doesn’t look at her while they have breakfast; what does she yearn for and does he know of it? The dialogues cut off to Faraz’s couplets and then, the music breaks through. What does Sherezad do for the rest of the day once the story, penned by Sheheryar Munawar, ends?

It is not your typical all-star production, pandering to popular genres of entertainment. But it is an indication that stories like these, too, can be told in Pakistan. There can be diversifications in light and shadow and in storylines. OST’s by popular musicians can be replaced by poignant instrumentals. Mahira Khan, the country’s most-loved sweetheart, can be upended to emulate a haunted, troubled woman. Zahid Ahmed, an actor renowned for his realistic roles, can do magic with his distinctive timbre. A mainstream, popular romantic hero – Sheheryar Munawar – can direct a short film that is beautiful and experimental.

TV and its commercial trappings can be sidestepped occasionally to create innovations on the Web. It need not be an extensive extravaganza – it can be a few minutes’ long, thought-provoking story. As is Prince Charming.