You’d think that we’ve never had a red carpet affair before in Pakistan. You’d also think that generally fashion has always been at a high at our awards ceremonies. This year’s Kashmir Hum Style Awards (HSA’s) were followed by a deluge of criticism and all-out bashing. There were people who posted images of particularly ghastly red carpet fashion – to be fair, there was so much to choose from – and queried, “Is this style?” The fatalistic ‘RIP Style’ proclamation was made. And then came the many, many rants about the skin show on display.

Perhaps the lull in events due to the coronavirus had made people forget that risqué occasion-wear always tends to surface at awards ceremonies. They may not like it but this isn’t the first time that a neckline has dived deep down or a midriff has been bared at an awards show. If they don’t like it they can criticize but they can’t really pinpoint any one single event for having featured skin show.

Actress Seemi Raheel’s diatribe revolved around why Western silhouettes needed to be worn at an awards show. She does have a point simply because most Pakistani women don’t feel naturally comfortable in a slinky gown. Most don’t have the physique to make it look good either. In fact, my favorite look from this year’s HSA’s is of Mehreen Syed, in an exquisite pearl white sari by Faraz Manan with an embroidered backless blouse.

But this is an exception – not everyone is able to steer a conventional sari into glamorous, elegant directions. There were some other innately Pakistani statements that were a hit: designer Rehan Bashir in a neat, well-cut sherwani and model Hasnain Lehri also in a sherwani. 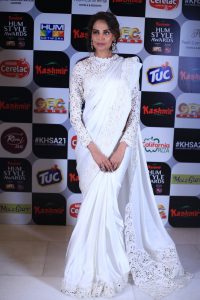 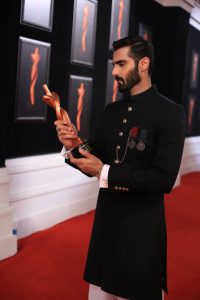 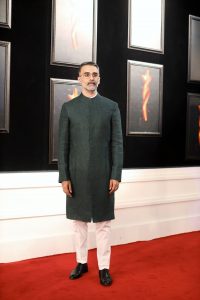 However, had most of the famous faces opted for Eastern silhouettes, you could count on people quipping that they looked like they were at a Valima. In fact, if you throw your mind back to the Lux Style Awards in Lahore in 2019, this is exactly the joke which was directed towards actress Mahira Khan who was wearing an all-white lehnga and fitted shirt created by Faraz Manan. For one, not everyone can wear a gown – or make one!

The very young model Maha Tahirani wore a glamorous silk gown by Sana Safinaz and looked exquisite. Models, however, are accustomed to managing complicated clothes and are usually as comfortable in Western silhouettes as they are in a three-piece shalwar kameez. They also have the svelte figures to make the look work. Very few are able to carry off an anglicized, slinky, fitted gown easily but Maha Tahirani and Maya Ali totally can

Usually, though, gowns are hit and miss. Resham for instance, wore a long yellow creation which was far too busy. Alizeh Shah’s off-shoulder puffed up black dress was bashed for the skin show but it was also a bad fit and hardly flattering. Not all designers can cut a gown as neatly as they stitch a lehnga. There are some who may understand the nuances, like Zaheer Abbas, who created a fitted black and white number for Urwa Hocane and made Amar Khan look like a Hollywood siren, poured into a silken silver design. Others may come up with a dress that has the seams scrunched up untidily because the silhouette couldn’t be created right or a skirt with the cancan sticking out. There is definitely a predilection towards utilizing substandard fabric: polyesters, blingy unwieldy impure chiffons or just net, from the curtain shop!

If a celebrity has a ‘goan’ fixation, then she needs to choose a design that she’s comfortable with rather than try to transform into Kylie Jenner overnight. She needs to be sure that she can carry off a Western silhouette otherwise she’s very likely to start clutching the fabric and hold it up, a la a farshi gharara. She also needs to work with a designer well-reputed for cutting a neat Western silhouette.

Some of the most glaring fashion faux pas at the HSA’s were courtesy badly fitted suits. Sonya Hussyn, usually completely on point, wore a neon green blazer that could have been very cool had it fit right. Ali Rehman Khan, also an actor who is usually an impeccable dresser, wore a tux that didn’t quite sit well at the shoulders. 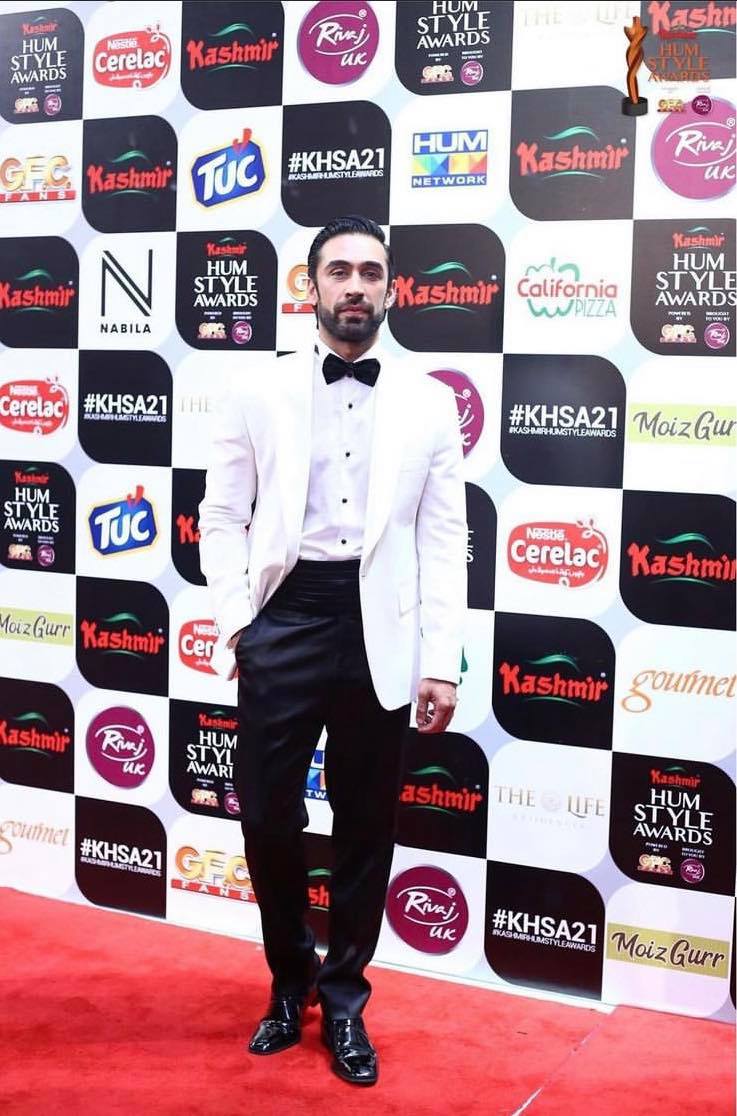 Fashion statements that were all the rage several years ago cannot pass off as trendy. The HSA red carpet was flooded with white sneakers: they were spotted on Adnan Siddiqui, Osama Khan as well as Uzair Jaswal. White sneakers are very comfortable but they stopped being fashion statements about three years ago. Be prepared for trolling

More than ever before, images from an event filter out almost instantly on to social media and the mean, downright cruel comments that follow are inevitable. Celebrities stepping into the spotlight need to toughen up in order to ignore the trolling, particularly if they’ve decided to wear an outfit which leans towards showing skin. Better yet, they could just try to skip out on social media for the next few days. The argument that women – and men – should be allowed to wear whatever they like stands but an awards ceremony, like the HSA’s, is in the public eye. And the public doesn’t take too kindly to anglicized reveal-all gowns, particularly those worn by favorite actresses who may have on-screen avatars that are completely in contrast: the good bahu, the reliable sister or the holier-than-thou girl next door.

Trolling is vitriolic to the core and must wreak havoc on the mental health of celebrities. On the upside, social media scandals have a life of only about two or three years, before the next hashtag starts getting slammed. Go crazy or opt for some sharp tailoring but be yourself !

Which brings us back to those goans. I wish some celebrities read this little story because once and for all, the goans and the fracks need to be ditched. Because they hardly ever look good. Because they lie at the crux to all those snide remarks on ‘is this what style is at a style awards ceremony’?

Yes, unfortunately, this is what style tends to be at a Pakistani awards ceremony. This is what it is in most red carpet affairs, from awards events to fashion weeks to solo shows. It’s sad. It’s ghastly. It gives trolls a field day. But that’s what it is.

Review: All that you need to know about the Tich-Button Joyride!