Fashion weeks in Pakistan tend to oscillate from brilliant highs to utter lows. But they do steer the wheels of the business of fashion and with the coronavirus having wiped them off the calendar so far, I do miss them. Every season, there are certain designers who work wonders on the catwalk. They may be surrounded by a steady stream of copycat designs and mundane commercial concoctions, but they stand out through their artistry, finesse, experimentation or diligent odes to timelessness.

There are certain veteran labels that almost always deliver but there has also been a slew of young designers who have shown a lot of promise. Some of them have subsequently built their markets while there are others who won rave reviews but then chose to take a backseat. Over the past decade, some of the brightest sparks to have emerged into Pakistani fashion have opted to work with established design houses rather than build their eponymous labels. Some others have chosen to operate away from the spotlight.

It’s a loss for Pakistani fashion, for they had brought refreshing new takes on design. Holding their own on the catwalk, they could have really reinvented aesthetics and dragged fashion out from the ennui that it so often slips into.

Here are some of them, sorely missed at local fashion weeks. I hope they make a comeback soon…

Fresh off the Pakistan Institute of Fashion Design (PIFD), Akif Mahmood debuted in 2010 at the PFDC Sunsilk Fashion Week with a vivid whirl of colors and embroidery inspired by the Kailash region. In subsequent years, his most memorable collections were the ones that paid homage to cultures: Spanish bullfighters, subcontinental princesses and my personal favorite, a vivacious tribute to Lahore’s festival of kites, Basant. On Akif’s canvas, the kites streamed up the length of a silhouette, flitting about the ornate architecture of old Lahore with tiny details of the buildings captured in embroidery. Basant, be mine! My favorite collection by Akif Mahmood

It could be that I grew up in Lahore and remember Basant fondly which is why I still remember the collection so vividly. But to be honest, even someone who has never experienced Basant would be able to appreciate how standout some of the clothes were.

Akif now works with Elan and I do know that he’s very proud of the work that he has done with the brand. He also continues to create designs of his own, in a very limited capacity. He surfaced on to the PFDC Sunsilk Fashion Week catwalk in 2018 with a capsule line as part of the PEL Craft/Design show with GOLD by Reama Malik.

But he needs to come back to the catwalk on his own – soon!

Yet another bright spark, emerging out of PIFD, making catwalk magic. Mohsin Ali worked marvels at fashion week whenever he participated: mixing textures, playing with geometrics and colors, adding spunk and kitschy glamor to the usual conventional silhouettes. His solo shows stood out as did his collaborative shows with Nickie Nina and Libas. 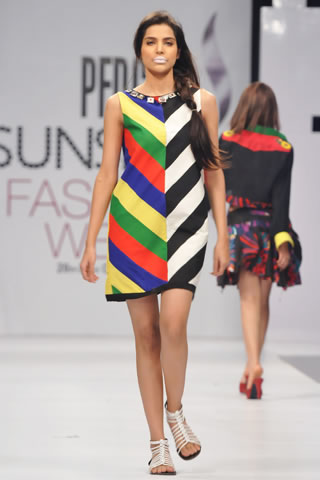 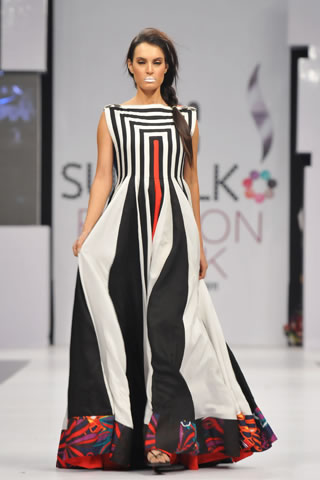 And then, in the midst of flying solo, Mohsin decided to join the brand Sana Safinaz. He’s been very happy working there ever since but there’s no doubt that if, someday, he decides to launch his own label again, it’s going to be making waves.

For years, Fahad Hussayn was a star at fashion weeks. He had a penchant for detailed, complicated designs, the most tongue-in-cheek extraordinary prints and he sets the stage for them with the help of theatrics and OTT styling. Fahad’s bridals were enmeshed with the most minute embroidery and his catwalk brides came decked out wearing ostentatious crowns, masks and multiple layers of jewelry. He once told me that he had even created all the crowns for his show himself. Standing backstage during his show, he would be tense – having invested so much effort, he would want everything to proceed perfectly, just the way he had imagined it. Often, it did not and then Fahad would get very angry. His peers put it down to his ‘artistic temperament’ because Fahad, undoubtedly, is an artist. 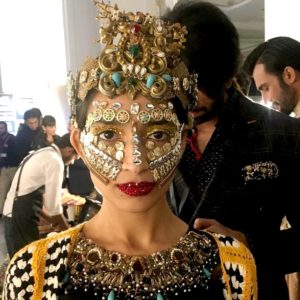 There would be more: models would dance during his shows, read out prose, a ballerina could suddenly come forth and begin pirouetting. Even his take on lawn, the Print Museum lines, were in a league of their own – statement wear that you would want to wear again and again. I’ve always been a huge fan of lawn a la Fahad Hussayn!

I even looked forward to the names of Fahad’s collections: ‘Kaala Paani’, ‘Dara Shikoh aur Sunehri Churail’, ‘Agnikot’, ‘Labyagawachi’ and ‘Suraiya Titanic’, among them! Obsessive and creative, Fahad has been fashion’s favorite wild child for a very long time. Fahad’s always had a penchant for complicated, intricate bridal design!

It was sad, then, when earlier this year he announced that his brand had undergone bankruptcy and he would be closing down his business. What would fashion week be like without Fahad’s theatrics? Even the backstage gossip couldn’t be as much fun without Fahad throwing one of his usual tantrums.

But then, fashion weeks for the spring/summer season got cancelled altogether due to the coronavirus. Perhaps, once things get better, Fahad will be making a return? If not immediately, then maybe a little later?

Adnan Pardesy’s wizardry has always been remarkable. He graduated from the Asian Institute of Fashion Design and debuted on to the catwalk back in 2008. It was the first showcase in a repertoire that now extends over a hundred shows, in Pakistan as well as abroad. Over the years, Adnan has spun out so many memorable collections: ‘Labyrinth’, in monochrome, with its extraordinary pleating, the minimalist ‘Chthonic’ with its avant garde construction and quilted details, ‘Ellipses’, worked with embroideries and applique and his extraordinary take on ‘Gota’ in HUM Showcase 2017. 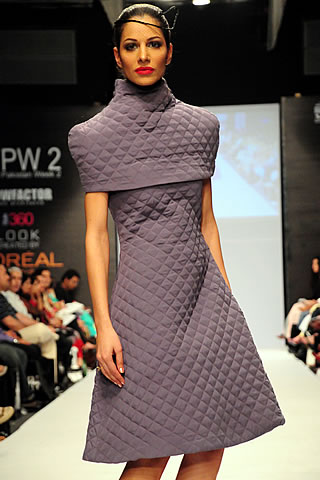 Adnan’s last show, however, was in 2018. He has, since then, taken a break but is now working on a new line-up. I do hope that he returns to the catwalk soon, once the coronavirus is over. Back in 2017, when everyone was creating pretty wedding-wear with gota, Adnan twisted it into fantastical statement-wear

Protégé to the great Teejay, Feeha Jamshed carried her father’s mantle forward with a ‘Teejays’ collection before launching her own eponymous label ‘Feeha Jamshed’. 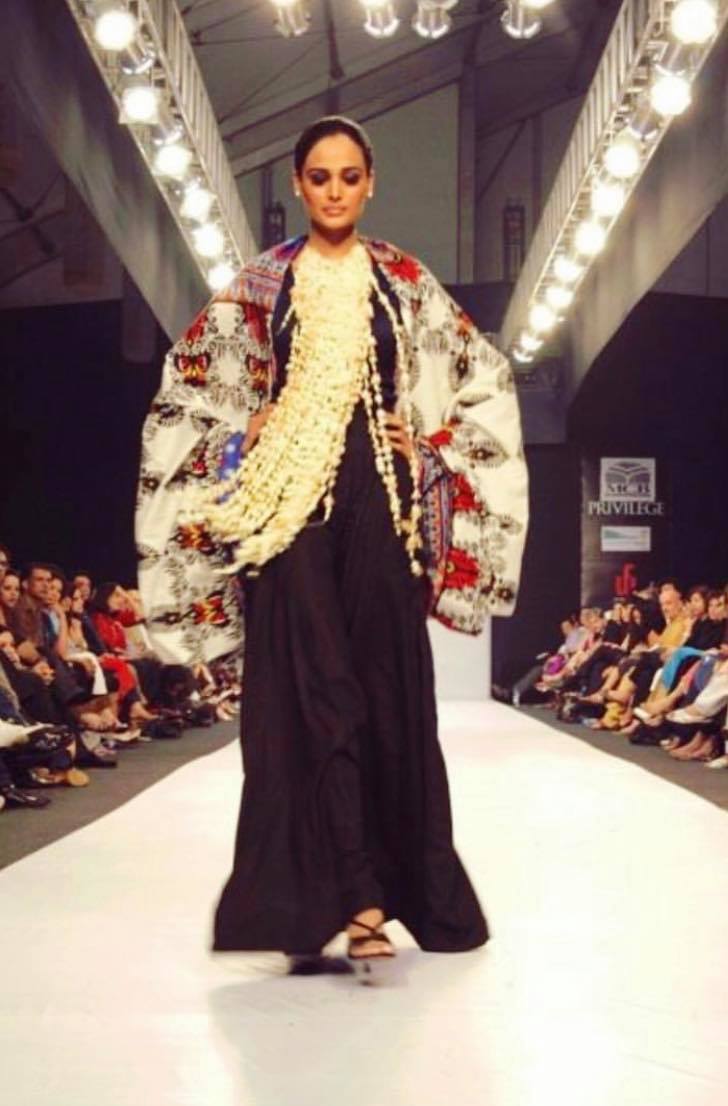 Brilliant and extremely committed to creating authentic design, Feeha has always stoically worked according to her own vision; adding innovations to silhouettes, tweaking embroideries in new ways, fabulously creative but also, following in her father’s footsteps, making sure that her clothes are wearable: a hit ‘janitor jumpsuit’ which was quickly picked up and replicated by other labels, safari suits and tailored dresses in geometric monochrome and a brilliant ‘bob’ print that formed the essence of her ‘Bob Squad’ show. Even off the catwalk, Feeha’s social media feed has always stood out with its assured, unique vision for design. 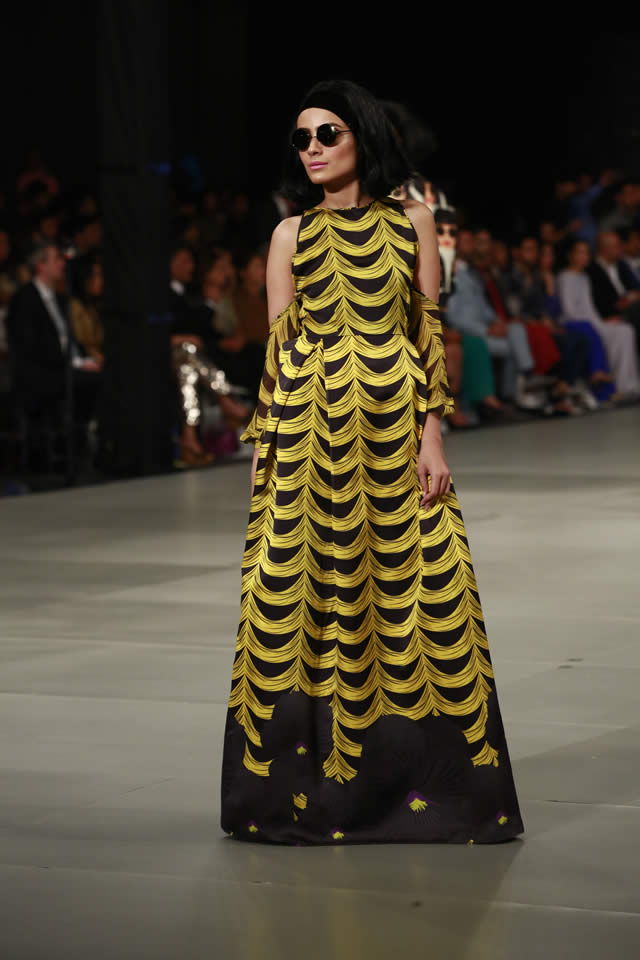 For a while, health issues slowed Feeha down but even now, when she is designing again in a smaller capacity, she prefers to stay away from the catwalk. Time and again, she has said that she doesn’t want to associate her designs with the mediocre, often plagiarized work that frequents local fashion weeks. Then again, only the truly exceptional designers can up the ante at fashion weeks. If they back out, then mediocrity is bound to run rampant.

I hope that one day, I see Feeha Jamshed’s work on a catwalk again, if not at the fashion weeks that she is so averse to, then perhaps in a solo show. A textile designer from the Indus Valley School of Art and Arhcitecture, Sanam Chaudhri has a keen eye for artistic design and she played it out so well on the catwalk. Amongst the collections that I remember most vividly, ‘Kage’ was a bright mix of geometric print om free-flowing silhouettes, ‘Pandora’ was an anglicized interpretation of formal wear, ‘Citron’ featured cowled necklines, pleats and bright colors and ‘Bano’ her take on luxury formals. 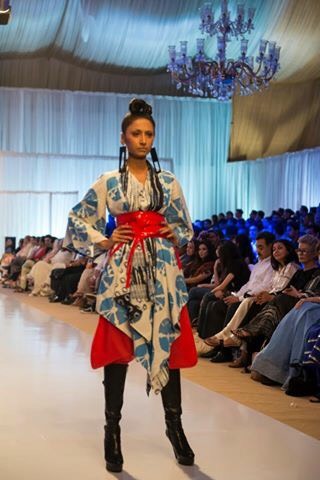 Over the past few years, though, Sanam has been quite vocal about how fashion week doesn’t always translate into business for designers. Opting to stay far from the madding crowds of fashion councils, Sanam has been busy creating very regular capsule collections, promoting them via social media and exhibiting them at multi label stores as well as in her own retail space. She did venture on to the catwalk earlier this year, with her 2020 Resort Collection show at the German Council’s residence in Karachi but so far, it’s been a one-off. Combining her flair for design with her focus on retail, Sanam’s return to showcasing regularly would be very interesting. Provided that she wants to be part of the fashion week rigmarole.