‘Khel Khel Mein’ is for the all-out patriot. It’s a movie peppered abundantly with nationalistic statements and constant throwbacks to the historic struggles faced by Pakistan. The ‘enemy’ state right next door also gets bashed quite a bit – a common characteristic found in nationalistic movies made on either side of the border.

At one point during the first half of the movie, Zara, the female lead played by actress Sajal Aly, declares, “There is only a single paragraph in history books about the war in 1971 that lead to the fall of Dhaka while there are long accounts of Mughal kings, their lifestyles, the horses they liked …”

Zara’s emotional speech impresses the college principal, played by Marina Khan, to the extent that she and her friends are allowed to fly to Dhaka to take part in a theatre festival, where they stage a play narrating the sad events that led up to and followed the 1971 war. The play, like the movie itself, is titled ‘Khel Khel Mein’ and just like that, while playing around on stage, the young group of thespians are filled with patriotic fervor and a sense of loss resulting from the bifurcation of Pakistan all those many years ago. 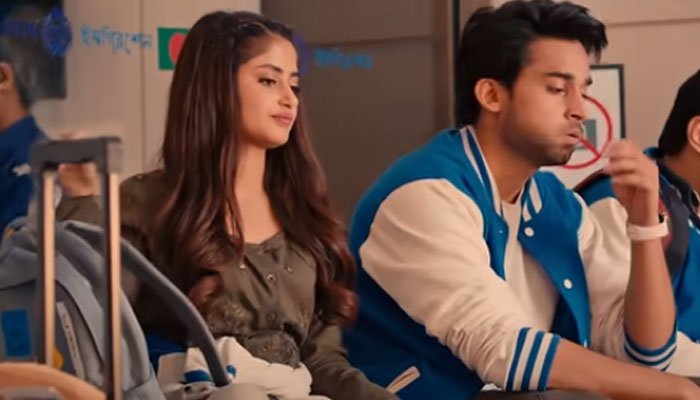 Zara is particularly invested in the play because her grandparents got estranged when East and West Pakistan broke up. Her grandfather had been lost to the family since then, something that distresses her and drives her far too frequently into tears. She is initially ridiculed. Saad, played by Bilal Abbas, and an enthusiastic member of the institute’s Dramatics Society, says at one point, “Haaray huay match kee highlights kon dekhta hai?”

There are plenty of one-liners like these throughout the movie, in the quintessential Filmwala Pictures’ style. Nabeel Qureshi and Fizza Ali Mirza, co-scriptwriters as well as director and producer respectively, do have a penchant for wordplay. This is one of the movie’s highlights.

The first half continues with humorous sequences flitting through college life, secret rehearsals and a quick trip to Balochistan where they attend a funeral. There is talk of how an ‘enemy’ is trying to tear Pakistan apart by wreaking violence and trying to turn one part of the nation against the other. “Iss mulk ko rakhna meray bachon sambhal kay,’ streams out in a melancholic strain while the camera spans large expanses of Balochistan’s terrain. The overall soundtrack is absolutely playlist-worthy. The visually pleasing, neat camera work is another highlight. One wishes, though, that so many events had not been jam-packed into the first half alone. Even an accomplished director, which Nabeel Qureshi certainly is, can’t work wonders with a script that rushes, break-neck from one twist to the next.

Following the intermission, the troupe lands into Dhaka where they fend off sarcastic comments from their hosts who foster a preconceived dislike for them and the wiles of an aggressive Team India lead by a sneering – very believable – Naveed Raza. The Indian contingent also includes a gregarious, jolly Sardar Jee who hugs Team Pakistan, congratulating them on allowing his religious fraternity to enter Kartarpur without a visa. There are plenty of jokes about ‘fantastic’ teas and pigeons being considered spies. The jingoistic declarations and political wisecracks are many. Sometimes, they are funny. Eventually, they do get done to death.

Shining out in the second half is Manzar Sehbai and Sheheryar MUnawar in impactful, emotional roles that bring on the waterworks. Most of the cast, in fact, performs well. Bilal Abbas and Sajal Aly are accomplished actors who shine on the cinematic screen and although I wish that Marina Khan and Javed Sheikh had meatier roles rather than small appearances, the ensemble cast is generally good. The enactment of the play, Khel Khel Mein, is particularly very well-choreographed.

However, one expects quite a bit more from a movie made by two of the country’s leading filmmakers. The music is great, the direction impeccable but the stories wavers here and there. Why does Zara cry so often? The backstory about her grandfather is an apt explanation but it only gets emphasized much later in the movie. I will refrain from giving away spoilers but why does Zara seem to simply forget a mission that she has been obsessed with, once her play has been a success? Also, why is this illustrious institute for business students so wholly obsessed with shutting down the Dramatics Society? An Indian girl sharing a room with Zara in Dhaka is seen staring out ominously when she hears Zara’s conversation with her father. This girl, then, isn’t shown and the audience is expected to connect the dots and figure out how she managed to create trouble. Also, the characterization of Team India was unidimensional – they were irrefutably mean with the exception of the Sardar Jee who was stereotypically rotund and jolly.

The expertly recreated scenes from Dhaka, 1971, were particularly gripping and showcased Nabeel Qureshi’s prowess as a director. I wonder, though, if the violent parts mean that young children won’t be able to watch the movie.

The plot relies heavily on the war of 1971, opting to tell our side of the story. Historians may beg to differ and more nuanced storytelling would have made for a far more sophisticated movie. There are always different perspectives to a war and ‘Khel Khel Mein’s narrative follows the quintessential style of all nationalistic movies: meant to inspire patriotic fervor through and through, no questions asked.

The movie, nevertheless, manages to hold its own by virtue of its actors and director. Sajal Aly and Bilal Abbas are brilliant actors and Nabeel Qureshi, a brilliant director. There are humorous moments and some great music. Also, this is the first local release in cinemas following a nearly two year long Covid-inflicted lockdown and that in itself is a reason for celebration.