The stars shone bright and so did a magnificent stage set up with colossal screens and lighting. The second edition of the Pakistan International Screen Awards (PISA) that took place in Dubai were intent on taking off in a grand way and in most cases, they managed to do so successfully.

A heavy duty montage of celebrities and media was flown out for the show. A slew of star-studded performances were planned out and Instagram was rife with images of a swinging, power-packed ‘PISA party weekend’. From brunches and lunches to rehearsals to the red carpet, the fraternity came together on international territory and there was plenty of good cheer. BTS clips from the rehearsals floated out constantly. Ali Azmat and Ahmed Ali Butt had a mock late night fight out in the hotel terrace, the night before the show. There was plenty of impromptu singing and ‘it’ celebrity couple spotting, with Yasir Hussain and Iqra Aziz and also, Umair Jaswal and Sana Javed attending. Over at the venue, show director Frieha Altaf customarily hollered into her microphone, intent on getting the performers shipshape and ready to groove. The finale performance by Sajjad Ali was memorable, with the celebrities in the audience standing up and dancing with the singer. The opening act by Sheheryar Munawar and Mehwish Hayat was high on energy. Umair Jaswal’s performance introduced three new tracks that he will be releasing soon; fast, upbeat, electronically mixed numbers that were quintessentially Jaswal. Amar Khan and Faryal Mehmood danced up a storm. Asim Azhar started the show with the national anthem and the hosts for the night, a double act served out by Vasay Chaudhry and Yasir Hussain, were brilliant. The awards, also, turned out to be interesting simply because many of them were unpredictable. Pakistani awards ceremonies – especially fledgling ones like the PISA – have a tendency to relegate the trophy to whoever has turned up in the audience. It acts as bait, ensuring that the winning star will attend the ceremony and besides, most stars enquire about the result before they decide on whether or not to attend. Also, having a star on stage – rather than announce that the winner is not present – is usually preferred by the organizers.

The PISA’s eschewed these inclinations and went on to announce quite a few winners who weren’t there: for instance, Best Actor – Jury winner Mohib Mirza, Best TV Actress – Popular winner Sarah Khan, Best Supporting Actor – Female Hina Altaf and Singer of the Year – Popular winner Aima Baig. It was an intelligent move made by the ceremony and one that will help in establishing its credibility.

There were many more home-truths laid bare by the PISA’s and here’s a quick run-down:

When in doubt, wear a sari 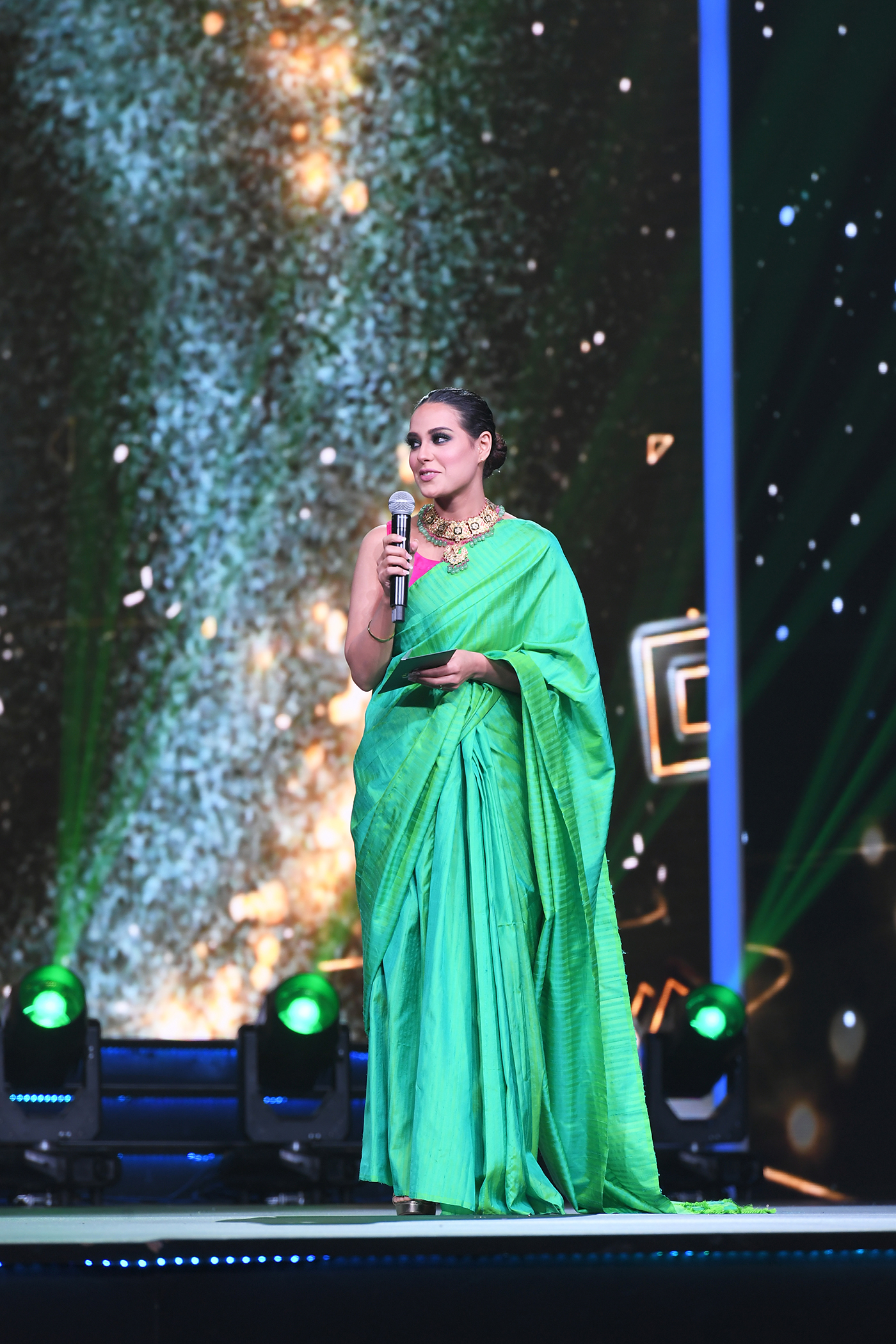 Red carpet pictures have, of late, brought on a deluge of trolling. The desi audience undoubtedly hates gowns and also, ‘goans’, the Pakistani counterpart of the anglicized silhouette, usually consisting of very blingy fabric, stitched into an unseemly sheath, with cut-outs and dangling tassels strewn here and there. Gowns may still be great – desi trolls will disagree – but ‘goans’ are truly hateful.

Perhaps this was the reason why a lot of women attending PISA opted to wear the much more acceptable – but equally glamorous – sari. Another reason could be that having attended a long spate of awards ceremonies, with PISA being the latest, the girls had simply run out of gown options.

There’s nothing better than a slinky sari and so many of them carried it so well: Hania Aaamir in a minimal light gold sari, Sana Javed opting for a silken emerald green by Umar Sayeed with a hand-worked blouse peeping out from within the folds, Sonya Hussyn opting for a rusty orange design by Sania Maskatiya with embellished shoulder details, designer Sania Maskatiya in a pant-sari amalgamation and Iqra Aziz merging a brilliant parrot green with pink and setting it off with a heavy kundan neck-piece.

Icons can make a show rock

PISA’s grandest moment was undoubtedly the last performance by Sajjad Ali. The singer is a well-loved icon, his songs are eternally popular and all of Pakistan knows them by heart. The cheering started off with the opening song – ‘Cinderella’ – and continued till the end, when the catchy ‘Mahiwal’ prompted the celebrities in the front rows to stand up and begin dancing. Absolutely euphoric.

Another highlight was Ali Azmat on stage. The singer lip-synced to some of his hit tunes, also singing along with them at times. It made the performance confusing at times and for those who have seen the Junoon heydays, when Ali would be headbanging out on stage, this particular appearance was hardly as entertaining. Nevertheless, this was Ali Azmat, Pakistan’s evergreen rockstar on stage, singing some of his greatest hits. That’s pretty cool. The biggest highlight of the show were the hosts. Yasir Hussain, Vasay Chaudhry and Mehwish Hayat came on stage for short snippets, announcing segments and keeping the flow going smoothly. Mehwish Hayat, who also recently hosted the Lux Style Awards, makes a great host, speaking well and with confidence but the combined wits of Vasay and Yasir particularly took center stage.

The jokes came fast and constantly. Some of them were scripted – Vasay Chaudhry is a wiz at scripting awards show repartee – while others were impromptu observations, made on the spot and extremely funny. The hosts particularly made the show extremely entertaining. I do want to see more of these two together, again and again.

The hazards of the foreign red carpet

Awards night red carpets are typically crowded with fans and photographers but there’s usually a partition allowing some distance to be maintained. However, at the PISA’s the fans were able to  stream right on to the red carpet, crowding around their favorite star, cellphones tilted for selfies. Although meeting fans is an inevitable reality in the lives of the rich and famous, some of them were visibly perturbed.

“There is no partition,” explained one actress, “and it makes us feel very insecure.”

After the show, once again, the actors got swarmed while they waited for their cars. Arranging transport and security at an international locale for a large number of guests can be tricky but it is a glitch that the PISA’s need to iron out.

The ones who couldn’t make it

A show taking place on foreign ground and shouldering the unenviable task of flying out hundreds to the event is very likely to make logistical errors. The very first PISA, last year, was surrounded by controversy with a large number of celebrities taking to social media to state that while they were nominated and had been invited, the organizers backed out at the nth hour.

This year, the PISA’s were certainly trying to be more efficient. Visas were arranged weeks beforehand as were hotel bookings and tickets. However, come awards nights, Singer of the Year – Popular nominees Baluch Twins took to social media to complain about how their tickets had been ‘refunded’ by the organizers. The management responded that the Twins were unable to board a plane to Dubai because two Lahore to Dubai flights got cancelled and had gotten rescheduled. “Covid advisories, the T20 series and the Expo traffic all contributed to the unfortunate situation …” read out the official statement.

The Twins postulated whether their exclusion could have been because of their Baluch origin or because they hailed from the less privileged Liyari neighborhood. This was a card that they shouldn’t have played, especially since Abid Brohi, also a Baluch, was there at the event. Model Hasnain Lehri, again, a Baluch, was present and he took to Twitter to protest that racial discrimination should not have had been made part of the argument.

Being a Baloch myself, I’m personally offended that ethnicity and racial discrimination has been made part of the Baloch Twins controversy. Do we need to be divisive in an already polarised system? It’s irresponsible and dangerous and they shouldn’t have played this card.

What could have been included in the argument was the fact that all major stars were present at the event. If the PISA’s choose to nominate someone, the organizers need to prioritize giving equal respect to all the guests regardless of their fame and popularity. The PISA’s, merely two years old, need to age a bit more before they establish themselves as credible. However, it was the ceremony’s current fledgling status that meant that the celebrities in the audience were generally very happy. If they won, it was wonderful. If they didn’t, well it was only a new awards ceremony wasn’t it?

Still, acknowledgement is always appreciated. An elated Sonya Hussyn broke down into tears when she won the trophy for Best Actress for enacting a schizophrenic woman in Saraab. “Seven years in my acting career, 16 nominations and I finally won an award,” said Sonya emotionally. The ones who lost didn’t seem too perturbed. There was no storming out in between the show – we’ve seen that happen – and no social media rants following the show – classic post awards show behavior in most cases. There may have had been some private ranting but nothing much can be done about that.

The camaraderie, in fact, was heartwarming. Omair Rana and Ahmed Ali Butt, both in the innings for the Best Supporting Actor accolade, came on stage together when Ahmed won, laughing.

Feroze Khan, when he won Best Actor – Popular, took fellow nominee Affan Waheed up on the stage with him. “Would you like to say something?” Feroze asked Affan. “I’d like to congratulate you,” replied Affan. It was awkward – but the great thing was how everyone was all smiles. 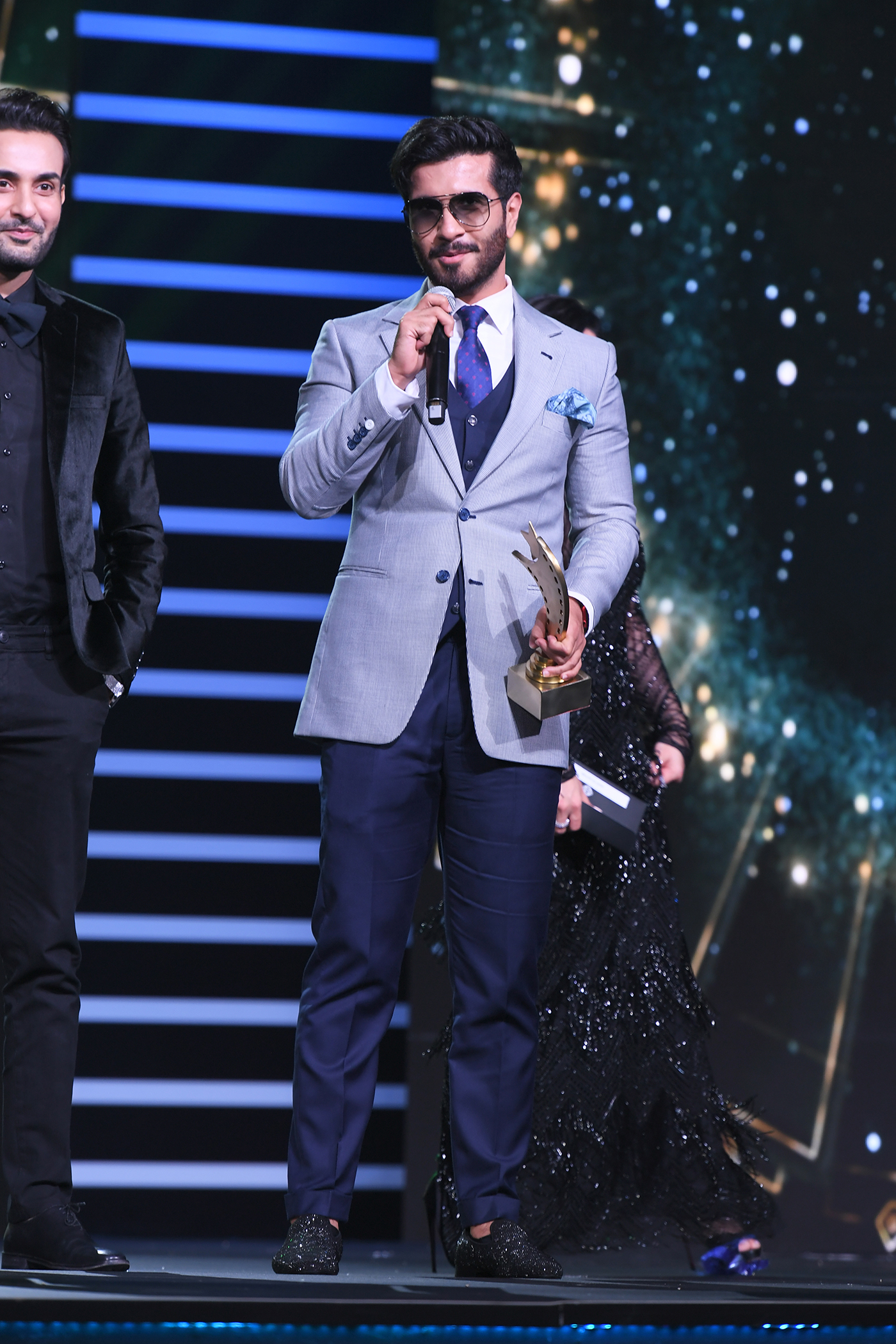 It all culminated in a show which was a weekend long all-out ‘PISA party’. Should the awards ceremony continue with consistent shows every year, aim for credible awards results and become more vigilant about making sure that everyone invited gets flown out, the PISA’s are off to a good start.

Best Use of Humour in Social Media
CBA Arslan Naseer

YouTuber of the Year
Ducky Bhai

Vlogger of the Year
Shahveer Jafry

TikToker of the Year
Jannat Mirza

Model of the Year
Fahmeen Ansari

(All photographs are by Faisal Farooqui @ Dragonfly)