“For a very long time I had been yearning to make a return to comedy and act in a role that would bring something new,” says actor Osman Khalid Butt.

With Chupke Chupke, the regaling hit drama currently airing as part of the HUM TV Network’s Ramzan transmission, Osman has managed to do so. Scheduled at a very competitive time slot when channels are vying aggressively to haul in ratings during the long post-Iftar evenings, Chupke Chupke has been a sensation from its very first episode. The drama has been trending on Twitter constantly, even gaining fan followings in India and Bangladesh. Other channels may be bringing on the exuberant game shows and naagin dances with great gusto, but keeping us fixated is a household bustling with eccentric characters; wisecracking daadis, hilarious antics and a slew of characters that are so endearing that they promise to be memorable for a long time to come. 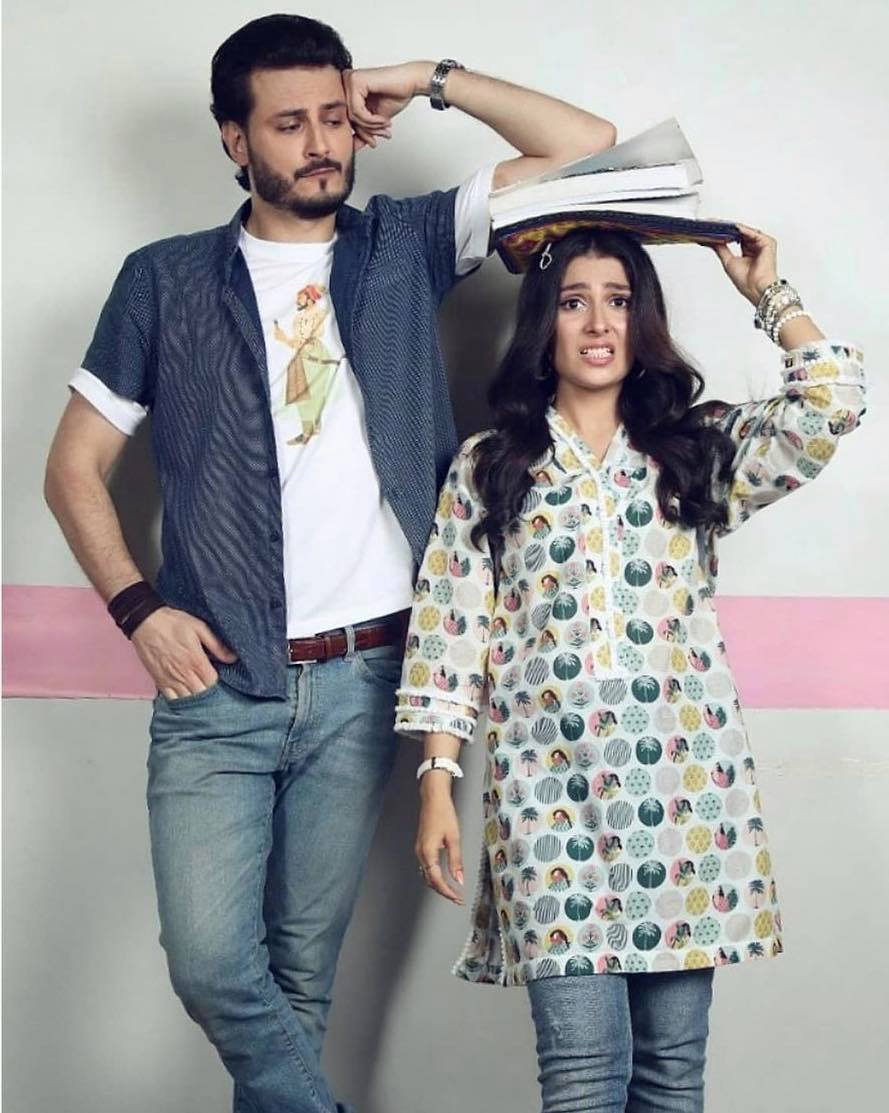 Faaz and Meenu! (via Osman Khalid Butt on Instagram)

There’s a lot that works in Chupke Chupke’s favor: the very intelligent script written by Saima Akram Chaudhry, direction by Danish Nawaz and a stellar ensemble cast. Was the on-screen camaraderie an indication of a happy cast and crew, off-screen? “Yes, that’s the beauty of Chupke Chupke’s ensemble,” says Osman. “The off-screen bonding really helped elevate this project. There was absolutely no sense of ego where a certain actor would try to assert that this was his or her scene. Everyone was milking off each other’s energy and Danish has such a sublime sense for comedy. He gave us the freedom to improvise and some of the top trending one-liners from the drama are dialogues that we just came up with while filming.”

Chupke Chupke is hardly Osman’s first hit drama. The actor has a number of successful hits in his repertoire, the most recent being the ISPR-HUM TV collaboration ‘Ehd-e-wafa’ from last year. And yet, it wouldn’t be wrong to say that he is particularly shining in Chupke Chupke. Faaz, bulldozed by his three sisters and falling unexpectedly in love with Meenu, has shades that are riveting. He has a feel-good bromance with his cousin Hadi and it is endearing to see how his feelings towards Meenu transition; from pure annoyance to the sort of romance that is sweet and has you chuckling. The Bromance, running strong! (via Aaadi Khan on Instagram)

There are little clips all over social media right now, replaying the moments where Faaz and Meenu share a smile or give a little hint about their changing feelings towards each other. Chupke Chupke’s countless fans – and romantics – are making those clips trend. Of course, there’s plenty of craziness interspersed in between the romance, as Faaz tries to navigate his newly married life while sidestepping the other women in his life – his three sisters and daadi.

The off-screen bonding really helped elevate this project. There was absolutely no sense of ego where a certain actor would try to assert that this was his or her scene. Everyone was milking off each other’s energy and Danish has such a sublime sense for comedy.

Recounting his favorite scenes from the drama, Osman observes, “I have enjoyed the scenes that show Faaz’s transition from Meenu’s angry tutor to someone who is beginning to see her and respect her as his wife. In his own home, he’s always had a mildly emaciated existence, being pushed around by his sisters and generally not having anyone listen to what he wants. With Meenu, there are all these little moments.”

He continues with his character analysis, “On the day following their Nikah, she accuses him of letting his sister, Gul, disrespect ‘his Mrs.’ His expression softens when she says this because he’s enjoying the fact that someone is taking ownership of him. At another point, he says that two people should only stay married if they love each other and she haltingly admits that she is beginning to like him. Faaz has longed to be with someone for a very long time and he and Meenu go through a post-Nikah transition where they are initially confused but then, jump across the fence to the other side where they both want to make their relationship work.”

When Chupke Chupke’s teasers and first few episodes were aired, several critics observed that Ayeza Khan, a mother of two, did not suit the role of the gregarious, very young Meenu. Did Osman also have similar reservations? “The criticism was completely unnecessary especially since it started filtering out from before the drama had even started airing. People have a right to express their opinions, by all means, but there are certain boundaries that shouldn’t be crossed. People got downright nasty and crass and I found it really distasteful. The thing about Meenu is that some people have loved her instantly while she has grown on others. Ayeza’s done such a great job.”

He continues, “I admit that a lot of us on set wondered how she’d be able to transition into this frivolous character. She had just played a very serious, negative character in Meray Paas Tum Ho and we wondered how she could become Meenu. But then, she came on set and she was so well-prepared with the accessories she wanted Meenu to wear and all the props that she wanted her to have. She just fitted in so well.”

“Somewhere around my second week of shooting with Ayeza, I felt that there was a certain magic in the air which was elevating whatever was written in our script to something more. Such chemistry is rare.”

Zoning in on Faaz and Meenu’s delightful chemistry, Osman says, “Somewhere around my second week of shooting with Ayeza, I felt that there was a certain magic in the air which was elevating whatever was written in our script to something more. Such chemistry is rare.”

“The added pressure was certainly there, especially because we were shooting a high energy comedy where we constantly had to be in each other’s faces. It helped that we were all constantly laughing on screen. It also helped knowing that this drama would act as an antidote to the depression all around us. I receive so many messages everyday where people are thanking the team of Chupke Chupke for lifting them out of gloom with a lighthearted family entertainer. I suppose we’ve succeeded in doing what we set out to do,” he smiles.

It helped knowing that this drama would act as an antidote to the depression all around us.

And does he think that he, particularly, has succeeded with a role that really makes him stand out? Does he think that this is one of his best roles so far? “I can’t say that for myself,” he laughs.

In that case, I’ll say it. As the hopelessly bullied, lovestruck Faaz, Osman has truly enchanted audiences – perhaps more than he ever has before. It’s the sort of role that truly showcases his talents; yoyo-ing from sarcastic witticisms to a bit of shouting around with the family to a little half-smile and slight softening of the eyes epitomizing the classic romantic hero. And while I am cheering for Faaz, I am also cheering for Osman Khalid Butt and how, finally, he’s playing a role that is spotlighting him so well.

Prior to Chupke Chupke, when I last spoke to Osman it had been regarding a social issue that was trending on social media. He’s one of Pakistan’s very few straight-talking, no holds barred male celebrities, who has never been afraid to hurt a few egos by stating what he thinks is right through his very active social media account. It had been an impassioned, lengthy conversation on Pakistan’s tone-deaf attitude towards a certain cause that was close to his heart.

The conversation I have had with him today is in complete contrast, a happy discussion about a character that Pakistan has fallen in love with, brought to life by Osman.

I hope for many more conversations, soon – on issues that matter and many more roles that make him shine bright.