The last time I met Azaan Sami Khan it was about two years ago, right before Hum Films’ much-touted Superstar was about to release. Merely 24 years old at the time, Azaan had composed the music for Superstar as well as another movie that was coming out simultaneously, Asim Raza’s Parey Hut Love. From young, flippant dance music to romantic ballads and saucy dholki songs, Azaan was winning rave reviews for his diverse, extremely catchy soundtracks.

It was also being said that there was much more to the young musician than just the fact that he was the son of two very famous people, Adnan Sami Khan and Zeba Bakhtiar. Azaan was genuinely talented, a wunderkind with a flair for creating hit tunes, his craft honed right from his early years in a home where music and art were second nature. “I grew up here,” he had told me during our meeting then, referring to the entertainment industry where he was slowly gaining a foothold.

But despite his success as a music producer, Azaan wanted to add a lot more to his repertoire. He wanted to delve in directions that were uniquely personal to him. “When the OST’s for Superstar and Parey Hut Love came out together, it was very overwhelming. All the work of over two years had suddenly released altogether. At that time, my mother told me that I either could set up shop right then and I would get a lot of customers or I could step away, create something of my own and come back.”

Azaan chose to do the latter and he is now back, with an album of his own. His very first single, ‘Mein Tera’, has just released, a romantic melody set off by a glossy video directed by Mohammed Ehteshamuddin. “It’s a great song,” I tell him.

“Really? You’re not just saying that?” Azaan asks. It’s endearing. He’s a star son, friends with the top tier of industry movers and shakers and a major TV network has had enough faith in him to launch their musical offshoot, HUM Music with his debut album. And yet, like any young new musician, he’s second-guessing at whether people truly do like his new song.

“It’s just that I respect the privilege and opportunities that I get,” he explains to me at some point in our conversation. “I am blessed that so many people have already believed in me in this initial phase of my career. Not every newcomer has his first video directed by Mohammed Ehteshamuddin or his first song released by HUM Music. I know this and because so many people have placed their faith in me, I need to make sure that my work is up to a certain standard. I need to make sure that I come up to their expectations.”

That’s a lot of pressure, I comment. He nods, adding, “But it’s a small price to pay. I am not waiting for my song to get accepted or my script to be read. I am lucky and I accept and respect that.”

I ask him that, having grown up with such very famous parents, he must not be attracted to fame per se, like so many other newcomers. “With no credit to me, people did know who I was as soon as I opened my eyes,” he admits. “For me, my work is of the utmost importance. Being famous and going viral is the least of my priorities.”

You could always become more famous, I point out. It makes him laugh.

We delve into his new musical journey, which has just taken off with the just released ‘Mein Tera’ and is going to be followed up with more videos, released one after the other. “I wanted this album to be entirely biographical. Every song is based on a personal experience and I have tried not to make any two songs similar.”

“The thing about creating songs for a movie is that all the emotions belong to the characters. But my album’s songs are all about me.”

The second song from his album is scheduled to release in mid-March and he’s also about to shoot two videos that will be rewinding back into the Karachi of yore. “We’re actually going to be recreating a club that used to be on Bandar Road called Roma Shabana. The first song is called ‘Jaadugari’ and is set in 1945 while the second one, ‘Meri Sajna Re’, dates back to 1965, and Rahat Fateh Ali Khan will be singing with me in it.”

“I have four to five videos in mind. I have written most of the lyrics but I have been fortunate to have been helped by some veteran lyricists. The late Shakeel Sohail sahab would send me corrections on my lyrics anytime I sent them to him. There’s a Pashto song in my album called ‘Zama’ that has been penned by Zaland Khan Mohammadzai. And A.M. Turaz, who has written songs for Bollywood movies like Bajirao Mastaani and Padmaavat has written a song for me called ‘Ik Lamha’. By early November, I want to release the whole album.” 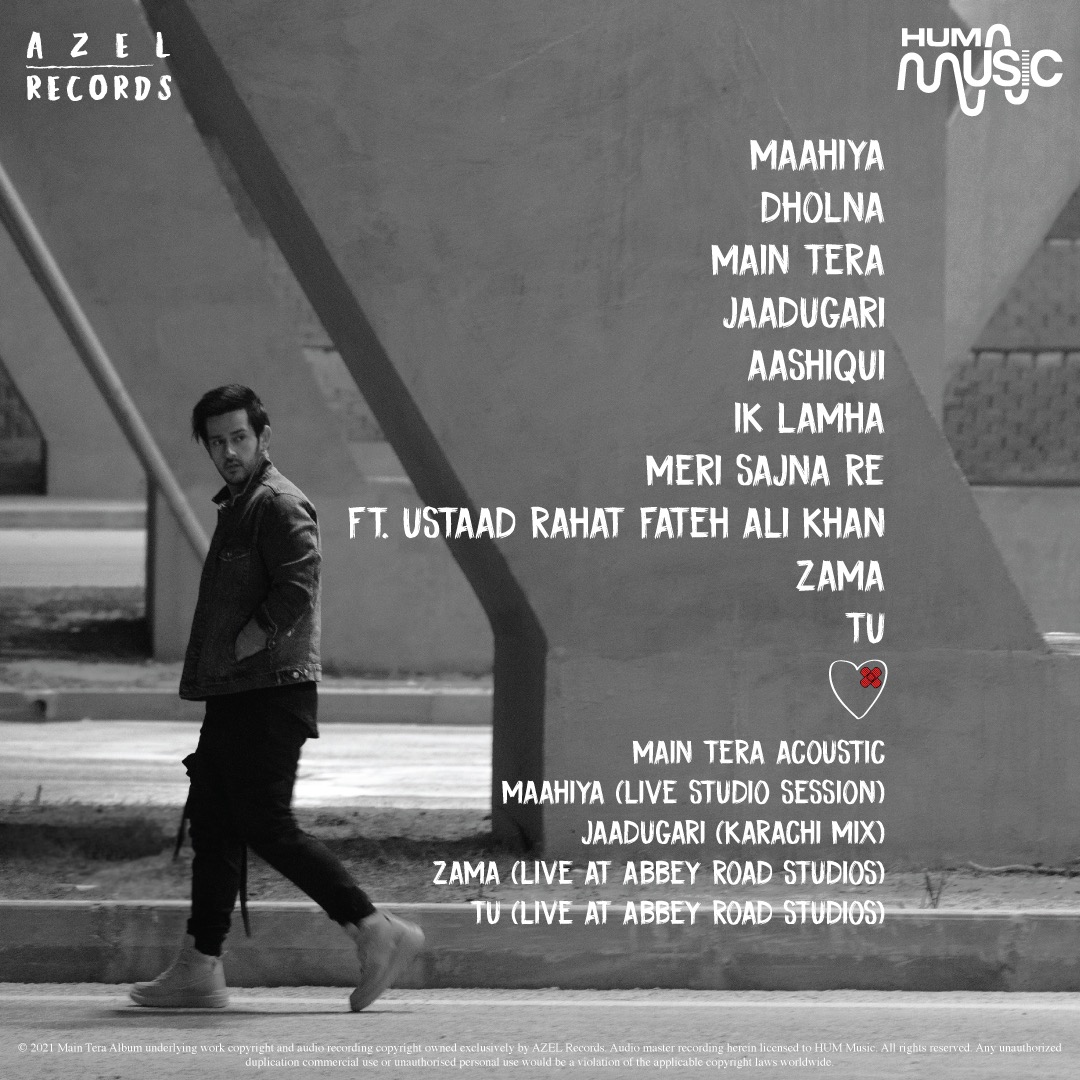 The album’s launch was announced only recently at the 18th HUM Pantene Bridal Couture Week, with Azaan walking out on to the catwalk, singing, for the finale. “It was an honor – and a little scary,” he says. “It was my first time on a catwalk and I only found out later that I was part of their finale. All the models looked good so I wanted to at least look reasonably good on the same stage with them!” He’s looking more than reasonably good, I tell him. “There’s a constant struggle; to do good work and to control my weight,” he says. “For the video of my Pashto song, ‘Zama’, I want to have a certain kind of physique and these days, I have just thrown myself into achieving it. I am working hard to achieve it these days. I am a complete desi food addict. Any time there’s nihari or mithai around me, I want people to eat it up quickly so that I don’t!” he laughs.

“It’s a good kind of struggle, though. It keeps me in check. Copious amounts of nihari and mithai aren’t good for anyone!” He continues, “Everyone in my home is a foodie, including my mother. But she is the most disciplined person I know. There has never been a day in my life when I haven’t seen her exercise.”

Aside from the album cover, isn’t he also maintaining a certain kind of look for his movie debut with Hum Films, ‘Patakh De’, which was supposed to begin shooting around last year? “I don’t really know what’s happening with the movie,” says Azaan. “The soundtrack is more or less finalized. It’s been created by Shiraz Uppal and it is amazing. I do know that the movie has to be shot in the winter but over the past 10 months, my focus has been solely on my album.” With the local film industry struggling due to the coronavirus, would he consider making his acting debut with a drama instead? “There are talks,” he smiles, “but nothing is confirmed yet. I am not the sort of person who would ever say that I won’t ever work in this or that industry. If it excites me, I’ll work in a drama or create a drama OST. It was during Superstar’s promotions that I realized just how huge Pakistani dramas are.”

We move on to trickier territory; one that Azaan is resigned to treading since his father, Adnan Sami Khan, is such a celebrated musician – and such a controversial one. “I am not on Twitter because I think his Twitter feed is more than enough for the whole family!” he quips.

Adnan’s very active Twitter feed is frequently quite vicious towards Pakistan, a change that has ever occurred ever since he switched nationalities from Pakistani to Indian. Azaan refers to a conversation we had when I last interviewed him: “Even back then I told you that I am working in Pakistan for a reason. My father works for one of India’s biggest record labels and it wouldn’t be a problem for me to launch there. But Pakistan is my home. I just don’t want to have to prove my patriotism for the rest of my life.”

He continues, “What upsets me as a son is that a lot of the younger generation are not fully acquainted with my father’s work. All they associate with him are the controversies. I can’t defend the choices that he has made but I say this with a lot of conviction that no one can put a finger to his work. Every two or three decades an artist comes along who massively impacts entire techniques and my father is one such artist. So many of today’s new musicians tell me that they have been influenced by him; with a rhythm or a minute way of singing. So many musical producers in both Pakistan and India have told me that when they have recorded the violin or a piano solo, they have thought of him.”

I recall a time from long ago, when Adnan Sami Khan was a young boy playing the piano for children, in PTV’s evening transmission. Throwing his head back, he would close his eyes, and play the instrument flawlessly. Can Azaan also do the same? “The piano has been a big part of my life,” he says. “It’s like an extension of me and if I am jamming, I feel naked without it. But whether I can close my eyes and play it like my father, that you’ll have to see when I go live on stage.”

Azaan hopes that this happens sooner rather than later. After the complete release of his album, he hopes to take it on tour, singing his film songs as well as the album’s songs live. “Hopefully, it won’t be risky to have concerts by then,” he says. “I can’t wait to share these songs live.”

“All the songs are so personal to me. I want to sing them with people who may have also felt something when they heard them.”

He’s so hopeful and so passionate that one can only wish him well. Hard-working with an ability to laugh at himself and bucketloads of talent – it’s always been a winning combination.

A little excerpt from my interview with Azaan Sami Khan