Social media in Ramzan never fails to deliver shock value. And Aamir Liaquat Hussain, particularly, has never disappointed in this regard.

In Pakistan, during this holiest of all months, when Muslims believe that the devil is locked away, Ramzan transmissions come out to play. With them, comes the enterprising host of game shows, religious shows and all-around wisecracker Aamir Liaquat Hussain. He’ll be on TV, live, for unfathomably extensive hours and try his level best to rule social media with his antics.

He’s quite an expert at it – an infamous clip from a game show where he fed the contestants ‘aams’ – mangoes – comes to mind. And this year, he’s topping the charts with two clips: one shows him taking a nasty fall while racing female gold medalist Naseem Hameed and in the other, he’s exuberantly dancing like a ‘naagin’ – a female snake in human form very popular in fantasy Bollywood movies – while guests Aijazz Aslam and Nadia Khan look on.

The sort of video that scars you for life

The lurid snake dance was particularly appalling, providing meme fodder and getting criticized rampantly. In a successive show, Liaquat grinned and declared that he wouldn’t be doing such a dance again. Of course, why would he? Been there, done that. Ramzan had only just started, after all, and he could proceed to other just as ghastly tomfoolery. You can always count on Aamir Bhai ruling trends for the entire month when he’s on air, daily, in celebration of Ramzan.

In fact, when Aamir Liaquat made his half-baked apology, his guest for the night, actor Agha Ali complimented him on how no one is more viral than him on social media. His host benevolently replied that he had no problem with people making memes because he was an ‘awami’ man after all.

Ruling trends and being viral, it seems, is all that seems to matter to a large contingent of local celebrities and channels. High quality content, meaningful dialogue and more than anything else, a general sense of decorum can take a backseat, thank you very much.

This obsession with trends and ratings lies at the root of the veritable trash that tends to throng local TV. Local audiences like to see it and therefore, TV delivers. In Ramzan, moreover, such clips invariably tend to surface. Ramzan evenings attract in huge audiences that turn on their TV’s in their post-Iftar stupors. The competition between channels is breakneck. Lighthearted Ramzan dramas rival ARY Digital’s colossally popular star-studded Jeeto Pakistan. And Aamir Liaquat, a longtime popular figure come Ramzan, surfaces on one channel or the other for longwinded transmissions. This year, the spotlight has been placed on him by Express Entertainment. 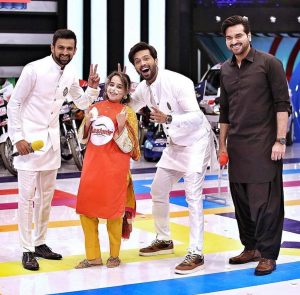 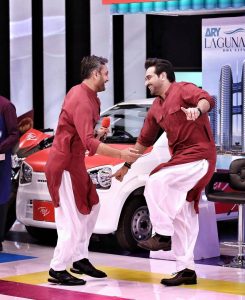 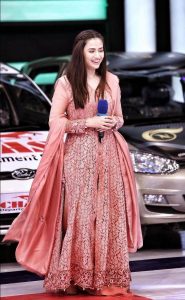 Games and celebrities, Jeeto Pakistan on ARY Digital is a Ramzan mainstay

Following Aamir Liaquat’s ‘Naagin’ demonstration, it’s a surety that more people will be curious about what he’ll do next. They will switch on their TV’s in the long Ramzan evening and tune in on to his show. Express Entertainment and its erroneous host are likely to cheer – mission accomplished!

From religion to ‘entertainment’

A lot of us aren’t cheering though. We’re squirming in disgust, upset at the lows that local entertainment often slumps into. Soon after the controversy went viral, Aamir Bhai came on Twitter, nonchalantly asking his followers if they had any questions for the Ulema who were going to be attending the religious segment of the Ramzan transmission that he hosted before Iftari.

A multitudes of jokes and memes followed in reply. He may have turned his mind towards theological considerations but his dance moves – especially where he slithered on the floor – were still imprinted on his audiences’ minds.

It made one wonder why he was hosting two completely contrasting segments: the serious religious discussions with scholars and the star-studded game show later in the evening? Most other channels have different hosts relegated to different genres. Fahad Mustafa, for instance, is Jeeto Pakistan’s longstanding game show host while Waseem Badami takes over the religious segments on ARY Digital. Reema and Ahsan Khan both host religious shows on Aaj TV and PTV respectively. 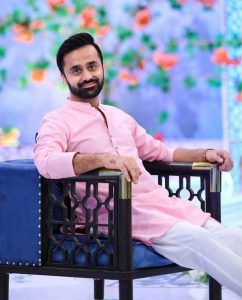 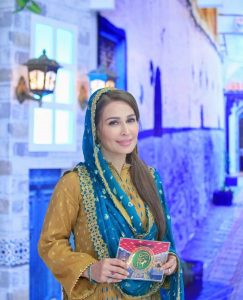 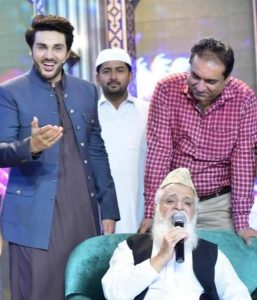 Most channels have separate hosts for their religious content – from this Ramzan’s transmissions, Waseem Badami, Reema Khan and Ahsan Khan on ARY Digital, AAJ Entertainment and PTV respectively

Considering that TV channels profess to turn towards spiritual aspirations in this month – even if it is merely for the sake of ratings – it seemed disrespectful to have a single host dedicated to religious discussions as well as the circus that evidently follow later.

Nadia Khan, the other guest for the night, mulled out loud if it was alright to sing songs in Ramzan to which she was told, “Ramzan is over for today, this is not Ramzan transmission!”

“He (Aamir Liaquat ) wouldn’t want it any other way,” one of the guests at Liaquat’s spate of shows observes. “He’s always thrived on staying up till all hours of Ramzan, hosting one segment and then another. If the channel wanted to bring someone else in, I am guessing that he wouldn’t allow it.”

This guest – who prefers to remain anonymous – continues, “You have to understand that this is his way of gaining mileage. The other extremely popular game show in Ramzan is Jeeto Pakistan which is loaded with glamour. Fahad Mustafa, the show’s host, is a well-loved hero. Aamir Bhai has to counter this in his own way and he does so by making jokes that are often controversial.”

Don’t Liqauat’s guests – a large contingent of celebrities who make appearances at his shows every year – feel anxious that he may completely flip out and be insensitive, all on a live show? They run the risk of looking ridiculous too when they share the stage with him. “That fear is there but we are paid to make these appearances,” one celebrity explained. “This is part of our jobs, our bread and butter. Besides, he is always so high that usually one doesn’t have to do anything at all, just keep laughing and you’re done.” All celebrity guests have to do is laugh along (and pray that they don’t look too ridiculous) … they get paid for doing it too!

‘Ramzan is over, after Iftar’

Of course, Aamir Liaquat’s shows aren’t the only ones that run into controversy. There have been many times when other Ramzan game shows have also been offensive, reveling in body shaming by giving out prizes to the contestant with the most weight, organizing eating contests where food gets grossly wasted or making an error with disparaging comments, made accidentally during the live filming.

But most shows simply rely on games and lighthearted banter for fun. Aamir Liaquat Hussain has a penchant for going a tad further.

A YouTube overview of his recent shows reveals quite a cringe-fest. The same show featuring the infamous Naagin dance had him making lurid dance moves while actor Aijazz Aslam sang a song, clutching at his chest and thumping at it. Nadia Khan, the other guest for the night, mulled out loud if it was alright to sing songs in Ramzan to which she was told, “Ramzan is over for today, this is not Ramzan transmission!”

This, apparently, is the basis on which Aamir Liaquat Hussain feels that he has a free rein to behave however he likes. Such content is a disgrace at any time of the year; in Ramzan it is even more so. At least the farce of spirituality could be maintained even if the channel’s primary goal is to score ratings.

The evenings may be longer, the audience may be more inclined to watch TV following a long fast, but some checks and balances need to be placed. Is this what we want to show younger audiences? Do we really want to build a nation that thrives on crude humor? Is this the trending content from Pakistan that we would want international audiences to randomly stumble upon while surfing YouTube or Instagram?

No, we don’t. But sadly, the critique on social media is likely to simmer down soon, reduced to short- lived forgettable commentaries. The Pakistan Electronic Media Regulation Authority (PEMRA), lately so eager to ban dramas without legitimate reason, hasn’t had much to say so far. Back in 2016, Aamir Liaquat’s show for GEO Entertainment ‘Inam Ghar’, had been banned for three days by PEMRA on the basis of yet another offensive video, in which he had enacted a girl committing suicide. Perhaps, snake dances are considered quite alright in comparison.

Veteran actor Jamal Shah Tweeted that Aamir Liaquat Hussain, as a member of the National Assembly, was also demeaning Prime Minister Imran Khan’s government with his behavior. Again, this has been to no avail.

Playwright Anwar Maqsood had once despondently commented to me that the TV of yore sought to elevate minds and educate people but today’s television channels merely aimed towards creating content that people wanted to see. It could be downright crude. It could deteriorate viewership standards. It didn’t matter. As long it hauled in ratings and proceeded to draw in sponsors.

In the mad rush for ratings and trending, it is likely that we’ll be seeing much more of the same.