Even the most glamorous of lives may have deep dark secrets hidden away just beneath the surface. One such secret which haunts many Pakistani women has its roots in domestic violence. According to a report by the Aurat Foundation, 2,297 cases of domestic violence were reported in Pakistan during the last year. These are, of course, just the reported cases while thousands of others go unreported. Violence in the home is not restricted to a certain economic bracket, tarnishing lives of women who vary from homemakers to professionals who may even be famous celebrities.

One such example to recently come to light is of renowned singer – and sporadic actress – Komal Rizvi who has opened up about being physically abused by her husband. These revelations were made by her during a Ramzan transmission hosted by Nida Yasir.

Talking about her former husband, she recounted that there had been times when she had gone to bed empty-stomached because she didn’t have any money. 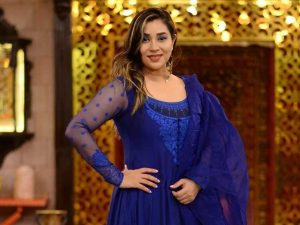 “It doesn’t matter if you’re independent, strong or even educated when you encounter a mentally ill person who you are destined to spend rest of your life with. I was married for six years and there were many times when I was completely helpless. I was physically abused constantly.”

Komal further added that she used to give tuition and sell food at stores in Oman to make ends meet. Replying to Nida Yasir’s question about why her husband used to physically assault her, she said that he was mentally ill and went for sessions with a psychiatrist for six months.

Talking about how supportive her parents have been she said, “The first time he hit me with a soda bottle and pushed me, I developed a bruise around my eye. When my parents noticed it they immediately wanted me to come back home.”

Moreover, she added that she was afraid that her husband might kill her.

“My father had to fly down to Oman, pack my bag and I remember rushing to the airport with a single bag, shivering with fear that I might get killed.”