If you’re on Twitter, you know who Pakistan’s favorite bahu is this weekend. It’s model and actor Sadaf Kanwal, aka Sadaf Sabzwari, who, in a recent interview with ARY Digital, talked at length about her housewifely duties. 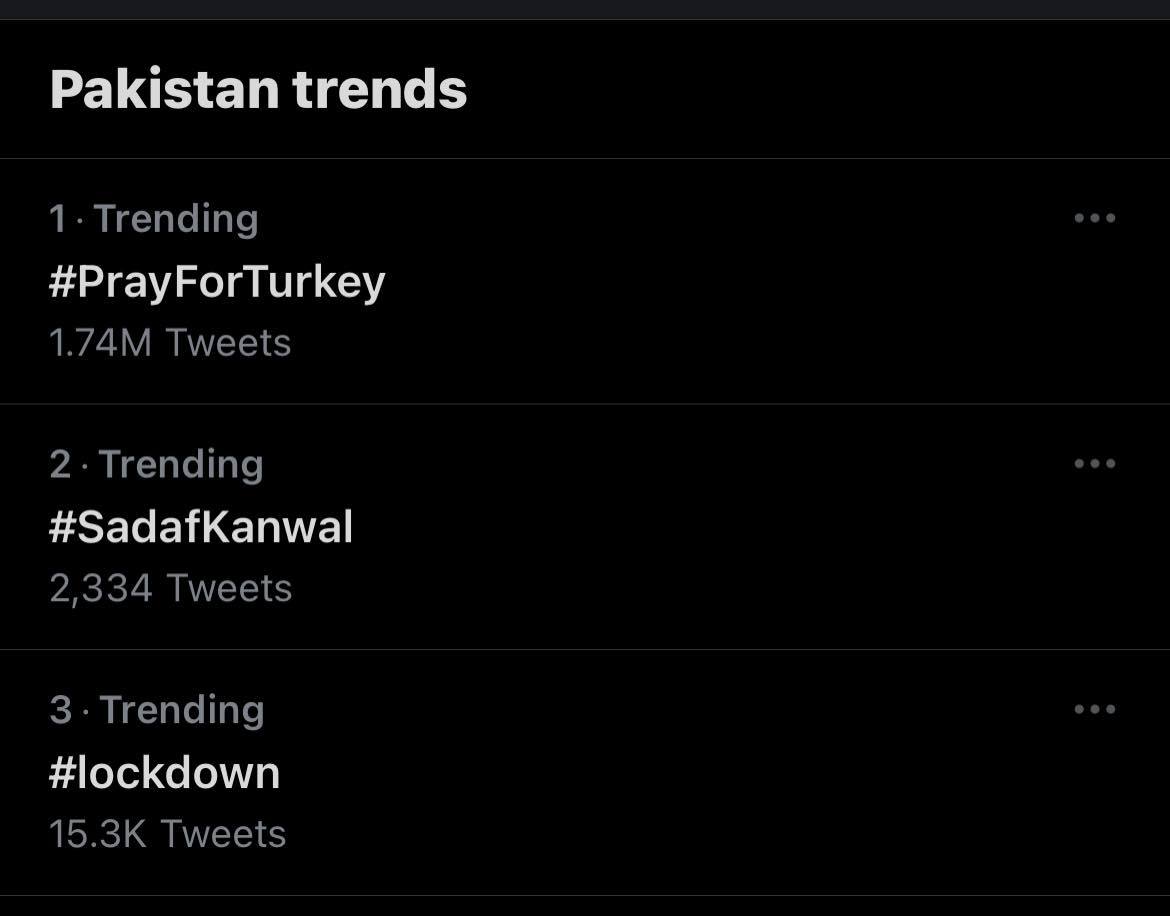 There have been many times before when Sadaf has trended on Twitter. She’s been one of Pakistan’s top-most models for a long time, the face of a slew of high-end brands and the recipient of multiple ‘Best Model’ awards.

There have been times when she’s trended for risqué modelling shoots. Pakistan, of course, didn’t approve. Her slinky item number in Filmwala Productions’ hit movie ‘Na Maloom Afraad 2’ also got noticed big time. Pakistan may have ogled at it repetitively but of course, they didn’t approve. Then, Sadaf tied the knot with actor Shahroz Sabzwari last year and it lead to multiple Twitter debates for days. Shahroz had earlier been married to actress Syra Yousuf and has a daughter with her. Following his divorce, he married Sadaf. The images of their very private Covid wedding went viral and Pakistani social media decided to voice their many, many opinions. They bashed, they rehashed and they took sides as if they were Sadaf, Shahroz and Syra’s intimate friends and had personally seen both the divorce and wedding take place.

Now, Sadaf’s trending again and most of the country is in love with her. “I know where Sherry’s (her nickname for Shahroz) things are and what does he want to eat and when…” said Sadaf in the interview. “I should know all this because I am his wife and I am a woman. Sherry doesn’t need to know so much about me but I do need to know more. I believe this because I have seen this as I grew up. This word ‘feminism’ has come up. These people are liberals and they say things … in my thinking, it is important that I take care of the man and give him respect…”

Pakistan’s small smattering of feminists sighed in dismay. The rest of the country nodded in approval. The comment ‘der aayee durust aayee’ was stated and also felt wholeheartedly. This implied that Sadaf had mended her so-called evil ways and had transformed into the ideal Pakistani woman, who valued her husband above everything else.

When i saw sadaf kanwal on trending, i though to myself, Ab kya kardiyaa? But this time its trending for good reasons. Dair aaye, durust agae lekin. #SadafKanwal

Hhahah.. finally someone has destroyed the narrative of desi feminists within few seconds hats off #SadafKanwal https://t.co/Hx70isec3O

For the very first time I like this girl and her statement, the way she stand and her statement is just perfect as it can be. Welldone #Sadafkanwal for such a great and meaningful statement against such cheap liberals. " bilkul aurat ka farz hai apny shohar ka khayal rkhna"🙏🔥👍 pic.twitter.com/LBF7mx3eh8

New definitions were sought out for what ‘feminism’ actually meant rather than what Pakistan’s much-hated feminists thought it did. Apparently, feminism means taking care of your husband. What, you didn’t know that?

“Women are not oppressed at all, in fact, they are very strong & Feminism is caring about husband & respecting him" #SadafKanwal thinks feminism is nothing more than a result of ‘liberals’ taking over. She is Right coz Reality can't be deny, more power to U brave lady 💯 pic.twitter.com/b5Wg3FgNEg

A few, however, did try to sort out the confusion regarding feminism. Model and actress Sabeeka Imam, for one.

When you don't know the definition of feminism… start rambling about ironing your husband's clothes. EPIC! 👏🏼

Sadaf, of course, is entitled to live her life the way she wants to. However, as a public figure, on a public platform, she needs to be more careful about the narrative that she is supporting. She must have known that the notions that she was putting forward were going to get the Pakistani masses on her side and possibly, place her on a gilded pedestal reserved for those who are considered to be ‘morally correct’.

Did she also not know that she would be strengthening and highlighting the deeply problematic misogyny and double standards within Pakistan?

When Sadaf’s sole claim to fame was that of an independent, successful fashion model, she was criticized constantly. In fact, even in the wake of this latest interview, there were some that searched out images of her showing skin and floated them out on social media, cautioning Sadaf’s new fan following to not take her wifely aspirations on face value.

So she was ‘bad then and ‘good’ now? Who are we to decide this?

Can you imagine this woman is telling Pakistani women's about culture and morality and how they should behave to their husbands according to Islam. But I think she forgot islam while doing mujra.
And this is new ammi of all misogynist. #SadafKanwal pic.twitter.com/voW9I9A7cF

Our take on Islam

The word ‘Islam’ was constantly pitched, which is sad. Commentators praised that she was ‘Islamic’ now, considering it an accepted reality that it was a woman’s religious duty to serve her husband while sidelining her own needs. Muslims around the world may interpret their religion in a different way but Pakistani Twitter assumed that she was the perfect Muslim wife simply because of the statements that she made.

Twitter also assumed that she wasn’t ‘Islamic’ in the past, prior to her marriage. Isn’t God supposed to make that judgement rather than desi social media?

And then there were those that cocked sardonic eyebrows and reminded Sadaf that she was Shahroz’s second wife, accusing her of being a ‘husband hijacker’, ‘stealing’ Syra Yousuf’s husband and snatching a father away from his daughter.

The vitriol was mindboggling. At one end of the spectrum, the absolute sense of righteousness felt by Sadaf’s supporters was eye-opening. At the other end,  the people who chose to criticize by searching out past images that they felt were ‘evil’ were just as tone deaf.

Just as unnerving, if not more, was the fact that Sadaf and Shahroz chose to support a mindset which considered  feminism to be an extremist, antireligious concept. Even if they had differences of opinions regarding certain feminist concepts but how could Sadaf come on national TV and show disregard for a movement that is trying to carve an identity for women in Pakistan? How could she, especially while femicide wreaks havoc within the country, not care about the slogans that agitate against domestic violence, mental and verbal abuse and a stolid sense of male superiority?

When she talked about prioritizing her husband’s needs, adding that she did not agree with what ‘liberals’ in Pakistan thought, men all over the country puffed up their chests and beat them victoriously. Give them a good woman whose sole purpose in life was to serve them rather than a ‘liberal’ who may also have individual needs that she considered to be just as important. Why did Sadaf decide to create such strict definitions of what was ‘good’ and ‘bad’?

In his wife’s defence, husband Shahroz Sabzwari chose to post an Instastory outlining what he thought ‘liberalism’ meant in Pakistan, thanking God that they were not from amongst them. The misrepresentations of what is culturally correct in Pakistan and the all-out bashing – by the ‘liberals’ and the ‘not so liberal’, the ‘feminists’ and the ‘not so feminist’ – is so rampant that it is distressing. It is also a sad indication of the lack of respect and tolerance directed towards women in Pakistan except when they abide by what society dictates as ‘right’.

On a lighter note, it reminds one of Momin Saqib’s golden words, once spoken into a mike and henceforth, becoming eternal.

Sadaf Kanwal talking about feminism and Aurat march, and everyone is like…

In such a sad state of affairs, it’s a relief that we have memes that turn the debacle into a joke – especially the memes ab0ut ‘Sherry Baby’.

The puzzle which i think no one is able to solve …..#SadafKanwal
😂😂🤔🤔🤔 pic.twitter.com/Bl6p2FwMHJ Iron clothes, but make it fashion!

Some people also took the time off to wonder about Shahroz’s nickname.

Beyond the quips and the memes, though, it is hardly a laughing matter when stars disregard feminism altogether and a mass mentality considers it righteous for a woman to be obsessed with her husband, sidelining her own needs.