There are obviously going to be some fraudulent activities forming the focal point of Fraud, IDreamsEntertainment’s producer Abdullah Seja’s latest drama which has just begun airing on ARY Digital. And at this initial point, it looks like Ahsan Khan is going to be the bad guy in the story.

Towards the end of the first episode, his easily recognizable green-grey eyes peer calculatingly from above a laptop screen. He’s evidently on to a scheme as he fills out the form at a matchmaking online site. The trailers preceding the drama have implied as much; showing a newly married Saba Qamar desperately scanning a train station in search of her husband. Another trailer shows Ahsan driving an Audi and making plans for a trip to Dubai and then, stepping out into a clustered narrow alley, changing into a dhoti and speaking in Punjabi. This guy isn’t what he appears to be and he’s about to get down to some serious wheeling dealing in the later episodes.

The first episode, though, simply sets the premise for the story. The drama’s two leading men, Mikaal Zulfiqar and Ahsan Khan haven’t yet entered the picture, except for Ahsan’s small glimpse right at the end. For now, the story revolves around Maha, aka Saba Qamar’s home, where her father is intent on marrying his daughters into rich households.

“I have raised them like princesses and I want them to have all the luxuries in the world,” Maha’s father, played by Mahmood Aslam, reiterates throughout the episode, much to the dismay of his wife and younger daughter who want to see the eldest in the house happily married.

Enter Nael, played by the very talented Adnan Samad Khan, Maha’s phuppo ka beta who is desperately in love with her. Maha does have a soft spot for him but being the good, obedient daughter, tells him that she will marry whoever her father chooses for her. Nael gets a job, sends his mother with his proposal and Maha’s father, in a bit-too-long emotional put-down, refuses.

Nael and his mother, despite being good people and loving Maha, couldn’t possibly fulfill the affluent aspirations he has for his daughter. Nael leaves teary-eyed. The obsession with wealth is very obvious – Maha’s ambitious father is going to end up paying for it when he gets smitten by a ‘fraud’ and marries his daughter off to him. Standing out in the first episode is Adnan Samad Khan, professing his love to his cousin and later, dissolving in tears. Saba Qamar catches the eye as the good daughter but it is only in later episodes, when her life turns upside down, that we’ll be able to see her quintessentially strong screen presence. 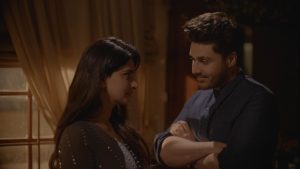 The drama’s starting track and teasers have indicated that Mikaal Zulfiqar is a young father whose wife has walked out on him. It is not clear how he’s going to fit into the story’s framework.

This is good – there are some parts to Fraud’s story that can be predicted and others than remain a mystery. It also promises to be a drama that treads different ground. Maha’s mother does make the usual remarks about her daughter getting older and how she needs to get married but it is likely that the story is swiftly going to move beyond these traditional woes and focus on our green-eyed conman and the people he misuses.

An engaging first episode that moves at a smooth pace and establishes the nuances to some of the characters, making you want to tune in next week. I am hoping for an action-packed sequence of events, plenty of twists and turns and not too many long, long speeches!