Three days ago, on the first Friday of this year’s Ramzan, more than 75 fans of Atif Aslam gathered together virtually for a ‘Khatam-e-Durood Sharif. These ‘Aadeez’, as they like to call themselves, had resolved to recite the ‘Durood Ibrahimi’ – a recitation especially meant to send blessings to the Holy Prophet (p.b.u.h.) – 1000 times each. The Khatam was primarily organized by fans based in Sialkot but many others joined in, from within Pakistan as well as India and Bangladesh. They had been inspired by the ‘Salam-e-Ajizana’ that had released just a night ago, recited by Atif Aslam, along with Ali Pervez Mehdi, Nouman Javed, Ahsan Pervaiz Mehdi and Kumail Jaffery.

This is just one indication of the resounding success of the naat. As I write this, ‘Mustafa Jaan e Rahmat Naat e Rasool e Maqbool’ has hauled in more than 3.2 Million views on YouTube in a matter of three days. The kalaam, written by Ahmed Raza Khan Barelvi, is a veritable part of Muslim spirituality in the subcontinent, recited reverentially at Quran khatams, the tune and its chorus so familiar that for many, it is an inherent part of their devotion towards the Prophet.

As Atif Aslam sums it up while talking to me, “It is salaam sent to the Holy Prophet, a naat recited in his praise. The heart gravitates towards it.”

And with the heart turned towards spirituality, on the first Friday in the holiest Muslim month, the YouTube hits were bound to follow. Herein lies the power of a devotional recitation, moreover by the country’s biggest rockstar. Atif Aslam and his entourage stood in crisp, plain kurtas, against a simple background and that infamous baritone had a reverential, emotional timbre. In recent times, Atif’s most memorable, most popular work has been theological, the ingenious rendition of Tajdaar-e-Haram, an Azaan echoing out hypnotically when fear due to the coronavirus was at its height, a devout heartrending Wohi Khuda Hai and now, an iconic Naat.

As he turned his head upwards, his hands raised to the sky, eyes closed, you could almost imagine a halo forming over Atif’s head. He does not have to say it out loud – and he continues to dabble with other genres throughout the year – but the power of his successive religious recitations seem to be indicative of the slow inner metamorphosis within Atif Aslam, his personal transformations, the way he somehow keeps getting drawn towards the spiritual side. Of course, he’ll also work on a disco-esque number in Velo Soundstation and improvise with an offbeat romantic track, ‘Raat’. It is, however, interesting to note that unlike many of his peers with international audiences, Atif Aslam wholeheartedly embraces his religious inclinations, how he isn’t hesitant about releasing multiple strongly Islamic tracks even though his diverse fanbase extends beyond just the Muslim community. It seems that he just works on whatever calls to his heart and more and more frequently, spirituality is calling out at Atif, resulting in a series of tracks that flit right to the top of the impressive list of his most successful work.

It is interesting to note that unlike many of his peers with international audiences, Atif Aslam wholeheartedly embraces his religious inclinations, how he isn’t hesitant about releasing multiple strongly Islamic tracks even though his diverse fanbase extends beyond just the Muslim community. It seems that he just works on whatever calls to his heart and more and more frequently, spirituality is calling out at Atif, resulting in a series of tracks that flit right to the top of the impressive list of his most successful work.

“I would never want to restrict the work that I do into a particular genre,” muses Atif. “I like to think that I invent my own genres, creating tracks that inspire me at the time. I do feel a preference towards spiritual kalam. I feel more connected to them and I am driven by the motive behind them, that the recitation manages to reach as many people as possible.”

He continues, “Right now, a lot of media houses are reaching out to me, asking me if they can air ‘Mustafa Jaan a Rahmat’ on their channels. I am in two minds. On one hand, I don’t want a commercial logo to be slammed on the TV screen and give them the chance to earn from a kalaam that we have recited with so much love. On the other hand, I just want it to reach as many people as possible.” 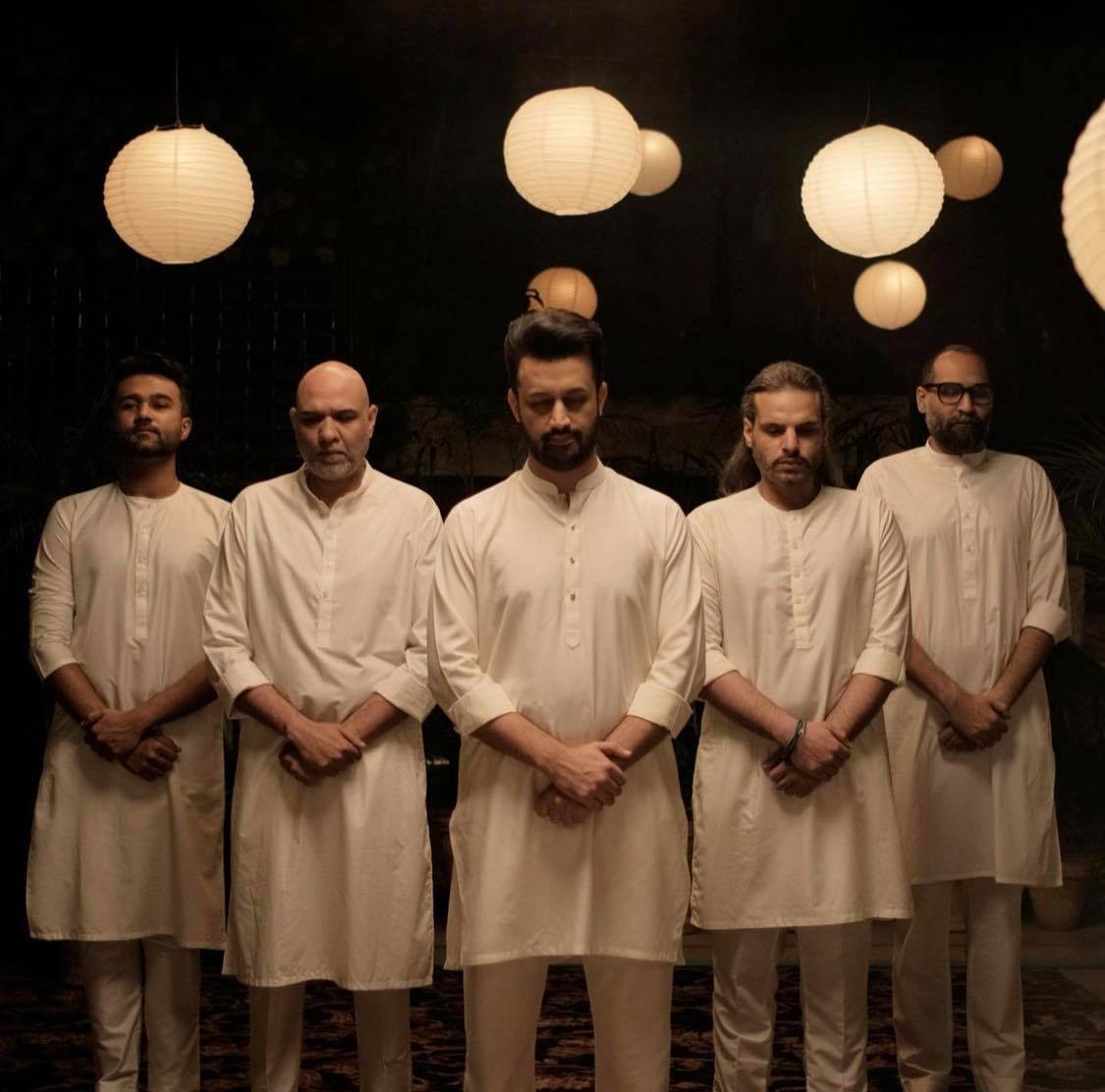 His religious recitations seem to be becoming regulars in Ramzan. Does he plan to work on one such release every year during the holy month? “One must try to do so,” says Atif. “Ramzan is an important month where we set aside all worldly notions and focus solely on prayer, asking for forgiveness, hoping for salvation. This year, though, I had no proper plan. On my own, without a sponsor on board, I have to look into so many details regarding how to release it, film it. But then, Ahsan Pervaiz Mehdi told me that he was planning a recitation for his YouTube platform Bossmen. I wanted to come on board.”

“I knew that I would love to do it,” emphasizes Atif. “What could be better than to recite a kalaam that inspires other people to do the same with you, inspires fans to plan out khatams? There could be no better track than one recited in the Prophet’s praise.”

But what also makes the track special is also the way in which it is recited – with love, pure allegiance, commitment and in a voice that is extremely well-loved. This naat, like the religious tracks before it, marks the changing routes in Atif Aslam’s journey. From rockstar to Bollywood’s hit playback singer to a reciter of iconic spiritual poetry, his evolution moves proportionately with the evolution of his audience.

Devotional spirituality, after all, is at the root of the Muslim community in the Indo-Pak region. And while he may not have planned it out, Atif Aslam’s reverential, hypnotic rendition of kalaam that was written centuries ago was bound to touch hearts. His fanbase runs extremely strong but, perhaps, driven by a Divine power, or simply because Atif himself feels more inclined towards it, the views and rave reviews skyrocket when he takes a turn towards spirituality.