“You can look upon Bilal and myself as two passengers on a journey together,” says Faisal Kapadia of himself and Bilal Maqsood, the duo infamous as the two front men who have defined the band Strings for the past 33 years. “Both may board one bus and then another, following the same route for a long time but eventually returning to our own individual homes. Our paths have been the same for a long time but our homes are different.” Just two passengers on the same journey … for 33 years

This is Faisal’s way of elaborating on why he and Bilal have decided to end Strings. The announcement of the band breaking up came as a shock to music aficionados all over Pakistan and beyond. Strings’ 33 years long journey has been replete with benchmarks, outstanding hits and songs that so many music lovers have grown up listening to. From the melodious ‘Sar Kiye Yeh Pahar’ which skyrocketed the band to fame in its initial years to the hugely popular live concerts that were all the rage just before the coronavirus pandemic, there are so many memories associated with Strings. They are Pakistan’s own, the musicians that have grown up with us, creating songs that we have sung on repeat. A curtain call for the band signifies not just the end of an era for Faisal and Bilal but also for their huge masses of fans.

The announcement that shook music aficionados around the world

The announcement of disbanding, floated out on Bilal, Faisal and String’s official social media accounts, has led to a flood of commentaries. Strings was trending on number one on Twitter for a long time and they continue to be discussed.

“We feel blessed that people are giving us so much love. But it was time,” says Faisal.

How was it time though, I insist. Just a year ago, I had interviewed Faisal and he had talked at length about the Strings’ concerts that had gotten postponed due to the coronavirus. One had looked forward to these erstwhile concerts finally taking place once the pandemic had finally subsided. How could it be time when people were still lining up to buy tickets for their concerts and their songs were such hits?

“Bilal and I often discussed how the band would end and it was our mutual decision that we would call it off when we were still at a high,” says Faisal. “Everything has to end one day, may it be life or a partnership. It’s difficult to make an exit but we didn’t want to continue on for some more years, lingering on until we weren’t as popular and then fading away.”

Given your continued popularity for the past 33 years, I can’t see you fading away, I point out.

Faisal counters, “Times have changed. The momentum of life has changed. Everything is so much more fast-paced now. We knew that this was the time when it would be toughest to leave. We’ve released 30 albums and been in the business for 33 years. I think our recent concerts have been our best live performances in all these many years.”

“We’ve done this before too,” points out Faisal. “Back in 1992, when ‘Sar Kiye Yeh Pahar’ was a huge hit, we decided to step back. It was for different reasons then. We had to complete our studies, get married and start our families. Then, after the 10th season of Coke Studio, we decided to end our tenure as the show’s producers. We had helmed four hit seasons and we could have stretched on at CS and made more money, but we knew that we had to leave at a point when we were at our strongest.” 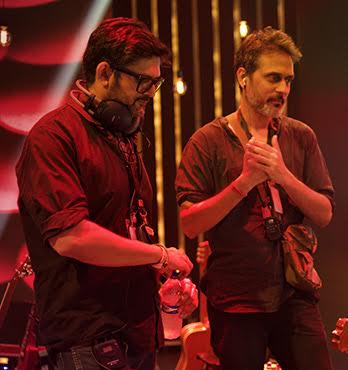 Bilal Maqsood and Faisal Kapadia, back when they were masterminding the red and black neon Coke Studio stage

As saddening as it may be for Strings’ many, many fans, Faisal’s words do make sense. Nevertheless, Strings was on a lucrative high at this point in time. Didn’t they have second thoughts, moving away from a partnership that they were earning from so well? “Anyone who knows Bilal and me know that we are both very simple. We don’t have a fondness for living luxurious lives. Bilal’s sons are graduating from university and mine will also, next year. Bilal just turned 50 and I am about to do so as well. I think we’ll manage,” he laughs. “Also, we would never compromise Strings just so we could earn a bit more. The band stands for so much more than just our individual needs.”

Even before the band had announced breaking up, one had observed Bilal and Faisal beginning to chalk their separate paths with Bilal taking on the mantle of executive producer and co-director of the music show Velo Sound Station. Did the show trigger off the decision to end the band? “No, it was something that we had been discussing for a while,” says Faisal.

Now that they will be moving their separate ways, what are the two of them planning to do? “I am sure Bilal will be pursuing his own plans but right now, I don’t have any plans at all! To give 33 years of your life to something is a long time. Strings has been our identity and it literally feels like we’ve lost the roof above our heads. Now I’ll see what I do next.”

Post-breakup, Strings are still together, reminiscing; Bilal Maqsood and  Faisal Kapadia with their families

“The great thing is that over these many years, we have seen bands breaking up in ugly ways,” says Faisal, “but for Strings, this was a mutual decision, made for reasons that we both believe in.”

True. But it doesn’t mean that we won’t miss Faisal’s deep familiar baritone, Bilal playing his guitar on stage with his back slightly arched, the melodies, the sound that is so distinctively Strings. ‘Thank you for the memories,” so many of their fans declared on social media. And may they make some more memories, really soon, with comeback concerts!

One of my favourite Strings’ songs, sung so beautifully, held together by such poignant patriotic lyrics!