When Engin Altan Duzyatan, the lead actor of the hit Turkish series Dirilis: Ertugrul, visited Pakistan in December last year, no one knew that his visit would be followed by the strangest headlines. Apparently, his host, Kashif Zameer, the MD of a business group called the Chaudhary Group of Industries had not paid him the agreed amount for his visit. 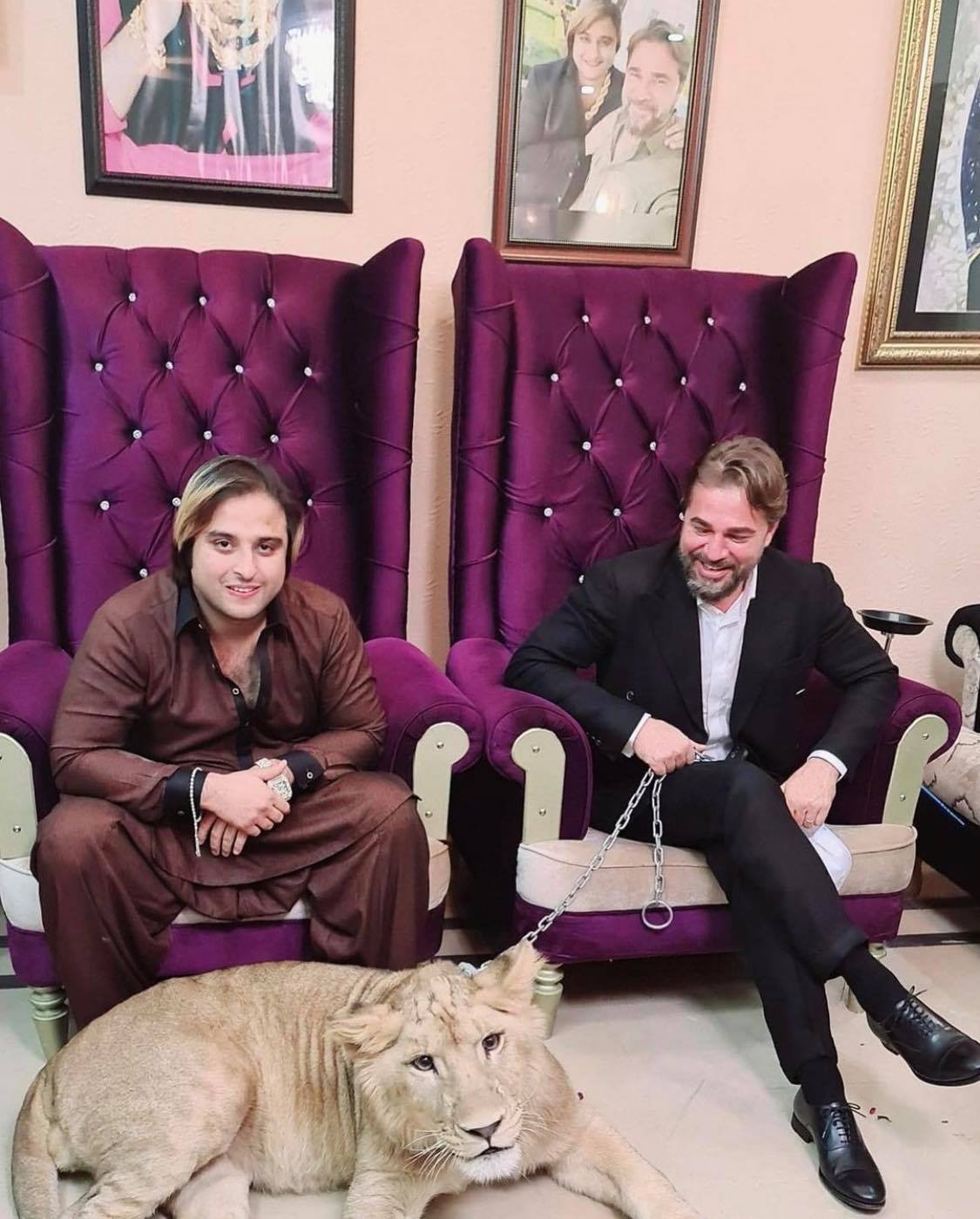 There was plenty of conjecture but Engin himself had remained silent. Kashif Zameer came online several times, professing how media was deliberately trying to smear his reputation. However, an official statement that floated out on to the Internet yesterday, appeared to be an official statement from the actor himself, stating that he was opting out from his role as brand ambassador of Chaudhary Group of Industries because ‘conditions of the agreement’ with Kashif Zameer had not been fulfilled. 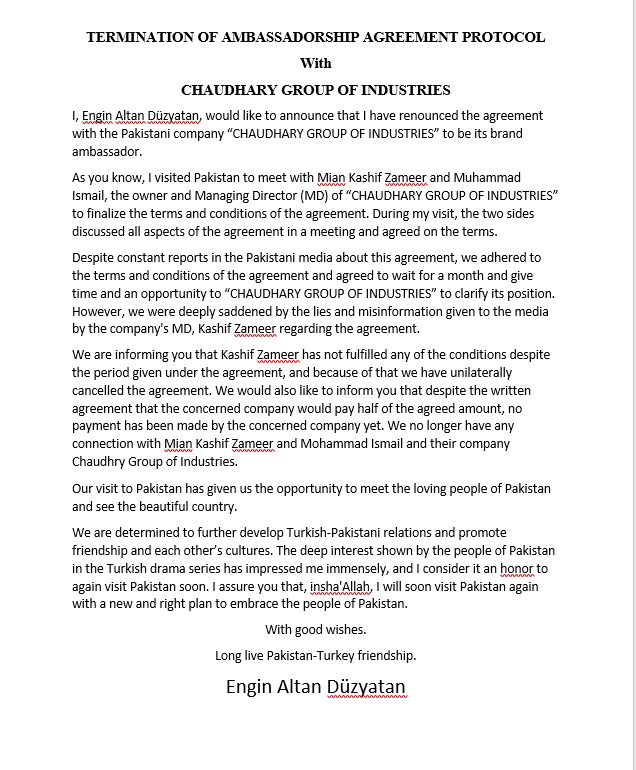 Was this truly a statement from Engin Altan Duzyatan? Bilal Khan Pasha, the Consul General of Pakistan-Turkey, confirms, saying, “On his return from Pakistan after meeting Kashif Zameer, Engin Alltan Duzyatan’s team reached out to us to discuss the payment issues that they were facing. They decided to wait and see if payment would come through before filing an official complaint.” But how much of Engin Altan Duzyatan’s issues with Kashif Zameer are based on hearsay and what actually did happen? In an interview with a YouTube channel named ‘YareMan Turkey’, Dr Furqan Hameed, Secretary General at Pakistan Turkish Cultural Association and a journalist who apparently has been assisting Engin’s team in their Pakistani endeavors, elaborated that the actor had not been paid ‘a single cent’ of what he had been promised according to the contract with Kashif Zameer.

Dr Furqan etched out the fiasco in detail. Here are some excerpts: “Kashif Zameer visited Istanbul and invited Engin to Pakistan, proposing a brand ambassadorship of the amount that the actor tends to charge for public associations … Engin’s visit to Pakistan was not pre-announced to the media because it was a business trip. It was only once the team landed at Lahore airport that the news was put forward. The team stayed at the Pearl Continental Hotel Lahore and during the course of their trip, had a press conference, signed a business contract with Kashif Zameer, took a tour of the city and met the Chief Minister of Punjab, Usman Buzdar. The Army Chief had also invited Engin and sent a helicopter to take him to Rawalpindi but due to bad weather conditions the meeting could not take place.” 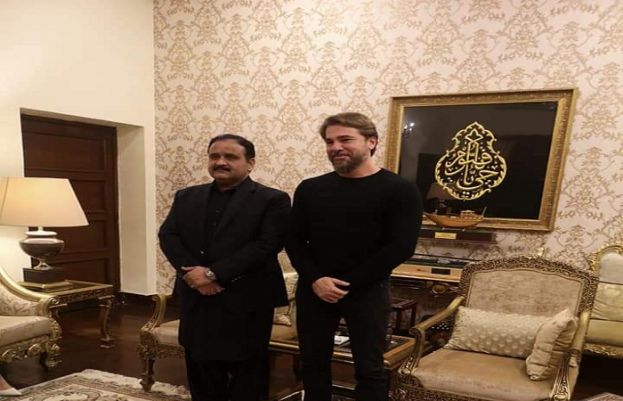 Engin’s Lahore trip at a glance: dinner with Kashif Zameer, a trip to the Badshahi Mosque and a meeting with CM Punjab

“A cheque was presented to Engin by Kashif Zameer from the Toba Tek Singh branch of Bank Alfalah. Engin was told that he could cash the cheque on reaching Turkey. However, when the cheque was taken to the bank in Turkey, Engin’s team were told that it was not valid because there was no cash in the account from which it had been signed off. “

Evidently, this was the time when Engin’s team decided to contact the Pakistani consulate in Turkey. Social media was afloat with rumors but Engin himself did not make a statement. Why? “Kashif Zameer kept professing that the payment had been made so Engin’s team decided to wait. Ultimately, now, he realized that the money was not going to come through.”

The statement issued by the actor clearly indicated that he was cutting off terms with Kashif Zameer but he also ended it on a positive note, saying that he hoped to visit Pakistan again, even declaring, ‘Long live Pakistan-Turkey friendship’.

It’s sad that an actor of Engin Altan Duzyatan’s stature, hero-worshipped in Pakistan ever since Ertugrul stormed on to PTV last year, ended up falling victim to such a fiasco. The story, however, also makes one incredulous. In today’s age, where payments are made within seconds via online transfers and legitimacy of contracts can be checked out through simple Google searches, how could a major star agree to make a trip, pose for unlimited selfies, sit with a chained lion and pet it, without having received a single cent promised in the agreement?

Other Turkish actors – Esra Bilgic who plays Halime Sultan particularly – have been part of multiple Pakistani collaborations. All of Esra’s ad campaigns have so far been shot in Turkey, the Pakistani teams flying off there to shoot with the actress.

Rumor has it that Engin Altan Duzyatan is very expensive to work with which is why he is yet to be seen in a Pakistani ad. And unfortunately, the one time that he did come to our land, he ended up not getting paid at all!

It’s heartening, though, that the actor hopes to come to Pakistan again soon. He is extremely well-loved and any visit from him is going to be very exciting. Hopefully, Engin’s next trip won’t be followed by so much controversy and he’ll see a better side to Pakistan.