‘Queen of the Jungle – Hear me Roar,’ declared a colorful throne, taking center stage at the brand new Khaadi store that has opened this weekend in Karachi’s Dolmen City Mall.

Both literally and figuratively, it did seem to me that this brand, which over the span of 23 odd years, had become an intrinsic part of the Pakistani high-street, was letting out an emphatic roar – but one that resounded to a different tune. This was Khaadi, reinvented, winding through new colors, patterns, addressing the loyal clientele who frequented the store while also turning a focused away towards a younger demographic. ‘Wild About You,’ declared the theme, giving an enthusiastic nod to the customers that have helped the brand grow, onwards and upwards. 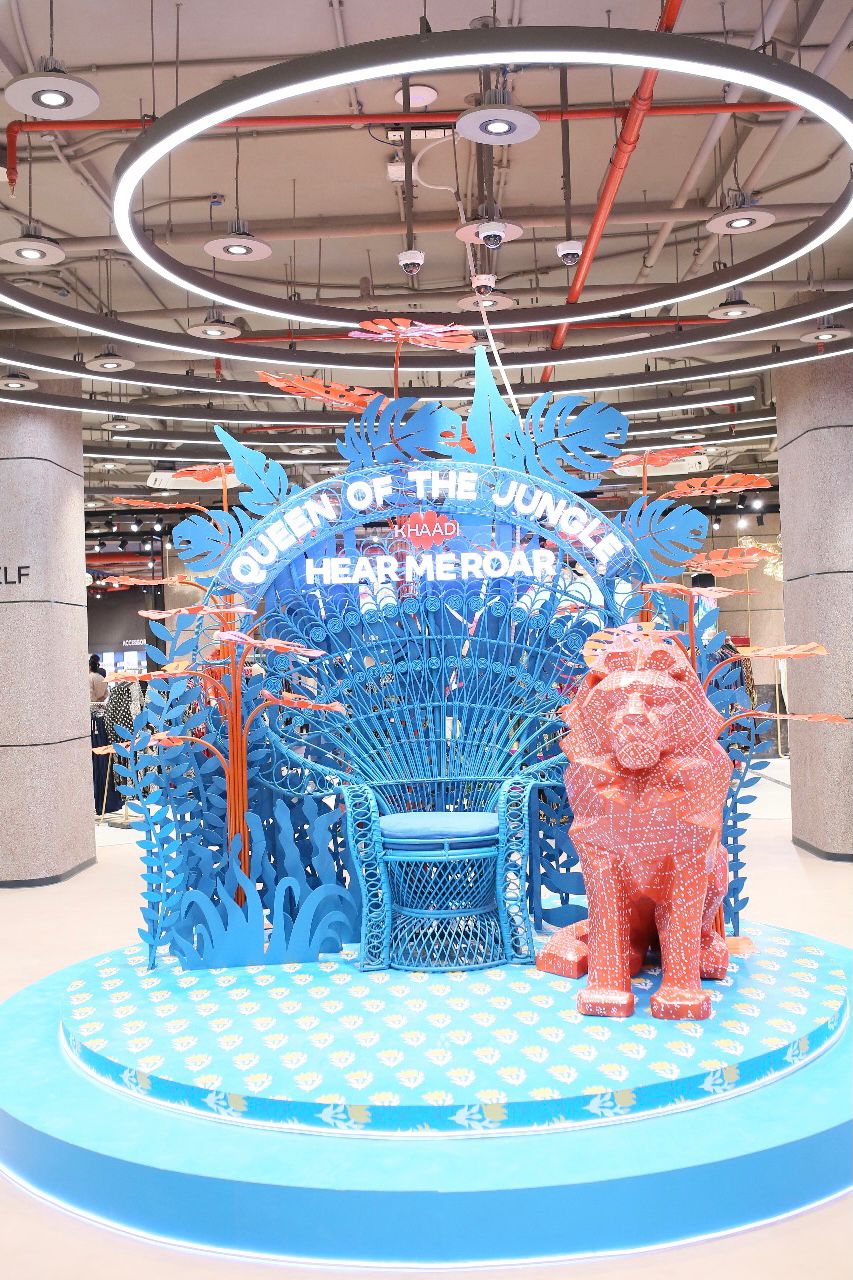 On the 13th of December, 1998, Khaadi had been incepted by Shamoon Sultan, a young graduate from the Indus Valley School of Art and Architecture, and had become a high-street heavyweight frequented by the young women of the time. Those women had now grown older and comprised a large chunk of Khaadi’s clientele. Now, on 4th December 2021, the brand – reborn, retaining the old ethos while delving towards the new – was ready to ensnare the next batch of 20 year olds. There were Instagrammable walls with catchy captions, little nooks with colorful installations and one product line ingeniously running into another one. I was told that the store’s layout was prepared by a group of foreign consultants and drifting through the space, the difference showed. This wasn’t just a colossal retail store filled with stock, choc-a-bloc. There was sense in the way the different product ranges were panned out. Khaadi ready-to-wear lead into the hand-woven Chapter 2 by Khaadi line, leading onwards to accessories, fragrances, formals and casuals, unstitched and stitched and – a welcome new addition – the ‘PIT’ (Put It Together) section lined with a variety of add-ons that could amp up an unstitched outfit, such as laces, trimmings and tassels. Another corner was dedicated to wrappings, colorful papers, envelopes and gift cards emblazoned with some very familiar Khaadi motifs and patterns. Buy it and get it gift-wrapped – a little addition that can go a long way in enhancing the customer experience. The smell of freshly brewed coffee wafted in from a café set in the middle of the store.

“The old Khaadi is back,” confirmed a euphoric Shamoon Sultan. “When we started out, our primary focus had been on creativity. Over time, we invested time and effort into expanding, physically as well as in terms of product ranges and in consolidating our market position. We have now come full-circle and are once again, dabbling into creative new directions. I have no doubts when I say that this weekend, Saturday December 4th 2021, the day we opened our new store, has been the best day for Khaadi in the past 23 years.” The store opened up to the brand’s inner circle and media for a private viewing a day earlier. The sales counter remained closed but the guests could roam around the reinvented new ‘Khaadi Experience Hub’. The feedback had been wholeheartedly positive. However, to Shamoon, the comments from customers at the opening, a day later were the real litmus test.

“A lot of what I have learnt about running a business has been by interacting with customers,” says Shamoon. “When I first opened Khaadi, I would spend two hours every day sitting behind the sales counter, getting customers’ feedback. Yesterday, on the day we opened the new store, I spent the entire day sitting at the sales counter talking to customers. They were so happy. Some told me that this store and all that it offered was what they had been missing at Khaadi.”

Looking beyond the kaleidoscopic new wrapping of the just-launched flagship store, the product ranges have been tweaked. There is casual lounge-wear – hoodies, track-pants and shirts – for the young customer. Shoulder to shoulder with the usual, mass-centric printed kurtas with embroidery are simpler options; kurta and pant sets in solid blocks of color, classic tunics in black and white, fully embroidered flared shirts and cotton jackets that can easily be utilized as evening-wear and are priced very economically.

“The transformation had to be more than just a change in the store interior,” says Shamoon. “The inventory had to change too. The Khaadi aesthetic is evolving and you will see it getting even better with every seasonal collection.” “I had thought of building this new store back in 2018. We had originally wanted to launch it in mid-2020. I remember how, two weeks before Covid struck, we had finalized our plans. We had to postpone and for the next four, five months, we rethought all that we needed to change, from the logo to the shop’s aesthetic to how the Khaadi image needed to be packaged. We had to retain our strengths while identifying our weaknesses and fixing them.”

The logo change, preceding the launch of the flagship store by a few weeks, was a glimpse into the brand’s changing ethos. The earlier Khaadi logo was a well-loved one, representing the knuckles of the hand-weaver bent over the handloom, representative the hand-woven fabric that had once been Khaadi’s signature. The newly launched logo, on the other hand, was more of a doodle, a psychedelic, vague shape representing the behemoth that the brand has now become, encompassing the hand-woven fabric but also, so much more.

There were loyal Khaadi customers who had initially taken offence to the logo change but now, in retrospect, the change makes sense. It is important for a brand to move with the times in order to resist stagnation, to up-end its prevalent image and its aesthetics in order to shake up the market and bring something new, to continue to cater to its longstanding customer base while drawing in the younger customers who will form the clientele of tomorrow.

This is the spirit running through the new Khaadi retail space, with its new stock and its little hubs where you can’t resist taking selfies and the little multi-colored ‘train’ area where you can rest midway through shopping.

But has Khaadi, by up-ending its image also up-ended the market and taken it over? This, only time can tell. I remember a time long, long ago when Khaadi was redefining Pakistan’s retail landscape and I would see at least four women wearing the brand when I stepped inside a café or a mall.

The brand new Khaadi is likely to get customers buying with renewed enthusiasm. It is likely that history will repeat itself. But like I said, time will tell.