Far from the madding crowd of luxury lawn launches and social media advertising bandwagons, came a magazine cover, floating out quietly on to Instagram – but raising so many eyebrows. In black and white, the spring edition of Harper’s Bazaar Qatar featured model Ravleen Varghese, turbaned, kohl-eyed, staring out at the camera. The credits stated that the jacket, trousers, top and headpiece were by designer Faraz Manan while her necklace and earrings were Chanel.

For designer Faraz Manan, it was a coup. He may not have made any grand declarations following the cover’s release but the image simply spoke for itself. 18 years ago, Faraz had been a young, gung-ho Pakistani designer ambitiously planning out his first ever shoot in Paris, with model Vinnie and hair, makeup and photography by Ather Shehzad. Today, he was on the cover of a prestigious, international magazine, nudging shoulders with no less than Chanel.

“I think it was as exciting getting featured on the cover of Bazaar Qatar as it was to have my designs accessorized by Chanel,” Faraz told me, speaking to me all the way from Dubai. I could sense him grinning at the other end of the phone line.

This isn’t the first time that Faraz Manan couture has been showcased in a major international publication. The January 2020 cover of Harper’s Bazaar Arabia had featured Australian model Shanina Shaik wearing Faraz Manan with accessories by Chaumet.

“This (2021) cover is more special because I feel that my couture is the highlight,” observes Faraz. “In the cover last year, Shanina Shaik took center stage. She was wearing a simple silk robe that I had designed. In the Bazaar Qatar cover, the couture detailings are the primary focus. The clothes are fully embellished and even the turban worn by the model is actually a dupatta. They wanted the model to be wearing head-gear so I wound the dupatta into a turban. The shoot is also going to be published in Harper’s Bazaar Arabia as a fashion editorial.”

Six years ago, Faraz had extended his considerable market in Pakistan to the Middle East by opening a store in Dubai. The Harper’s Bazaar covers can only be testament to his growing clout in the Middle Eastern market. I had to ask him, though: did he reach out to the Bazaar editors or did they select him?

“They reached out to me and it’s taken them more than five years to do so,” points out Faraz. “The Middle East has access to the world’s biggest couture labels and they can select just about anyone to feature on their covers. Perhaps the Bazaar editors observe which labels are popular with their target readers and then work out collaborations. I am happy to say that I have a growing clientele in the Middle East and maybe that has resulted in this cover. I don’t advertise overtly but when it comes to couture, word of mouth often helps in strengthening a designer’s market.”

Has Faraz ever wondered that his Pakistani market may get sidelined because of his expansion to the Middle East? “I am lucky that my Pakistani market has continued to do well. I operate through my studio in Lahore and online and customers from Karachi actually fly in to place their orders.”

He also stopped bringing out his annual luxury lawn collections some years ago. Was this also a result of his concentration on the Middle Eastern market? “It was because I stopped enjoying creating lawn,” Faraz corrects me. “Designing lawn collections is very time-consuming and a lot of hard work while the profit margins are relatively low, compared to couture. The lawn market has also gotten increasingly commercial and to be successful in it, I felt that I would have to end up changing my design ethos. I didn’t want to do that.”

Coming back to his Harper’s Bazaar Qatar cover, what does an achievement like this mean for him,  business-wise? “I can’t really analyze it quantitatively although of course it helps immensely in building the brand image,” he says. “Couture isn’t like ready-to-wear. It doesn’t immediately translate to sales. It requires patience.”

Faraz continues. “Patience has always been a major part of my journey as a designer.”

From my personal vantage point, I understand what he’s saying. Faraz Manan Couture has never opted to get featured in the slew of mediocre international magazines where cover features can be purchased. So many Pakistani designers have done so, proudly promoting their ‘international’ covers that have merely been orchestrated through payment rather than on the basis of merit.

Faraz also chose not to build his market in the Middle East by packing a suitcase and taking part in the exhibits that annually take place in Dubai, frequented particularly by the city’s considerable Indian and Pakistani residents. These exhibits are renowned for doing great business but Faraz opted to do things his way. He set up a flashy store in Dubai, backed up by a small-scale stitching unit where fabric, embellished in Pakistan, could be customized. He further built his profile by staging solo fashion shows. Before Indo-Pak relations soured, his Bollywood connections ensured that his showstoppers, actresses Kareena Kapoor or Karisma Kapoor, made headlines. 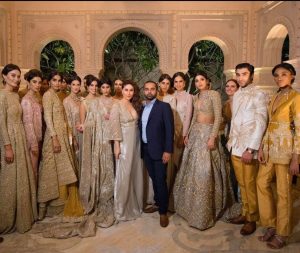 “Business has grown, slowly,” he insists to me.

Well, then, it’s also grown steadily. A Harper’s Bazaar Qatar cover, with the designs in focus, is a big deal. Even if Faraz isn’t trumpeting about it himself.