In a world cluttered with bling and repetitive design, in comes designer Hussain Rehar – and at a time when the design fraternity is ladling out heavy-duty embellishment, he decides to walk a path less trodden and go ‘Basic’.

A capsule line of 10 designs features clean palettes in raw silk and organza, accentuated by well-placed hand embroideries. There is naqshi and crystals bordering a hem and streaming down from a collar, rectangular borders forming glittering necklines, bunches of florals placed on a single shoulder. Long column shirts lead to long jackets, simmered lehngas and shirts paired with culottes, organza dupattas scattered with beads or sequins. It is fuss free, elegant, basic but not so basic. ‘Basic Not Basic’, Hussain’s latest line of luxury-pret, was launched without much fanfare. There was no overt advertising all across social media or a theatrical video announcing its release. It wasn’t placed out on a catwalk and hasn’t even been seen on the red carpet yet, worn by a celebrity. In fact, it isn’t a theatric collection at all, relying on simplicity, cuts, pure fabrics and uniquely placed embellishments.

This, in fact, allows it to stand out at a time when every collection is dependent on theatrics. Designers have been investing heavily into celebrity showstoppers, fashion videos and social media mileage while forgetting to innovate within their designs.

Why, though, did Hussain bring out a basic line at a time when the wedding season is in full swing and he could earn much more by showcasing a far heavier lineup? “I was supposed to launch my new bridal collection but then I got busy with orders and I realized that I wouldn’t be able to create the collection in time,” says the designer. “I then decided to bring a shift in focus with a line that featured chic, wearable, timeless pieces. The silhouettes are clean and breathable, the embroideries are all by hand, the fabric is pure and the clothes work well for parties, wedding dholkis and formal dinners.” 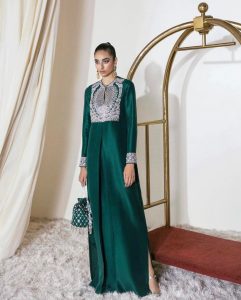 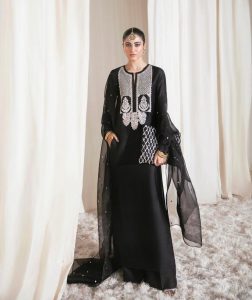 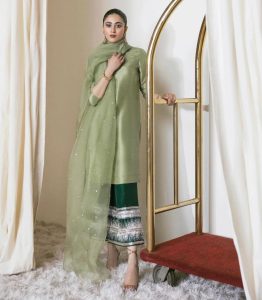 As a relatively new designer, it is impressive how Hussain is willing to take risks and dabble with innovation. I remember when he first started out, he made his mark with a series of modern silhouettes in vivacious color combinations. Now, a few years later, he describes his business to me as ‘stable’. The modern, experimental design still surfaces but his aesthetic has also steered into bridal’s lucrative playing field. He works well with all the usual bridal-wear leitmotifs – bling, embroidery, color and flowing silhouettes – but Hussain Rehar remains one of the very few Pakistani designers who is usually able to give them a slight edgy tweak, a distinctive detail, something that makes the clothes stand out.

“I do try to make the effort to create wedding-wear that will be pretty and appeal to the conventional customer but will also have be offering something new,” says Hussain. “I think that it’s important for a designer to do that.”

It’s a balancing act that he understands well. In recent times, I have seen a number of celebrities eagerly opt for Hussain Rehar designs. Actress Aiman Khan wore a beautiful black sari by him and then, a pastel pink intricately worked shirt at her sister Minal Khan’s wedding. A slew of celebrity weddings coming up this winter will also be featuring his designs. Model Neha Rajpoot looked beautiful in a bridal by him at her recent wedding. It exemplifies that while most design houses are happily creating ubiquitous wedding-wear, profits can also be earned with designs that try to push the envelope. Creative, vivacious design that simultaneously has an eye for commerce can be lucrative as well as haul in awards, as is the case with Hussain.

And that sometimes, when Instagram is replete with images of long, heavy trails trudging down a catwalk, when a crimson lehnga with untidy red embroidery is masquerading as ‘couture’, when even established ateliers have decided to sell and re-sell popular past collections, a new take on design can be a breath of fresh air. Especially when it’s Basic … but not so Basic.