A boy and a girl stare at each other, drenched in the rain. He is on his knees, she is wearing red with strands of jasmine wound through her hair. It’s a scene laden with romantic chemistry and it’s likely that you can hear music playing in your head. The visual itself has a cinematic appeal to it and you could imagine the story unfolding on the silver screen – instead, the romance is going to be playing out on TV’s very soon.

This, perhaps, is going to be one of the biggest draws of IDream Entertainment’s upcoming drama Pehli Si Muhabbat. The initial sneak peeks reveal a star-studded cast and plenty of romance. The drama’s producer, Abdullah Seja, observes, “It’s a love story and with Anjum Shahzad directing it, we have tried to give it a cinematic feel. Shayan Latif, the Director of Photography (DOP) of the movie ‘The Legend of Maula Jutt’, is also our DOP. We have worked on building characters and the cast is very interesting too: Sheheryar Munawar, Maya Ali, Nausheen Shah, Rabia Butt and HSY, making his TV debut.” 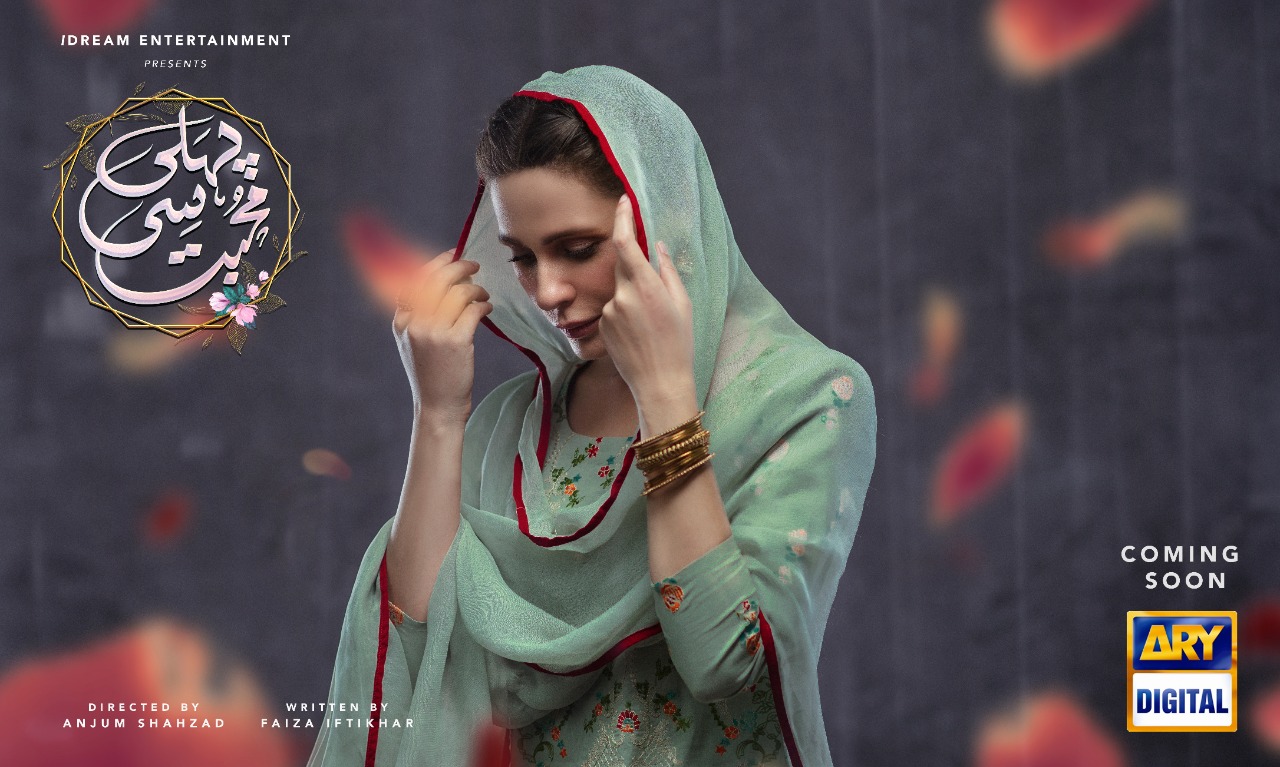 Here’s what particularly stands out:

Sheheryar Munawar and Maya Ali get paired together – and make a TV return after years!

Actors Sheheryar Munawar and Maya Ali had diverted to cinema in the past few years and incidentally, their most recent acting project was Asim Raza’s film ‘Parey Hut Love’ where they were paired together. The two made a great romantic pair and Pehli Si Muhabbat promises to translate their cinematic romantic chemistry to the smaller, but much more widespread, reach of the TV screen. Sherheyar will be returning to TV after a sabbatical of seven years while this will be Maya’s first acting project since ‘Sanam’ in 2017. Building up the hype have been some sizzling fashion shoots featuring the actors together, fortuitously filtering out on social media and building hype for their upcoming drama. HSY makes his acting debut – and it looks like he’s going to be ‘Shariah-compliant’! Fashion designer HSY has always been an ingenious showman which is why when he announced his TV acting debut in Pehli Si Muhabbat, it made sense. Shero was bound to diversify towards acting at some point. His look in the drama, though, is unprecedented. Dressed in a kurta shalwar with a prayer cap on his head, he plays ‘Akram’ and as Sheheryar Munawar recently jested in an Insta-story post, this is going to be a ‘Shariah-compliant’ HSY! 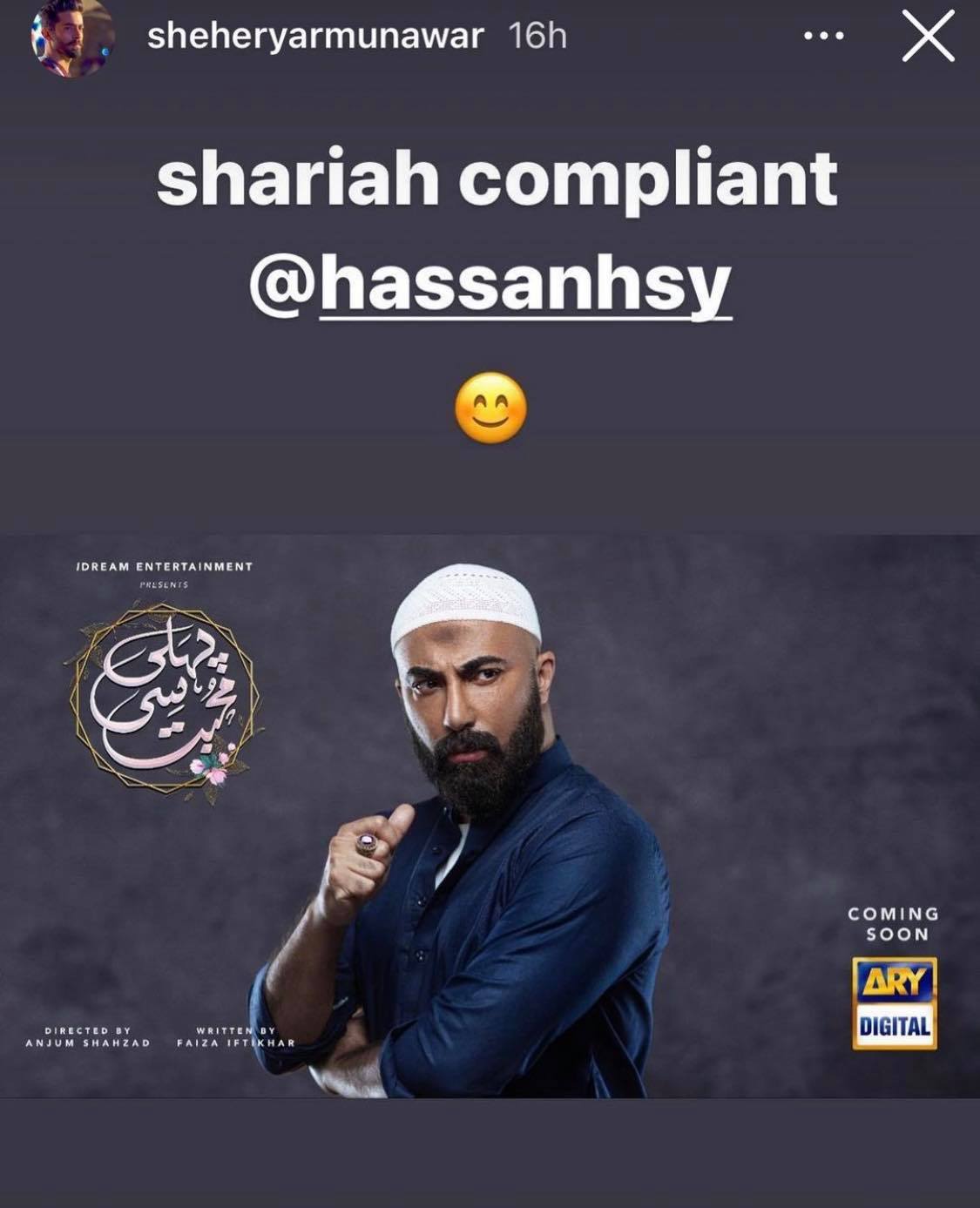 HSY will be paired with actress Nausheen Shah in the drama.

Anjum Shahzad is a creative force with an extensive, impressive repertoire to his credit. A drama directed by him inevitably turns out to be meticulously crafted and entertaining. Pehli Si Muhabbat marks his return to the ARY Digital platform. Hitherto, in recent times, he has directed Khaani and Romeo Weds Heer for GEO TV and Doosri Bivi, Rang Laaga and Kabhi Kabhi for ARY.

And then there’s the first poster of the drama, depicting the aforementioned rainy romantic scene. Most TV dramas get announced with a basic banner, showing head-shots of the main characters with the title emblazoned in bold letters. The makers of Pehli Si Muhabbat opted, instead, to take photographer Abdullah Harris on board. Abdullah, of course, has a penchant for theatrical imagery and the image on the first poster draws the eye, builds up curiosity and gives a whiff of an all-out romantic extravaganza. The individual character reveals, similarly, are intriguing.

You can count on plenty of starry selfies floating about when you’ve got HSY on board. Seen here with co-actors Sheheryar Munawar and Uzma Hassan

Pehli Si Muhabbat may just turn out to be another feather in IDream Entertainment’s cap.