Fashion’s moved firmly into the digital age, where every image is evaluated for its Insta-worthiness and the online customer is just as highly coveted as the one that physically walks into a store. Where once Pakistani designers planned out seasonal collections and there was a hype and hoopla to fashion weeks, now all we see is beautiful Instagram campaigns and detailed imagery uploaded onto efficient e-stores. The post-Covid fashion world may have had long made a return to the catwalk internationally but in Pakistan, fashion has comfortably sequestered itself into a social media bubble which may be business-savvy but cannot eliminate the ennui of observing a design from the limited visuals of a cellphone of laptop screen.

At Lajwanti, one of Lahore’s longest-standing brands for bridal couture, a physical exhibit of elaborate bridal-wear exemplified how important it is to sometimes shift focus from social media and deliver a fashion experience. The brand’s latest collection, Laal Bahaar, is an ornate ode to the grandeur of the Mughal dynasty. It has already made waves on social media with a campaign that features veteran model Vaneeza Ahmed making a return to fashion after a long, long time. Now, the lineup of heavy duty bridal-wear was put on display on mannequins for an exclusive viewing. The exhibit took place at the Lajwanti store in Lahore’s Gulberg area and quite aptly so, since there really could be no better setting for bridal-wear. A carved wooden archway lead inside the store where bowls filled with rose petals, candles, diyas and incense-burners filled up every corner. There were more elaborate archways within the store, antique wooden doors framing the walls, an old-world carved swing taking center stage in one room and adding to the ambience, musicians playing the sitar and tabla live. Scattered amidst it all were a series of mannequins in bridal-wear. There were the cardinal reds and the softer pastel shades, lehnga-cholis mixed in with a smattering of farshi ghararas, angarkhas, saris and peshwazes, intricate Lucknawi chikankari mixed in with dabka, resham, mukaish, dabka-naqshi and dense crystal clusters. The designs had looked stately in the social media campaign which launched a few days ago but at this exhibit, the elaborate hand-embroideries could be admired up-close. 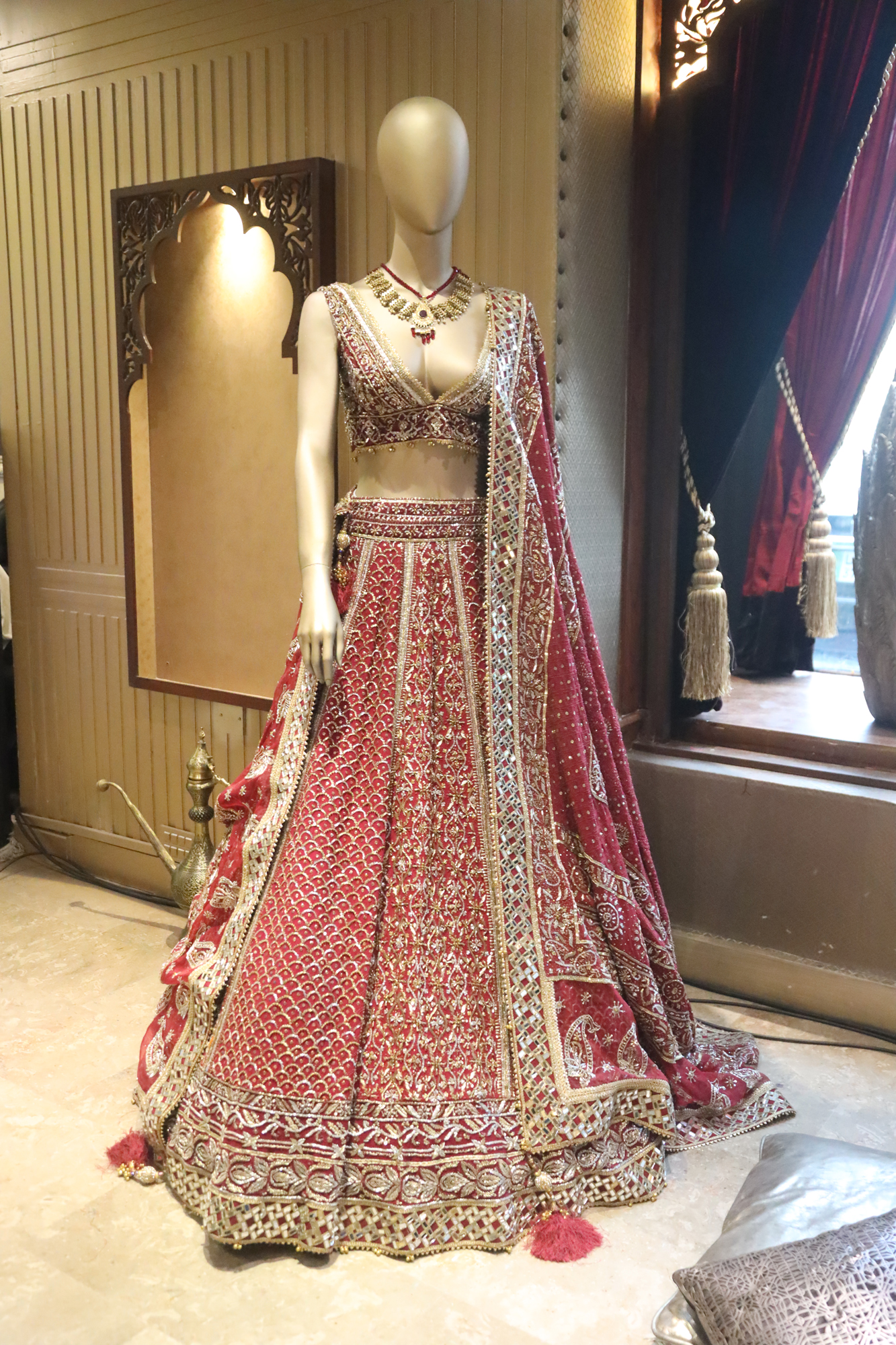 “This collection is particularly inspired by the reign of the emperor Jahangir,” Dania Syed, the Creative Director at Lajwanti, told me. “While many of the other Mughals were obsessed with battles, Jahangir was one of the few who collected art and had it implemented into the architecture of the monuments that were constructed during his era. We visited some of these monuments which are in Pakistan. There are others in India that we examined up-close through Google. Every embroidered pattern in this collection and even the color palette can be connected to the art and architecture of those times.”

The designs have names that are reminiscent of their source of inspiration: for instance, the stately Taj Bridal Lehnga Choli which pays ode to the Bachha Taj mausoleum in Agra, the Shirin Bridal peshwaz with details inspired by Jahangir’s tomb and the Minari bridal lehnga choli which is a tribute to the expansive Chittogarh Palace, one of the largest forts in India. Winding threadwork on a lehnga represents flowing rivers, beautiful mirror-work lining the entire border of a dupatta is set in geometric patterns that pay homage to the décor in myriad Mughal structures, the Mehal Bridal Peshwaz is embellished with bird motifs and colors that pay homage to one of the most spellbinding structures within Delhi’s Agra Fort, the Begum Bridal peshwaz is resplendent with the Persian-inspired details that are unique to the mosque of Begum Shahi. 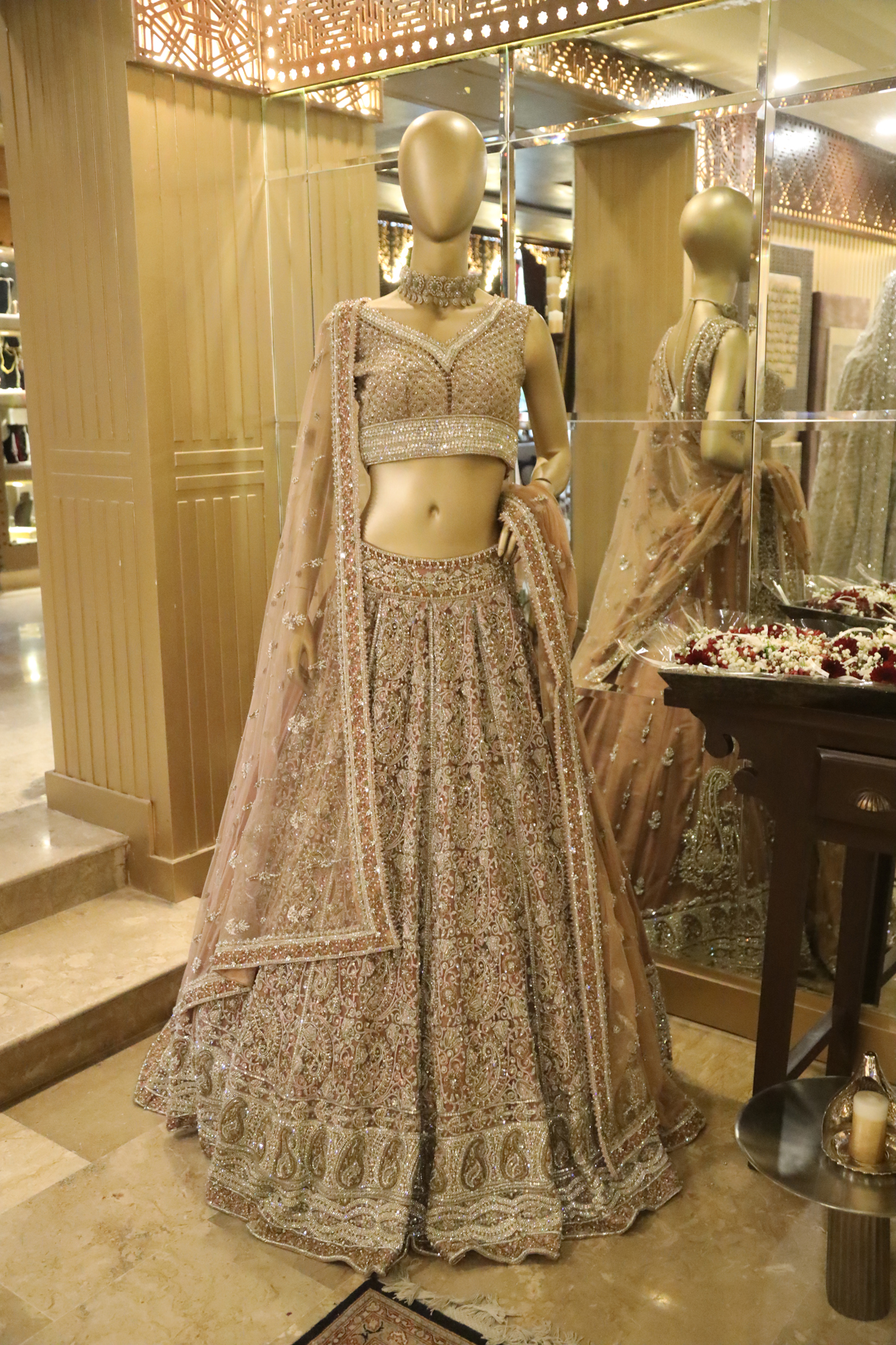 It is possible that the random customer may not be aware of the research and detailing that has gone into putting together each design but, as Lajwanti’s Head of Marketing Imran Salman Zia, pointed out to me, the overall effect is distinctive and beautiful.

“All the designs are hand-worked and can take three to four months to create, depending on how heavy the embellishment is,” says the brand’s CEO Ana Ali. “This is why we are very particular when taking custom-orders. We need to have enough time to create the design.” The Instagram campaign has already brought in an influx of orders for Lajwanti. Why, then, make the effort to deck out their store and have a physical exhibit for select guests? It’s a question that I asked myself prior to the event.

However, after attending and meeting the Lajwanti team and a smattering of Lahore’s fashion fraternity, I understood why: sometimes, it is important to see a design physically, to admire the fall of a dupatta, the mirror-work lining a lehnga and the embroidered patterns meshed down the length of a peshwaz by scrutinizing it up-close.

Sometimes, it is important to step away from the familiar landscape of the Internet and display designs – particularly couture – if not in a fashion show then in an exhibit or an installation. Lajwanti understands this. Many other brands need to do so too.

Designers that I miss seeing on the catwalk