The sprawling green fields of Southern Punjab, the urban jungle of London, weddings and exquisite, palatial havelis – London Nahi Jaunga (LNJ) has been shot so beautifully that the very first frame draws you in and holds you hostage for the movie’s approximately two and a half hours long duration. But even the most breathtaking scenery wouldn’t have had sufficed, had the movie not had much more to offer.

With director Nadeem Baig’s discerning eye set behind the camera, to the tune of a story and dialogues written by Khalil-ur-Rehman Qamar, LNJ’s romantic odyssey unfolds at a languid pace. You sit back and enjoy it; the emotional wordplay, the humor laced so well into the scenes, the music which sifts from upbeat numbers to soulful odes to love. It isn’t a story that is entirely unfamiliar but romances tend to follow certain conventional parameters – it is the way that they are told which matters. 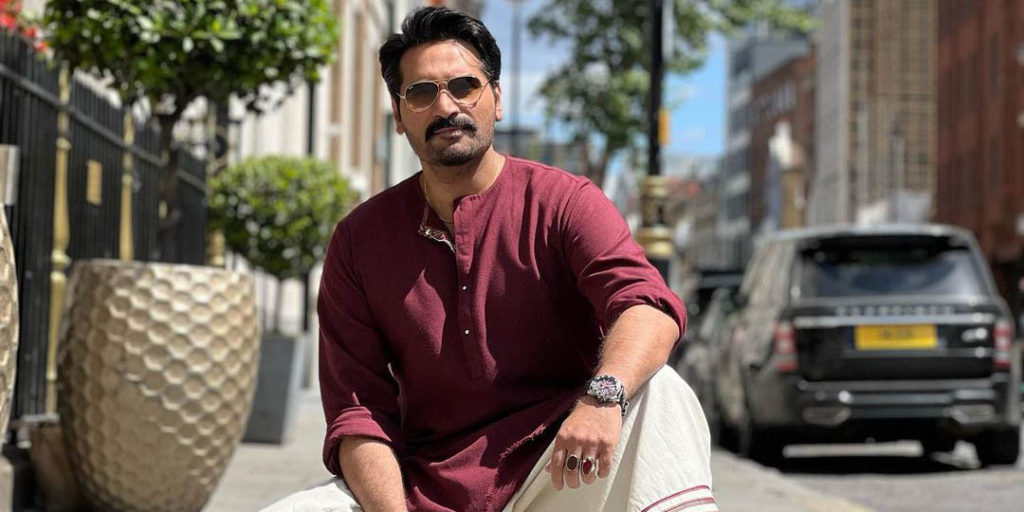 Humayun is Chaudhry Jameel, the befuddled, naive scion of a powerful feudal family in Bahawalpur. Jameel is fond of horses and racing dogs, wants to marry a girl who is not from Pakistan and remains a bachelor despite his parents constantly making joking references to his mature age. He vouches that he will get engaged to his cousin – phuppo ki beti – Aarzoo, aka Kubra Khan, should his dog, imported in from Japan, lose out on a race. Much to his dismay and the dismay of his sidekick Bhatti, played by Gohar Rasheed – a character that simply agrees with everything that ‘Chaudhry sahab’ says, the dog loses to a local bitch.‘ Japan say China ka kutta bhej deeya’,  Jamil comments, one of the many humorous statements woven so well into LNJ.

A little later, he poetically tells Aarzoo, who is in love with him despite being aware of his disinterest, ‘Aarzoo meri aarzoo na kar …’. His parents, however, refuse to stop the proceedings for the engagement and the cinema screen pans out to a grandiose engagement party. There’s a song, some dancing, a whirl of glitter courtesy the gorgeous wedding-wear created by designer Umar Sayeed. But then, right before the engagement ceremony, Zara, played by Mehwish Hayat, quite literally waltzes in. In a black leather jacket, speaking in slightly accented English, she asks to be shown the haveli on the pretext of writing a research paper on subcontinental architecture. It turns out that she already knows quite a bit about the haveli and the family that resides within it. Jameel doesn’t notice this. He is smitten while a heartbroken Aarzoo watches on.

In the scenes that follow, it becomes apparent that Zara has a hidden vendetta. Jameel, meanwhile, becomes more and more obsessed by her, staring at her moonily as he makes repeated declarations of love while she haughtily turns him down. There are songs, dashes of comedy, fights and rain, pelting down on an umbrella in classic fimly style, while Jameel and Zara face each other. Harry, Zara’s best friend from London played by Vasay Chaudhry, makes an entrance. Bhatti aids and abets Jameel in his romantic endeavors.

Certain revelations regarding Zara lead to the village panchayat asking Jameel to take an oath that he would not follow her to London. Lo and behold, he flies off to London soon afterwards with Bhatti in tow. 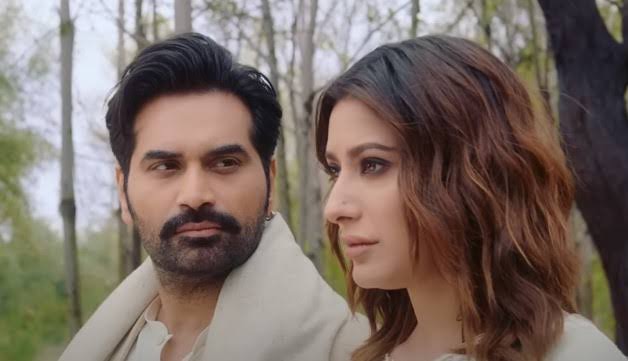 Some of LNJ’s most memorable scenes feature Sohail Ahmed, who plays Jameel’s father, whose comic timing is brilliant. He is volatile, flying into a rage and threatening to write off Jameel from his will, only to simmer down almost immediately. He teases his son and wife, jokes often, cries for his family and draws a smile almost every time that he is on screen.

In one scene where Jameel is having dinner with his parents, he asks his mother, enacted by Saba Faisal, his age. “You’re younger than your father,” she deadpans. A little later, his father quips, ‘You’ve made him happy, saying that he’s younger than me.”

It’s interesting that while Humayun Saeed may be the movie’s hero, he’s very willing to keep the story realistic by alluding to his mature age. The actors wears a kurta and dhoti for most of the movie and he looks great. His screen presence is, of course, undeniable – it has been honed and perfected over the years – and he brings it out it in full force. He dances, laughs, cries, fights off goons in Punjab and then again, in London and plays the befuddled, obsessive Chaudhry in love with great gusto – a superb performance, certainly.

Just as brilliant is Mehwish Hayat as Zara, a girl with a mission that could possibly get waylaid because Jameel has fallen in love with her. Defiant and forthright, it is riveting how Mehwish emotes with her eyes – they glitter quite convincingly as she turns the determined Jameel down time and again!

Kubra Khan also acts extremely well although her  scenes are fewer in comparison. She is entrancing as Aarzoo; kohled-eyes rimmed with tears as she contemplates leaving the faithless Jameel, battling between love and good sense and refreshingly, refusing to be a doormat. 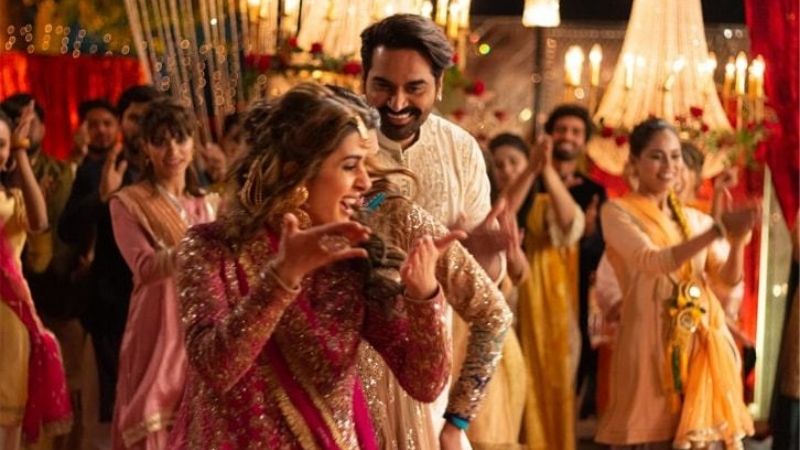 Vasay Chaudhry’s barely there scenes as Harry offer whiffs of the actor’s flair for comedy. Similarly, Gohar Rasheed makes good work of a role that is limited in its uni-dimensionality. This is a pity. Should both Vasay and Gohar have had more well-developed roles, it would have added to the movie’s entertainment value. One certainly wanted to see much more of them.

Despite this, LNJ has a storyline that has been developed well, touching upon family politics, feudal customs and gender biases entrenched within the Pakistani mentality. There are a few questions left unanswered, the foremost being whatever  did Zara hope to achieve when she had initially visited Bahawalpur. Why did she suddenly decide to return home when she hadn’t yet achieved it? Or was she there just to make sarcastic, angry declarations, glittering eyes and all? Were these particular aspects to the story somehow overlooked by LNJ’s makers, despite having had a Covid-induced two year long sabbatical for ironing out potential flaws?

Aiding the movie is a strong musical score, consisting entirely of Punjabi songs. Ve Pardesiya is sad and romantic, as is the very memorable Yaar Chadh Gaya. Marjaaniye is the quintessential shaadi dance number and the cast dances very well to it! The background score by Shani Arshad is also beautifully interspersed within the scenes. Credit for this must be given to director Nadeem Baig’s gimlet eye for storytelling.

There’s also the attention to detail given to styling. From London to Bahawalpur, dhotis to wedding-wear to the winter-wear meant to combat London’s blustery winds, each character dresses his or her part impeccably. The dialogues are often very well-constructed, meant to make impact, a talent that is writer Khalil-ur-Rehman’s claim to fame. There are speeches that will jolt you, make you clap or draw out a laugh. It’s an intelligent, entertaining script with well-balanced, well thought-out feminist elements.

At the same time, this very script and Khalil Sahab’s dialogues sometimes end up being LNJ’s weakest points. Perhaps the writer was so engrossed in putting his reasoning across that he penned dialogues implying the same thing again and again … and again and again. One character makes a long, impassioned speech and then, another decides to make a similar declaration, and then another. The reasoning itself is very pertinent and hits all the right notes – the repetition, however, can make you impatient, particularly in the movie’s last half an hour.

LNJ is such a well-made, well-acted movie that one wishes that Khalil Sahab had been asked to edit the script and make it more concise. It would have had definitely strengthened the narrative.

Having said that, the narrative is still a powerful one. You get hooked on to LNJ and the lynchpins that form its essence. You leave the cinema and fondly remember Chaudhry Jameel’s feeble attempts at poetry.