Pakistani social media was aghast all through last week, riled by a video floated out by the owners of a restaurant in Islamabad, Café Soul by Cannoli. Declaring that they were ‘bored’, the two women proceeded to ridicule the English-speaking skills of their café’s long-time manager. Twitter went off on a rampage and #BoycottCannoli trended on number 1 for more than a day – an organic, genuine topic trending, for once, rather than the usual, especially planned out hashtags.

The café has since then been the topic of memes, comic videos and even an Urdu mushaira, held outside it in retaliation to the owners’ apparent disdain for the national language. Allegedly, unable to tolerate the backlash, Cannoli in Islamabad has closed down for now.

But the whole-hearted hostility directed towards Cannoli is very obviously indicative of an issue that runs much deeper. The two women, looking down upon their employee from their privileged self-elected pedestal, highlighted a sentiment that so many of us observe around us, constantly: how English – accented preferably – is considered by so many as a sign of superiority and being well-educated. To be ‘Urdu-speaking’ is akin to being uneducated.

These notions, unfortunately, are only promoted further by so many who belong to Pakistan’s well-educated, affluent elite. Rather than elevate a spirit of nationalism, they prefer to build upon the colonial complex that has become an inherent part of the Pakistani DNA. But while it is quite alright to prefer to speak English if that is what one is comfortable in, it is irreprehensible to look down on those who are not as proficient in the language.

The Cannoli owners’ patronizing, tone-deaf attitude was particularly nauseating but in truth, we have all – at some point or the other – made fun of people fumbling with their English-speaking skills. Meera and Umar Akmal have provided content for countless memes, ridiculing their usage of English words. Meera’s interview with photographer Tapu Javeri, where she couldn’t pronounce ‘photographer’, is infamous. Of course, Meere, being Meera, thrives on public entertainment and has, many times since, deliberately spoken in English in order to be talked about. Regardless, the fact remains that it is a Pakistani tendency to mock people who can’t speak English properly.

Remember this infamous YouTube snippet of Meera preparing to interview photographer Tapu Javeri? No one had any qualms in making fun of the actress’ English back then.

The team of restaurant Coffee Wagera quickly rushed in, following the viral Cafe Soul by Cannoli video, and made an ‘Urdu-medium’ statement!

It is also a very Pakistani tendency to feel insecure if one’s English-speaking skills are weak. Zeroing in on the fashion and entertainment circles, I have witnessed so many awards acceptance speeches, in which the winner insists on speaking in broken English.

Why did they even have to try to speak in a language that they were uncomfortable with? Why couldn’t they simply just speak in lucid Urdu, a language that they were fluent in and which the audience also easily understood? Moreover, why can’t awards ceremonies, targeted towards a predominantly Urdu speaking TV audience scattered across the country, be completely in the national language? Why do our stars, who work in Urdu dramas and films and sing Urdu songs, have to slip into English? Even if they are more comfortable speaking English, when they do so on a major platform, they end up alienating so many of their fans who are unable to understand them.

“If anything, this video has proven to be an eye-opener that we need to stop sidelining Urdu,” observes Ahsan Khan. “We need to own it and celebrate it. Even in our education system, Urdu is often not prioritized. How can we expect our next generations to be proud of our national language?” But does the pressure to converse in English exist in entertainment circles? Do celebrities also get ridiculed if their English is below par, much in the manner that the Cannoli owners made fun of their café’s manager Awais?

“There is no pressure within the fraternity to speak English. I think the insecurity is more personal and this is prevalent everywhere, not just in show business,” observes actor and producer Adnan Siddiqui. “From actors’ perspectives, if they are  not comfortable with the language and still insist on speaking it, then there’s always the pressure that the masses will make fun of them . On the other hand, there are celebrities who opt to communicate completely in Urdu; people like Savera Nadeem and Bilal Maqsood. They sound so elegant, conversing only in the national language.” It is particularly noticeable that models make an effort to converse in English during interviews and at awards ceremonies. Male model Hasnain Lehri, the recipient of multiple awards, feels that there is no need to do so. “I have seen my peers rote learn what they are going to say on stage just because they want to speak in English. There is no soul to what they say and no point to the effort. All around the world, people cherish their national languages and we need to do the same. As long as you speak with confidence, that’s all that matters.” All it takes is confidence. Hasnain Lehri (image via Instagram)

Actress Reema confesses to struggling with her English and taking multiple courses in order to become more fluent in it. However, she says that she made the effort only so that she could communicate better while in international locations. “I never tried to speak English deliberately when giving interviews in Pakistan. But yes, it became my passion to master the language and I took many, many courses to achieve this. I would be shooting abroad and enroll myself in an English language course. And when I attended events in India or elsewhere, I would speak English just so I could be understood easily. Urdu is such a beautiful language and I have never felt apologetic for speaking it.” But such confidence is not always easy to achieve. Anyone who has interviewed local celebrities frequently is acquainted with how some of them insist on speaking English despite struggling with the language. The post-colonial complex is certainly at work here, with them possibly associating glamour or elegance with eloquent English speech. Speaking from my own personal experience, while making a video of a certain actress, she insisted that I write what she wanted to say, in English, on a piece of paper. She then asked me to hold the page right next to my phone camera so that she could read from it much in the same way scripts are read out, from a news ticker, by newscasters.

Similarly, TV production teams will often recount how it took hours to conduct a video interview with a celebrity because he or she wanted to converse in English alone and would want retakes every time there was a mistake.

“I have known models to forego major interviews simply because they aren’t proficient in English and don’t want to communicate in Urdu,” says model Mushk Kaleem. “They let go of opportunities in the spotlight because they have glorified English in their minds. And really, sometimes you can’t blame them because there are people all around us openly making snide comments regarding language. If a model, known for his or her weak English, puts up a well-worded Instagram caption, you’ll hear the wisecrack that someone else must have written it. If someone is trying too hard to speak in English, others will tease them about it.”

“Our minds are still slaves to the English,” says actress Resham who confesses to never try her hand at speaking English when there’s the option of communicating in her national language. “We need to get out of this mindset.”

But it isn’t easy to eliminate a mindset ingrained into us over decades, so much so that it is veritably inherent within us.

“Look around you – all the A-list celebrities, working with top brands, are well-versed in English,” says Ahmed Ali Butt. “Even if it is subconsciously, we are all inclined towards speaking English, especially in situations where we want to project ourselves a certain way. It’s a worldwide problem. This obsession to speak English, to get impressed by people who speak English, even those who curse in English! I just worked in an Indian Punjabi film and it was wonderful how they were so proud of their language. We need to be the same.” If anything, we need to at least make an effort towards cherishing our national language. So many young boys and girls look up to celebrities and place them on a pedestal – in recognition of this, celebrities need to be more responsible in the way they communicate publicly. Why should they breed insecurities by speaking in a language that most of their fans don’t understand?Why can’t awards ceremonies and interviews, aired out extensively on TV, make it a rule to keep the language restricted to Urdu?

“The colonial hangover needs to end,” says Sheheryar Munawar, “and everyone needs to make an effort to make it end. I, for one, am going to try and communicate in all my interviews in Urdu.” It’s an important first step, to be hopefully followed up by many more. And yes, readers may find it ironic that this point is being put across in an article, written entirely in English. But to speak English within the privacy of your home, according to the requirements of your profession or simply because you are more comfortable speaking it is not what is being contested here. To ridicule someone because they cannot speak it as well as you do is the point of contention.

The world is evolving and so is Pakistan and now, more than ever, it has become important to take ownership of our national identity. Respect for our national language – its inherent poetic beauty and poignant wordplay – is but necessary. 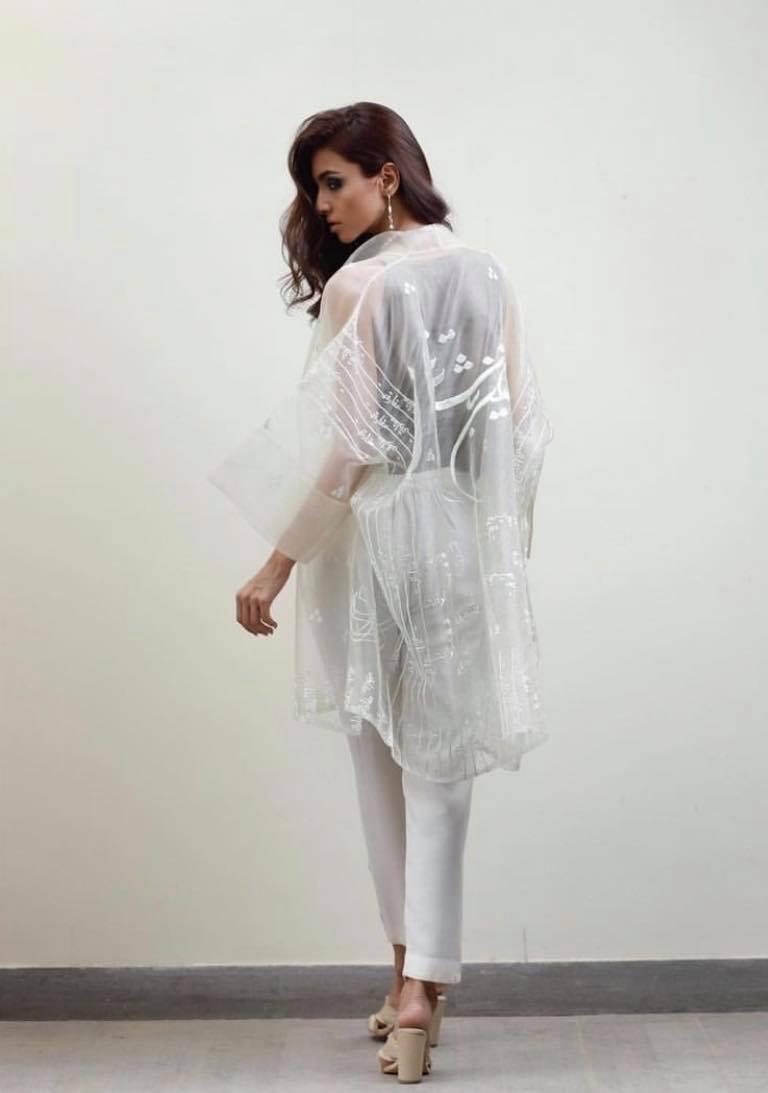 Two of my favorite designs; on the left, by Sonya Battla, U R D U, inspired by the poetry of Ameer Khusro; on the right, poetry by Ghalib etched on sherwani by designer Munib Nawaz, worn by Ali Noor