It’s going to be a long Eid-ul-Fitr break this year – and based on the weather reports, a very hot one. Come rain, come shine, Eid is a time for family and celebration but when the mercury rises, it’s also a time for lying back in the late evening and watching a selection of special shows. Eid ‘specials’ tend to follow certain guidelines: the dramas are feel-good and family-oriented, there is always a sprinkling of romance and a slew of top tier actors form part of the cast. For many of us, they are an integral part of Eid celebrations.

This year, following a very successful run all through Ramzan, 7th Sky Entertainment’s hit drama Chaudhry and Sons will be rolling out its last episodes on Eid on Geo Entertainment. A mega episode will be shown on the first day of Eid, followed by the very last day on the third day. “Chaudhry and Sons has been such a success and loved by so many, that we felt that it needed to be part of the audience’s Eid celebrations,” says producer Abdullah Kadwani. 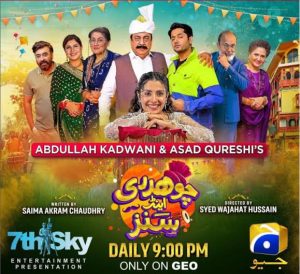 Another 7th Sky Entertainment hit, the telefilm Ruposh, starring Haroon Kadwani and Kinza Hashmi which aired in early January this year is scheduled to re-air on the second day of Eid on Geo Entertainment. While Ruposh may have released on TV, it was lauded for having a film-like feel, with songs, dramatic settings and a story that traverses love, angst, loss and eventual victory. A story of young love, of course, works well for Eid night. There are also two special Eid dramas that will be airing. ‘Love life Ka Law’, scheduled for the first day of Eid, stars real-life husband and wife Asad Siddiqui and Zara Noor Abbas Siddiqui together, as well as Agha Ali, Sidra Niazi, Mahmood Aslam, Saba Faisal, Samina Ahmed and Ali Rizvi, among others. The drama narrates the story of two lawyers; Maya, who is committed to her work and Asad, who tends to be easygoing and careless. The two are in love but eventually part ways. However, sometime later, the two find themselves facing each other in court, sorting out the marital issues of their respective clients who are husband and wife. Arguing in front of a judge, trying to make or break their clients’ imperfect marriage, the two may end up rediscovering their feelings for each other. Another drama, Mast Mohabbat, is scheduled to air on the third day of Eid and stars Ushna Shah, Muneeb Butt, Hina Dilpazeer, Rashid Farooqui, Fazila Qazi, Ali Tahir and Javeria Abbasi, among others. The story revolves around Noor Jahan Begum, a matriarch who excercises complete control over her household. When Noor Jahan Begum’s only grandson Affan is expected to return from abroad after completing his studies, she decides that he will get betrothed to Anchal, her granddaughter. She orders for wedding preparations to commence but meanwhile, Affan brings back his friend Maham with him who he eventually wants to marry. A series of hilarious events ensue as both Affan and Anchal try to find a solution. These happy-go-lucky storylines are especially aimed for family viewing all through the festive occasion. Even in Ramzan, Abdullah Kadwani and Asad Qureshi of 7th Sky Entertainment had planned out a heavy duty schedule, topping ratings with stories that were especially designed to educate and simultaneously entertain audiences: the laugh-a-minute Chaudhry and Sons with a story entrenched in family values, Dikhawa targeting the prevalent culture of showing off, Makafat reflecting on individual deeds, Nisa dedicated to women’s rights and Maamlat, telling stories revolving around everyday affairs.

Come Eid, producers Abdullah Kadwani and Asad Qureshi recognize the audience’s need to celebrate and the narratives have shifted to some good old fashioned happy-go-lucky stories. It’s going to be an entertaining three days!