‘Who’s going to turn out to be the fraud?’

It’s a question that comes to mind immediately while watching the teaser of upcoming drama ‘Fraud’. Starring Mikaal Zulfiqar, Ahsan Khan and Saba Qamar in titular roles and produced by iDream Entertainment, the drama is about to air on ARY Digital. It marks the return of Saba, Mikaal and Ahsan to TV together after Paani Jaisa Piyar from 11 years ago. With all three actors seasoned in their field, any one of them could adeptly play the fraud in question. The very first teaser which has just released sheds some light on the mystery. Ahsan Khan, suited, booted and driving in an Audi, is shown making plans for a trip to Dubai. The car steers towards a musty, littered street and he gets off. A little later, he is shown in a kurta and dhoti, speaking in Punjabi. Very evidently, this man isn’t what he appears to be. A voice in the teaser warns, ‘Once they discover your reality, they will do with you what you have been doing with these girls’. Ahsan may just be our fraud.

And given Ahsan’s recent spate of performances, he’s likely to pull out all stops. The actor has a penchant for playing complicated characters who often have negative shades. He impressively transforms even the most generic character into an interesting one. A wheeling dealing, two-faced fraud ought to be right up his alley. 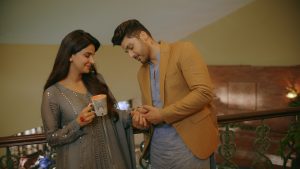 Ahsan’s co-stars may be just as riveting to watch. Mikaal Zulfiqar is a veteran who may have had been a favorite chocolate hero at one point but has since then, progressed to a range of diverse, multidimensional roles. He picks and chooses his projects carefully which leads one to assume that his character in this particular story must be a nuanced one. Saba Qamar is an actor par extraordinaire, getting into the skin of every character she plays. When Saba’s on screen, she holds her audience there, fixated.

It’s too early, though, to say much about the drama. It is important to note, though, that the drama has been penned by Zanjabeel Asim Shah, writer of many hit dramas including Cheekh and Pyar Kay Sadqay. The drama is directed by Saqib Khan who recently also helmed Hangor on ARY Digital. Saqib, incidentally, has a repertoire which frequently stars Saba Qamar; the recently released UrduFlix original Naina ki Sharafat, the soon-to-release drama Tumhare Husn Ke Naam, upcoming Eid cinematic release Ghabrana Nahi Hai and finally, Fraud.

The drama airs in a few weeks. More on it once the first few episodes roll out!