‘Kaash koi jaane…’ sings Zeb Bangash, and her ‘kaash’ comes layered with a sense of yearning. On-screen, Saba Qamar and Hamza Khawaja meet on a dusty mountain top and flit amongst trees. They twirl in a ballroom dance; he in his creased shirt and she, with a dupatta wound about her neck. The innocence of young love, the longing that comes with it and the fear of loss, not quite acknowledged but still there, peering its head from the crevices; all swept up together in a visual and musical odyssey that begins with a meaningful ‘kaash’.

The song, one amongst the incredible six song montage that is part of Sarmad Khoosat’s just-about-to-release movie Kamli, is close to singer Zeb Bangash’s heart. For one, it is one of the last songs that she has sung which had lyrics penned by the late Shakeel Sohail.

“It’s an emotional song which encapsulates that particular moment in the film,” says Zeb. “The beauty of Kamli and its soundtrack is that the songs are a meaningful part of the story. Sarmad knew exactly what he needed to depict, the characters’ arcs and how the song would fit into the narrative. Several compositions were considered but then Saad Sultan came up with this song and it is simple and so effective. There’s the part that I sing and then, the male vocals by Sohail Shahzad are so powerful, rising to a high pitch.” 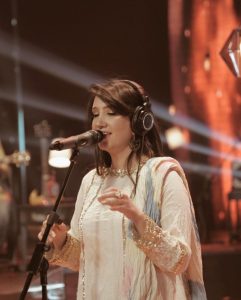 She continues, “When I heard the tune for the first time, the song came off as a sweet melody but it’s really quite layered and not run of the mill, a lot of like the movie itself and the girl whose story it tells.”

The girl in question is, of course, Saba Qamar, who plays Hina, the complex, love-struck titular ‘Kamli’. “I had always wanted to sing for Saba Qamar,” reveals Zeb. “She is always riveting on screen and this movie really showcases her talent. Saba emotes with her eyes and with her body language and the music and the visuals combine to tell this very touching story.” The acumen of Kamli’s music producer Saad Sultan is evident in the soundtrack, with its curated selection of poignant songs that draw you in. Zeb says, “I have worked with Saad Sultan before, on the Baaji soundtrack. He takes on selective projects and then, becomes part of the whole creative process which is why each song stands out.”