The Coke Studio behemoth is treading new waters – yet again. Pakistan’s most loved, most hated and longest standing musical platform has a tendency for frequent upheavals. Now and again, new producers take on its mantle, valiantly aiming for sky-high YouTube ratings by masterminding a collection of songs, devising ways to create the sort of magic that appeases the generally disgruntled critics on social media and hoping – praying? – that the positive feedback leads to many, many more people guzzling down soft drinks. It’s a gargantuan task and a slowly building list of producers have come on board, gung ho, and eventually, retreated, jaded and exhausted. 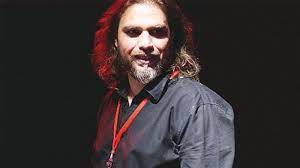 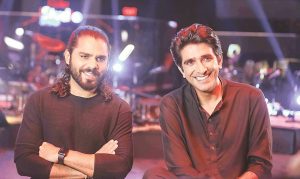 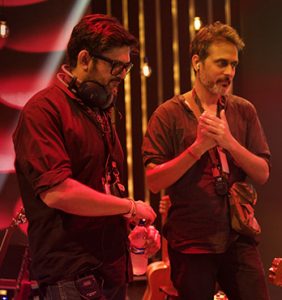 The many producers that have helmed Coke Studio: Rohail Hyatt, Zohaib Kazi, Ali Hamza and Strings

However, when Rohail Hyatt recently revealed on Twitter that he was no longer part of the show, it raised eyebrows. Rohail created CS and produced the first six seasons of the show. He made a comeback with the show’s 12th season in 2019, following it up with a Covid-compliant, sized down season 13 last year. How could he, the brains behind CS, the musical genius who created hits that are still played out on radio, performed in concerts and downloaded into personal playlists, leave merely after two seasons? Rohail Hyatt’s now infamous Tweet, in reply to a fan, revealing that he was not going to be producing Coke Studio Season 14

I was reminded of a conversation that I had with a Coca-Cola executive back when Rohail was coming on board again. Still reeling from the shock of a debacle called ‘Ko Ko Korina’ in CS11, the brand had decisively ousted then producers Ali Hamza and Zohaib Kazi who only got the chance to helm one season for the show. In order to evade all possibilities of future catastrophes, the brand was placing their faith in the man who had envisioned it all in the first place, fusing traditional music with the digital era. In the early years of CS, the dhol had played alongside the electronic guitar, Rajasthani ballads had merged with pop and a range of new sounds had been created, placing the show on a pedestal as a worldwide phenomenon. Now, like superman, Rohail Hyatt was going to raise the show from the ashes of the 11th season and return it to its former glory, making the YouTube views climb up ‘faster than the speed of light’.

He did do so, in many ways. CS12 had started off on a Friday, with the country’s biggest rockstar Atif Aslam dressed in white, praising God reverentially with ‘Wohi Khuda Hai’. The potent combination of celebrity and religious allegiance on the infamous neon red and black stage had had the audience in raptures. Then, with CS13, Rohail chose to open the show with a strong feminist statement, ‘Na Tutteya Ve’, sung by the female vocalists that were part of the season including Meesha Shafi who has been closely associated with the Me Too! Movement in Pakistan. It was a powerful beginning.

Generally, though, Rohail’s musical perspective has always been offbeat. CS aficionados remember the first six seasons of CS to be fairly experimental and often, understated. The music would be in the spotlight rather than the stars and most of the songs would slowly grow on you rather than be overnight hits. By the fifth season, Rohail’s take on fusion had started getting repetitive and perhaps knowing this, he had upended the formula in the sixth season, bringing in international genres of folk music. It had been a technically superior season but not a commercially viable one. The next season was produced by Strings instead.

Ironically, even CS’ initial heydays under Rohail’s leadership hadn’t been huge, commercially. The first four seasons had the occasional hit but the show’s popularity took its time in trickling down to the masses. Perhaps truly the first time that Pakistan decided to own the show was when our cross-border neighbors started taking notice of it. Bollywood star Amitabh Bachchan Tweeted about CS, followed by more Indian celebrities. The comment, ‘Kashmir lay lo, Coke Studio day do,’ floated out. And suddenly, Pakistan took notice of the show and decided that it should be proud of its musical innovations. Every episode began to get discussed and dissected. It became the platform that musicians aspired to be part of. 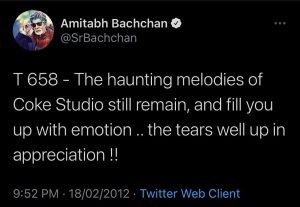 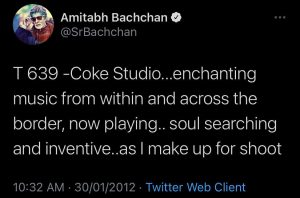 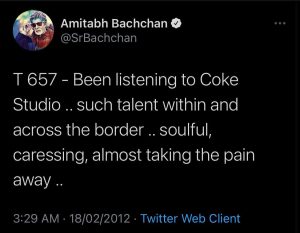 Bollywood actor Amitabh Bachchan’s Tweets about Coke Studio way back in 2012 – as is often the case, it had taken appreciation from across the border to make most of Pakistan wake up to the magic of Coke Studio and own it!

Without discrediting CS’s musical prowess, another reason behind its success was that it was the only show of its kind at the time. Now, though, Rohail had many other contenders simultaneously releasing new music. The coronavirus caused delays and technical malfunctions and somehow, the newly formed Velo Soundstation (VSS) came into the spotlight at the same time as CS13. Where CS’ approach was mellow and artistic, VSS relied on strobe lights and electronic sound in a club-like, digital stratosphere. Pushing VSS’ impressive artist lineup further into the spotlight was a massive advertising campaign – you could be watching a YouTube documentary on World War II and suddenly, Aima Baig would be on your screen in a several minutes long VSS ‘ad’.

Following up was Kashmir Beats, a show that took on board actors and had them sing on stage, applying enough technical modulations to make them sound passably melodious. It is nothing less than sacrilegious to compare the commercial KB stage to the puritanical musical vision identifiable with Rohail’s CS but the YouTube views begged to differ. The masses love celebrities – and don’t really have a liking for experimental music – and they tapped their feet and applauded the KB songs.

CS season 13, meanwhile, did well but in an offbeat way. Some of the songs grew on you, others did not. There was no anthem in the season that people would chant at parties, no shaadi song that they would dance to at weddings. Rohail may not have minded this but I am assuming that possibly the corporation he was working for must not have been happy. Simmering just beneath the broad declarations of supporting and amplifying the Pakistani music industry is the fact that CS has always been a phenomenal marketing gimmick for Coca Cola Pakistan. The corporation probably wants to haul in YouTube views, set records and create banners that proudly declare, ’50 million views in 3 days’! CS13 wasn’t that kind of season. And CS12 could have been that kind of season but suffered constantly due to copyright claims.

Then again, 13 years down the line, perhaps CS is no longer the kind of show that it once was. A decade ago, it may have set new benchmarks but now, maybe, online views are the priority. Had this not been the case, Rohail Hyatt wouldn’t have stepped away from his role as producer after merely two seasons. Once the initial surprise of his departure wears off, it all makes sense.

With the unlucky number 13 now behind it, the question everyone is asking is who will be producing the show this year? Evidently, there is a chance that Xulfi will be next in line and with his wealth of experience with commercial and non-commercial hits, he would probably be the best contender for the job. Rohail himself declared in a Tweet that Xulfi would be the ‘best option’. When asked about this, Xulfi stated, “Somehow, every year, my name gets connected with CS in some way or the other. Let’s see what happens.”

It’s April already and if a new season has to release this year, it is high time that the producer is announced; a bright, energetic visionary ready to get exhausted by the balancing act of infusing the show with new musical energy while catering to an exacting corporate culture. It’s a huge accolade for any musician to be selected as CS’ producer – but it is also a burden.