Awards season in a pandemic can be a drag. Over the past year, real life has been smothered with technology, the digital buzz of Zoom presiding over work meetings and computer screens replacing human interaction. The same tedium persisting at a celebrity awards ceremony erodes away at the glamour of the red carpet and the show itself. A celebrity acceptance speech via Zoom doesn’t really make for a riveting watch – we’ve already been having enough virtual conversations in our lives – and a few minutes later, we’re likely to switch the channel.

Moreover, if the awards results are known already, as in the case of last year’s pre-recorded Lux Style Awards (LSA’s), the anticipation of seeing the show diminishes substantially. We knew who was winning, the red carpet images had filtered out and we’d seen enough shows in the past to predict what the on-stage banter will be all about. Celebrities had even posted variations of their acceptance speeches on their Instagram pages. One did see the show for a bit, out of habit and driven by a vague curiosity, but most of us didn’t end up watching the entire two hour-plus ceremony.

With a pandemic at large, what could the LSA’s and show director Frieha Altaf do? The recording sessions for award winners and performances had to be divided over a span of several days in order to minimize risk of coronavirus infections. The results had to be revealed early. The show had to go on, even though the hype was much less and one truly missed the impromptu special moments where celebrities rubbed shoulders, real-life celeb couples were spotted together and the heartbroken nominee stalked off when he or she did win.

The recent Grammys, however, proved that even with the coronavirus resiliently on the loose, it is possible to retain some of the glamour and excitement of a live awards ceremony. It may be an organizational nightmare. It may lead to a considerable increase in expenditure but it is, in fact, possible to host a corona-compliant, star-studded awards ceremony.

Here’s what can be learnt from observing the Grammys, all from an online vantage point of course:

Keep it small but keep it live

The limited celebrity audience at the Grammys sat at safe distances from each other in a verandah at the open-air Los Angeles Convention Center, their faces masked and usually de-masking only when they came on stage. The new normal’s all about matching masks, of course. Billie Eilish at the Grammys

The venue was open-air, of course and even on the red carpet, stars were photographed from 15 feet away by five photographers. It’s in sharp contrast to the usual awards ceremony, thronged by hundreds of shutterbugs and media. But with safety being a priority, even more limited glimpses of the real thing were so much better than a digitized Zoom ‘carpet’. Some of the celebrity guests did participate through a virtual red carpet, like K-Pop sensations BTS who couldn’t make it to LA because of travel restrictions. The guest list at the Grammys may have been more limited but what a turnout it was! Beyonce and Jay Z, Harry Styles, Taylor Swift, Billie Eilish, H.E.R. and Trevor Noah, who was also the host of the show. That’s an A-List which is well-calculated to make waves. 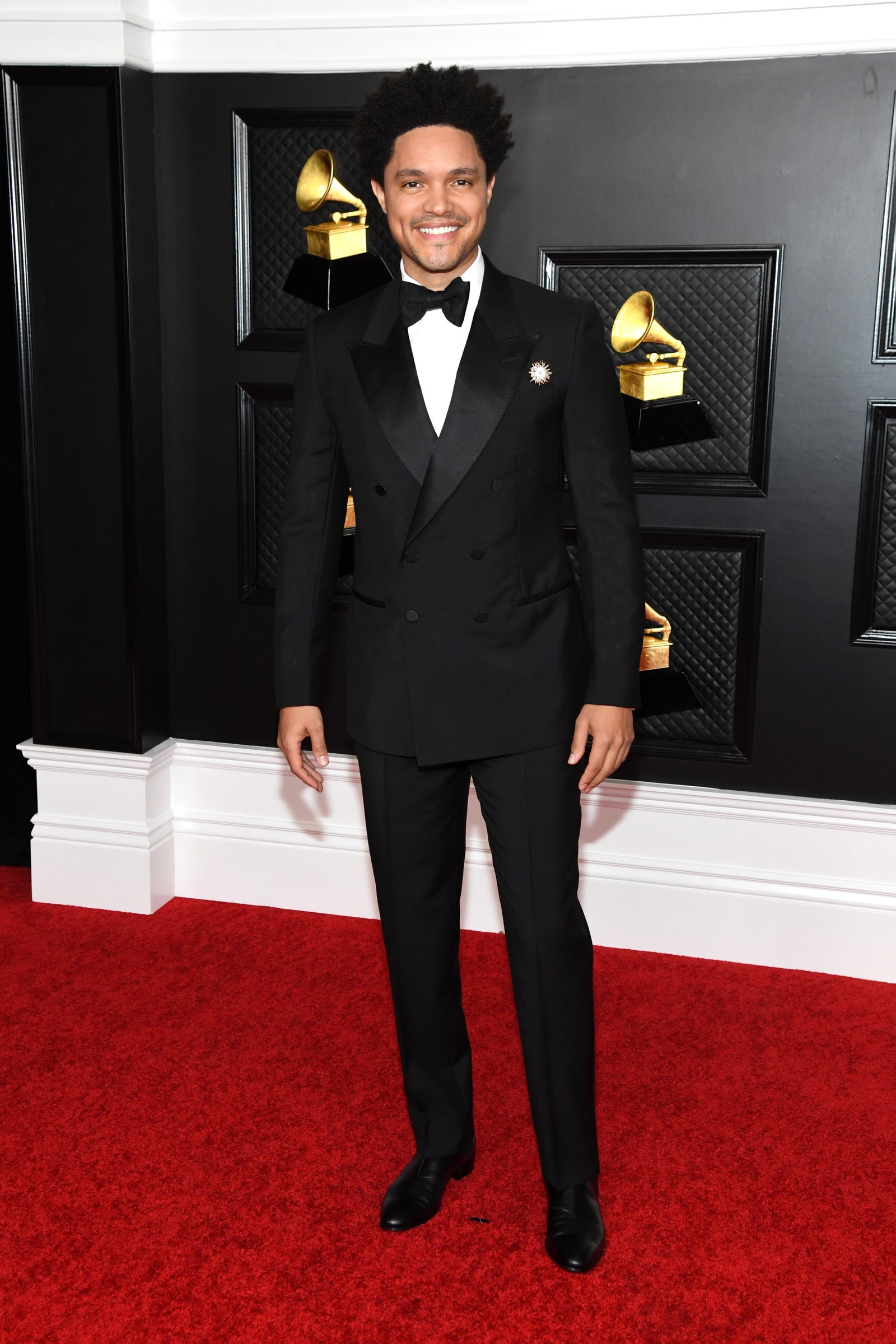 The Grammys red carpet is always very individualistic and it would have had been sad if it had been relegated to online attendance only. Seen red carpet-ing here, Taylor Swift in Oscar de la Renta, Trevor Noah wearing Gucci and Phoebe Bridgers in an embellished skeleton dress by Thom Browne (source: Getty Images)

Very limited media was also in attendance – not everybody and anybody due to the corona-compliant restrictions but just enough to make sure that the event got reviewed and raved about in detail. Reporters had to talk to celebrities one at a time on the red carpet, from a distance.

More than a year since concerts receded into the shadows, some of the performances at the Grammys went live! The performances were divided between five different stages. Separate tunnels had also been created leading up to the stages, ensuring the only one person could walk down a tunnel at a time. The show started with Harry Styles in a green feather boa crooning ‘Watermelon Sugar’, followed by Billie Eilish and Haim. ‘Watermelon Sugar’ served up as the opening act, with a green feather boa and a leather jacket sans a shirt inside! (Source: Getty Images)

One of the most awaited performances of the night, though, was ‘Dynamite’ by BTS, streamed out from Seoul because the boys couldn’t make it to LA. This particular observation has nothing to do with the coronavirus but obviously, it is essential for the host of an awards ceremony to be glib, peppering the ceremony with witticisms and a dash of slapstick. And Trevor Noah did a great job.

In the excerpts floating out from the Grammys, some of Noah’s best jokes poked fun at life, amidst the coronavirus. One of my favorite bits: “…we’re still broadcasting to you from the heart of downtown Los Angeles. This is not a Zoom background, alright? This is real. My uncle isn’t going to walk behind me naked even though I told him I was having an important meeting. That’s not going to happen tonight.”

And then, “…this is going to be the rare awards show where the white stuff going up people’s noses is cotton swabs. It’s really safe.”

Here’s another memorable quotable quote from Noah: “… music and vaccines bring people together.”

Noah did have an advantage over other hosts at recent major awards ceremonies because he was interacting in a live show. The Emmy’s last year, for instance, had been disasters, hampered by constant technical glitches, sound delays and the hosts Tina Fey and Amy Poehler trying to make sense of it all while interacting virtually through two different locations.

Zoning in on home ground, Ahmed Ali Butt has always been a great host, instantly likeable, very funny while toeing politically correct lines. He is in his element with a live audience, particularly when he roams through the star-studded front rows, making quips and grilling the audience. At the pre-recorded LSA’s, he did well, aided by Mehwish Hayat.

A live show is easier said than done

But while the Grammys, venturing into Covid-compliant live territory, may have been a success, the benchmark they have set is not an easy one to achieve. The event’s budget was reportedly colossal this time because of the safety regulations and regular Covid-testing that was part of the protocols. With the economy under crisis and corporations cutting corners, it isn’t possible for such major investments to be made in many cases.

Also, in some parts of the world, it may be easy to convince a celebrity audience to remain masked up but in Pakistan, we have a tendency to swipe off masks, squeeze in together and sometimes, yell ‘Pawry Horai Hai!’ For a major multinational corporation, like UniLever Pakistan which helms the LSA’s, the onus of staging a ceremony which may lead to multiple Covid infections is far too risky. How can people be forced to remain masked when backstage? One can only imagine the miffed egos and controversies should major stars be asked to stand far apart and refrain from taking selfies.

It is possible, though. To move beyond the virtual world again and plan out simplified ceremonies, to hear live music again, to lay out a star-studded red carpet. There is a sliver of hope, at least.

“This evening we’ll be celebrating music and hopefully forget all our problems…” Trevor Noah had said. A live show does wield that kind of magic.