“When media support comes in for a cause, organizations start working more fast,” said host Nida Yasir when she apologized for being considered insensitive while interviewing the family of Marwah, a five year old girl who was recently raped and murdered in Karachi. Nida continued, “Two days following my show, Marwah’s rapist was caught … her family got financial help through the media coverage that they got … they were sending me blessings for having helped them … my intention was to sincerely just help them but I am a human, sometimes with our without knowing it, I can make a mistake. Please forgive me. I will try to be more careful next time.”

She sounded contrite. It is true that when an issue gets highlighted by mainstream media, it tends to gain more traction. When a mainstream show like Nida’s ‘Good Morning Pakistan’ on a major channel, ARY Digital, gets aired, it can start off important conversations.

Similarly, when an issue trends as a hashtag on social media, it gets more attention. When celebrities with huge followings start making noise over a travesty, there is a chance that some sort of change could come around more quickly. Following the heinous rape on the motorway this month, Prime Minister Imran Khan declared that rapists shall be publicly hanged or chemically castrated. The media uproar following the rape may have been one of the factors leading to this announcement.

It would be extremely heartless if TV shows and celebrities went on depicting glamorous images of their lives while the country endured countless incidents of sexual violence. The conversations triggered off on Twitter have actually helped in stripping taboos off certain topics so that they are now discussed in drawing rooms and on dinner tables. Parents are making sure that their children are able to watch out for predatory behavior. It is constantly advocated that children should not be sent off alone in public areas or with domestic help. Media’s current ‘woke’ mindset has spurred a lot of these changes.

But the need to help and bring about change needs to be truly genuine. A crime as harrowing as rape needs to be dealt with sensitivity. The criticism levelled against Nida Yasir, even leading to the Twitter hashtag #banNidaYasir, was rooted in the questions that she asked the family as well as the experts that were sitting in the room along with the family. She commiserated with them but she also asked them for details of the rape, gory information that gave the audience goosebumps. The notion that someone could rape and murder a five year old child is debilitating all on its own. Details don’t need to be known.

In her apology, Nida did say that without knowing, she may have asked questions that people may have found offensive. The show was aired live and it is entirely possible that she may have just spoken without being careful. However, as a very popular host, with over a decade of experience, she is expected to be more diligent about what she says, even on a live show.

Similarly, when a celebrity protest was recently organized in Karachi, agitating against the gang rape of a woman on the motorway, it was supposed to be an indication of how stars are participating in movements that could lead to better laws. With popular stars addressing sensitive issues, it could be hoped that their huge mass fanbase would also gain more awareness regarding human and women’s rights in Pakistan.

Mahira Khan, veritably one of Pakistan’s biggest stars, attended the protest and spoke about how harassment ran rampant in the country and rapists were allowed to roam freely. Well-said. Other prominent personalitiescelebrities also made heartfelt speeches; among them, Adnan Siddiqui, Sarwat Gilani, Ayesha Omar, Maheen Khan and Frieha Altaf.

But then, a thread on Twitter, by Muhammad Moiz (@TMItalks) ranted about how the celebrities sidelined another protest that was taking place at the same time at the same place by transgenders, for their rights. The transgenders were moved away from view while the stars posed for the cameras.

Furthermore, a video floated out all over social media showed organizer Frieha Altaf and actress Sarwat Gillani on their way to the protest, saying that they ‘put the ‘pro’ in protest’. People were outraged. Perhaps the two women had made the video due to a habitual penchant for Insta-storying, but by doing so were they trivializing such a serious crime? Shouldn’t they have been more careful? 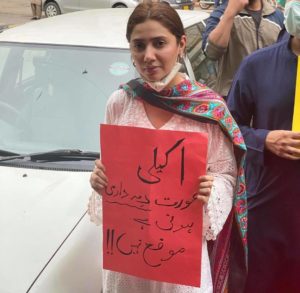 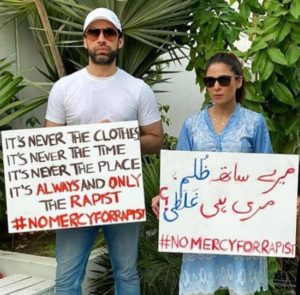 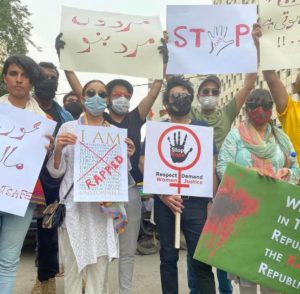 It is important to address social issues and crimes but does this also have to be done in an intelligent, mindful manner?

Obviously – although perhaps this is not so obvious to a large chunk of Pakistan’s celebrity fraternity.

“Every voice matters. Those of us who are privileged enough to have huge followings need to utilize this power to start off conversations,” says actor Osman Khalid Butt. “At the same time, all of us have to be cognizant of the language that we use and the way we behave. It is important to be careful and to genuinely believe in the cause. The fraternity needs to realize that their words have weight. And when victims or their families are called in for a talk show, it may be a good idea to have a psychiatrist at hand to assist them.”

He continues, “Just raising our voices or getting a hashtag to trend is not enough. We need to start following through on issues. There is so much filth all around us, roaming amongst us. An issue gets highlighted and then gets forgotten the next day. We need to make sure that the criminals do get caught out, they do end up getting punished.” Feroze Khan, who recently used his clout on Instagram to ensure that a boy, harassing and threatening a young girl, got arrested, says, “Intention matters. The way we talk about an issue needs to be sensitive. Sometimes we get so emotional that we don’t monitor what we are saying but an effort needs to be made not just to sympathize but also to empathize with the victims, to show that we are here with them, helping them get justice.” Actor Ahsan Khan who is a brand ambassador for the Child Protection and Welfare Bureau Punjab observes, “A lot of times people truly do intend to support a cause and I stand by my fraternity and feel proud that they are raising their voices against crimes. It is important that each and every one of us wakes up and talks about rights and wrongs. But there also needs to be a certain sympathy and empathy when we address an issue as sensitive as rape or harassment. Pain cannot be given to victims while talking to them or their families.”

“I took on the role of a child molester in the drama ‘Udaari’ and it was the sort of story that gave people a reality check regarding the crimes that exist around us,” says Ahsan. “But afterwards, I was offered similar scripts that I refused. I didn’t want to sensationalize the cause, I wanted to stand by it. We have to be sensible when giving a message and supporting a cause.” Coming back to Nida Yasir’s apology, she asserted that she would never opt to do a show with the victims of a sexual crime for the sake of ratings. In fact, she clarified that such content doesn’t generate ratings at all, especially compared to shows featuring celebrities and fashion. Nida said that such shows were truly planned out in order to help out victims and their families.

Nevertheless, it is undeniable the news channels do rake in ratings when they dissect the heinous details of a sexual crime. There are plenty of photo ops at a mainstream protest. If the intention is genuine, such efforts will still manage to eventually make a difference. But when recently a bigot like scriptwriter Khalil-ur-Rehman Qamar was called to talk shows to discuss such incidents, apparently being presented as a proponent for feminism, it was quite obvious that the intention wasn’t to highlight women’s rights – the channel was hoping that Khalil sahab would say something offensive, as he is wont to do, and start off a Twitter trend.

An individual’s true intention cannot be guessed. It would be a comforting thought that most celebrities, even though they may fumble, truly mean to extend support when they step up for a cause. To do so merely for ratings, to gain attention, to be elevated as a champion of human rights, to be part of a bandwagon that’s currently in the spotlight – that would just be incredibly shallow and even, inhuman.