Tich Button is feel-good. The trailer implies as much and the movie doesn’t disappoint either. This isn’t the sort of story that will challenge your intellect, embroil you emotionally or leave you in suspense. Instead, it will sweep you with a heady mix of song, dance, color and good ol’ fashioned Punjabi humor. You will laugh, you’ll tap your feet to the songs and you’ll be inclined towards shrugging away the few flaws that rear their heads now and again. It’s just that you’d rather enjoy the story than dwell over certain nitty-gritties that could have had been ironed out.

Our hero is Kaka Sahab, aka Farhan Saeed, a happy-go-lucky, good at heart, bona fide Punjabi munda who lives in the very colorful Noor Haveli with a motley crew of relatives: his uncle and aunt, enacted by the brilliant Sohail Ahmed and Gul-e-Rana, his grandparents, played by Qavi Khan and Raheela Agha and Samiya Mumtaz as his widowed mother who constantly frets over his lack of ambition and compares him to his much more successful cousin Saqib. Saqib, played by Feroze Khan, works in Turkey and has befriended a drop-dead gorgeous half desi girl called Leena, aka Iman Ali. There’s also a phuppo, played by Humaira Ali, and a phuppa- Noor ul Hassan in a small role – and their daughter Shakila, aka Sonya Hussyn, who keep turning up at their home. There are even cows tied up right outside the house, who only give milk when Kaka Sahab dances for them to fast Punjabi numbers!

We are let into this garrulous, wisecracking household at a point at which Saqib and Shakila’s nuptials are being decided. The two are engaged but while Shakila is eager for the wedding, Saqib no longer wants to marry a village ‘paindu’. Roaming through Istanbul’s scenic locales, he discusses this with Leena and Kaka Sahab comes to his friend’s rescue by devising a story that convinces Shakila that Saqib is gay.

Since she can’t break off the engagement upfront, Shakila concocts a fake love letter and makes sure that it falls into the hands of the family elders. The letter implies that she and Kaka are in love. The engagement with Saqib is duly broken off and a wedding date gets fixed for Kaka and Shakila’s wedding. Kaka is appalled at first but seeing how happy his mother is – Shakila will be bringing a prodigious dowry with her – he warms to the idea. In the meantime, Saqib leads his mother, who is distraught by the broken engagement, into believing that he is in love with a foreign woman. The notion of a ‘gori bahu’ excites her and she brags about this to the entire family with great pride. Saqib, due to return home to attend Shakila and Kaka’s wedding, convinces Leena to accompany him, pretending to be his ‘gori’ girlfriend.

The plot thickens when Saqib returns home and falls for Shakila. Predictably, Kaka and Leena get closer and there’s love in the air. Shakila, on discovering that Saqib is not a ‘meetha’ (the not-very-politically-correct word used to describe a gay man in the movie), suspects that something fishy is going about. There’s song, dance and hilarity in the household as it gears up for the wedding; the daadi getting accidentally drunk, Shakila insulting Leena in Punjabi only to find out that Leena has been able to understand her all along and a filmy mela sequence right outta Bollywood.

The ensemble cast is exceptional. Gul-e-Rana draws laughs as she tries to converse with her ‘gori bahu’ and later gets dismayed on discovering that Leena is, in fact, entirely desi. Sohail Ahmed has some heartwarming scenes as Saqib’s father and Kaka’s uncle. It’s great to see Samiya Mumtaz in a lighthearted role rather than the usual heavy duty characters that are her forte. Her role is limited but she is memorable as the sarcastic mother, fretting over her son’s uselessness and constantly chiding him. One wishes to have had seen an actor of Qavi Khan’s stature in a more nuanced role rather than as the stereotypical daada who could have had been enacted by any actor. Marina Khan, similarly, is forgettable as Leena’s mother although she does look great.

The main cast is certainly very good-looking. Iman Ali is stunning although her acting could have been better. Sonya Hussyn is a firecracker as Shakila, making you smile as she lashes out at Kaka and Leena and schemes in order to find her way out of not getting married. Feroze couldn’t have looked better and acts very well, adopting a very believable Punjabi accent.

It has to be mentioned, though, that Sonya and Feroze both are hardly the main leads in the movie. They have well-developed side roles but there are long spates where their characters entirely disappear from the plot. In the seconld half, particularly, it is odd that Saqib and Shakila are set aside and forgotten for quite some time. This is unfortunate, given that both actors’ characters are very interesting. Better focus on them would have had only made the narrative more well-rounded. 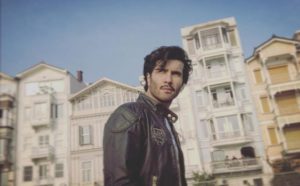 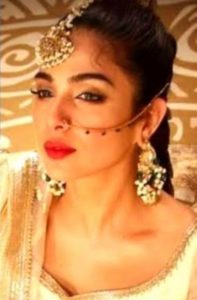 On a side-note, one wonders if Sonya and Feroze’s absence from Tich Button’s promotions had something to do with their limited roles in the movie. Or had the actors been difficult with the producers and refused to shoot for longer? One has heard that a song featuring Feroze couldn’t be shot because the actor was not available. And the delightful ‘Mein nai boldi’, where Sonya dances at her wedding, seems to have been cut short in parts. The song breaks off midway, continuing on much later. It seems disjointed. Could this be because the actress didn’t want to shoot anymore? Regardless, the limited screen time given to Saqib and Shakila is evident.

Ultimately, this movie is about Kaka and Leena’s romance and the acting accolades in this case can be particularly showered upon Farhan Saeed. High from the success of his drama, ‘Mere Humsafar’ – one of this year’s biggest TV hits – Farhan shines as he the befuddled, well-meaning Kaka. Farhan’s popularity is undeniable and yet there’s no braggadocio to his role. He slips into the skin of the naive, often bullied Kaka, shrugging aside Farhan Saeed the star.

The music, also, is one of the movie’s strongest points. From the introductory Jutt Song by Mika Singh to the saucy Pretty Face item number to the catchy Mein Nai Boldi to – my favorite – the romantic dream sequence spun out by Ehsaan Hai Tumhara, the music is an all-out hit. If one had to make a criticism, it would have to be on producer Urwa Hocane’s appearance in Pretty Face. Urwa looks beautiful but isn’t able to master the jhatkas and the sultry glamor necessary for a song of this genre. Then again, perhaps the makers felt that it was necessary to include a song featuring Urwa with Farhan Saeed – a long-time favorite celebrity couple – to draw the audience.

The movie is Urwa Hocane and Farhan Saeed’s first venture as producers, along with ARY Films. Judging from the positive box office reports, they have done well for themselves and will possibly delve into cinema yet again. The feel-good factor which propels Tich Button could very well become a signature for these actors turned producers. It’s a formula which many other local movies have tried their hands at but most, unlike Tich Button, have failed.

This is also director Qasim Ali Mureed and writer Faiza Iftikhar’s cinematic debut. Of course, both are hardly amateurs in their fields. Qasim only recently wrapped up the earlier mentioned mega-hit Mere Humsafar and his next drama as a director, Meri Shehzadi is currently on air. Faiza is no stranger to scriptwriting and has countless successful TV scripts to her credit. Cinema, of course, is a different ball game and as first-timers, both Qasim and Faiza do well.

Qasim’s work stands out in the way he makes his story larger than life with some beautiful shots that celebrate the spirit and scenes of Punjab. There are points where the camera goes blurry – one wonders why –  but generally, Qasim moves the pace along in Tich Button very well. Now that his very first effort has been received well, one expects to see him try his hand more often in the cinematic playing field. This is good – we definitely need more filmmakers to enter the fray.

Faiza’s expertise is evident in the playful banter between the characters and the delightful mix of romance, friendship and familial loyalty that forms the movie’s focal points. The dialogues are particularly regaling and are the highlight of the movie, even more so than the plot itself. As for the plot, Faiza falters in writing one which is watertight. If the titular Tich Button refers to Kaka and Saqib’s friendship, then why is this bond barely evident in the movie? How was Saqib not aware of what Shakila looked like until he saw her on returning home and decided that he wanted to marry her after all? Throughout the movie, the characters are shown communicating with each other via video-calls. How did Saqib not manage to get ahold of a picture of Shakila,  who is his first cousin after all? Also, at the risk of sounding repetitive, where do Saqib and Shakila disappear off to in a large part of the second half?

While we’re still talking about the second half, it could have had been shortened by 15 minutes at least but even so, the movie never bores you. The actors look so good as do the locales and the music is so hummable that you stay till the very end.

And when it ends with Farhan Saeed and Canadian singer Jonita Gandhi singing Ehsaan Hai Tumhara, you clap and you smile. You happily overlook the flaws because for nearly two and a half hours, you left aside your worries and escaped into a breezy, colorful world where people fall in love in make-believe melas and sing beautiful songs. That’s just the sort of movie Tich Button is.