The cricket field, a team of young boys, ego games, friendship, romance and witticisms peppered through the story. The makers of Baarwan Khiladi, right before the series released this past weekend, prophesied that this could mark the onset of indigenous OTT platforms in Pakistan.

They predicted well – because this one’s a sixer. The series is fast-paced, the direction is slick, the plot is gripping and the cast has an endearing youthful energy. This is the story of a team of young professional cricketers and their cantankerous not-very-trustworthy coach. It’s a story about the eternal struggle between true merit and financial clout, good and bad, rivalries and the importance of team work. And all this can be surmised from watching the series’ first two episodes, which were streamed out on online platform Tapmad Entertainment a few days ago. 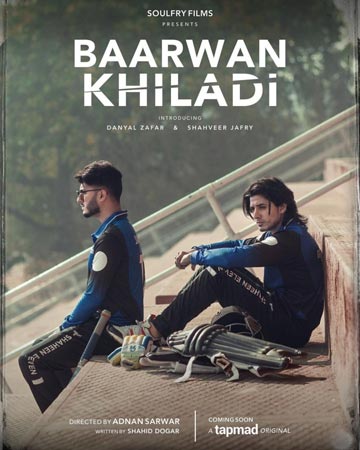 Tapmad, still in its fledgling stages, decided to make the first two episodes available for watching for free and it seems to have had been a well-calculated move. Once you start watching Baarwan Khiladi, you really don’t want to stop.

The coveted ‘Shaheen 11’ professional cricket team is in need of a new cricketer and a number of players come to the trials to test their luck. Being part of this team is considered a huge benchmark by young cricketers since it often leads up to full-blown careers as part of the national team. Our hero, Akbar, is a star cricketer in his mohalla and he does extremely well in the trials. When he gets a call saying that he has been included in the team, he assumes that he is going to be the 11th player in the main team. Instead, he is relegated to a substitute as the ‘baarwan khiladi’, the main spot going to Jehangir who hadn’t come to the trials but had a wealthy father who had made a few requisite calls to the coach.

Running through this main storyline are a number of sub-plots: the rivalry between the boys with Jehangir and Akbar lashing out at each other frequently, the coach refusing to pay one of the boys, the sweet romance between Akbar and his friend’s sister Aliya, Akbar’s bond with his mother and the team’s financier intent on winning and declaring that by no means should there be foul play in the team. The story moves smoothly from Lahore’s androon mohalla to the cricket field and the boys talk in lilting Lahori accents. The Badshahi Mosque forms the backdrop to Akbar’s home and an upbeat, foot-tapping soundtrack builds up excitement in the cricket field.

Director Adnan Sarwar’s skill is very visible – the story grabs your attention and keeps you riveted. The cast of young actors is also very promising. Khaqan Shahnawaz delivers his one-liners well. Meer Yousuf is the dedicated young cricketer. Shahveer Jafry is completely at ease as the arrogant Jehangir and speaks smoothly. His many years as a YouTube sensation have evidently come in handy here. Daniyal Zafar, playing the hero, is refreshing and instantly likeable. Hair disheveled, shoes torn, he’s the classic son o’ the soil, the hero who has humble beginnings but who dares to dream big. The young actor has great screen presence, smiling  as easily as he spews a few select curses at his enemy. Kinza Hashmi is sweet as the quick-tempered girl next door with a soft spot for Akbar.

The entire cast, in fact, is like a breath of fresh air. These are young boys, new to acting – except for Daniyal to some extent – but very familiar with the camera in their capacity as online content creators. They know how to walk the walk and talk the talk and don’t strike you as fumbling debutants. A few more years and a few more interesting roles, and this contingent of young on-screen cricketers could be TV’s next generation of stars.

Holding his own among the newbies is seasoned veteran Sarmad Khoosat. He frowns, chews paan and throws a few threats around as the all-powerful coach of the team. It’s a mature, restrained, impressive performance.

Barwaan Khiladi is the sort of series that you’ll want to binge-watch – in fact, it’s a pity that the makers have decided to release two episodes every weekend. Mahira Khan and Nina Kashif, with their maiden production venture Soul Fry Films, chose well when they put their faith in these khiladis. They did well when they opted for Adnan Sarwar to hold the fort. They made the right decision when they decided to roll out the series out on an OTT platform rather than opt for TV.