Deep within Pakistan’s rugged Northern mountains, a short distance from the town of Balakot, a star-studded crew gathered in the valley of Bhogarmang. Some of the scenes had already been shot in Islamabad while others were also shot in Dadar near Mansehra. The cast and crew of the Hum  settled down for several weeks of The shoot for HUM TV Network’s upcoming Sang-e-Mah began in the cool summer season and proceeded on till the harsh, freezing winter.

The teasers of the drama, the first episode of which premieres on TV as well as in cinemas this weekend, show glimpses of the scenic beauty of the shooting locale; a bridge running across a fast-flowing river and a lush green valley across the backdrop of the mountains. The drama’s star cast is equally appealing. In the continuation of his past hit Sang-e-Mar-Mar, director Saife Hassan is pulling the punches with an ensemble that includes Naumaan Ijaz, Sania Saeed, Omair Rana, Samiya Mumtaz, Kubra Khan, Hania Aamir, Zaviyar Naumaan Ijaz and singer Atif Aslam in his TV debut.

“I am one of the Aadeez now!” – director Saife Hassan 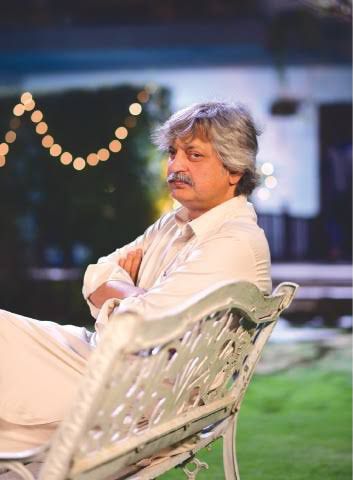 The first thought that struck me on seeing the teasers was how did the director manage to draw in such an extensive motley crew of actors to a rustic, far-off locale? “It had to be a location like this,” explains Saife. “The drama follows a tribal storyline and while there may have been some difficulties, none of my cast ever placed any pressure on me. The guest house that we stayed in hadn’t ever been used before and was midway through construction when we opted to stay in it. We had to quickly get the construction wrapped up and arrange for basic necessities like having a cook on the location. It was difficult but it had to be done.”

Sang-e-Mah is a continuation of the precedent set by the earlier Sang-e-Mar-Mar but Saife stresses that the drama is not a sequel. “It is a completely new story with a completely new set of characters,” he says, “but the tribal setting is the same and some of the actors from the previous drama are also in this one, such as Naumaan Ijaz, Saania Saeed and Kubra Khan.”

I pose a rhetorical query: When Saife opted to include Atif Aslam in the cast, he must have expected the drama’s hype to magnify. “Yes, but not to this extent! People have been messaging me constantly ever since we started releasing the teasers. I have gotten queries not just from Pakistan but also from India and Bangladesh. I have even been added to groups on social media that have been created by Atif’s fans.”

The Aadeez? “Yes! I am one of them now!” laughs the director. 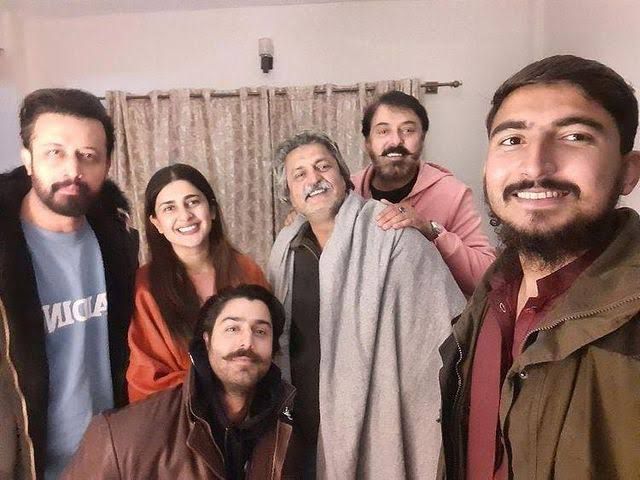 “Acting as Hilmand placed the pressure on me but I like accepting challenges.” – Atif Aslam 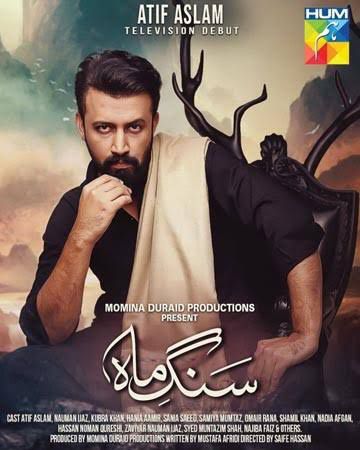 For Atif Aslam, the hype is testament to his star-power and the love of his fans. However, it does bring the pressure on him. Talking about his role in Sang-e-Mah, Atif observes, “The fact that people don’t expect a mistake from me is very intimidating. Acting as Hilmand was certainly something new for me but that didn’t mean that I should stop taking risks or accepting challenges.”

Discussing the acting process, he says, “It was amazing to step into another character and learn so many new things. Memorizing Hilmand was a role and a half in itself. It was difficult for me to unlearn Atif Aslam and become this new person. I am hoping that the audience likes Sang-e-Mah. Fingers crossed!”

“With Saife Hassan as director and Mustafa Afridi writing the script, an actor is in safe hands.” – Sania Saeed 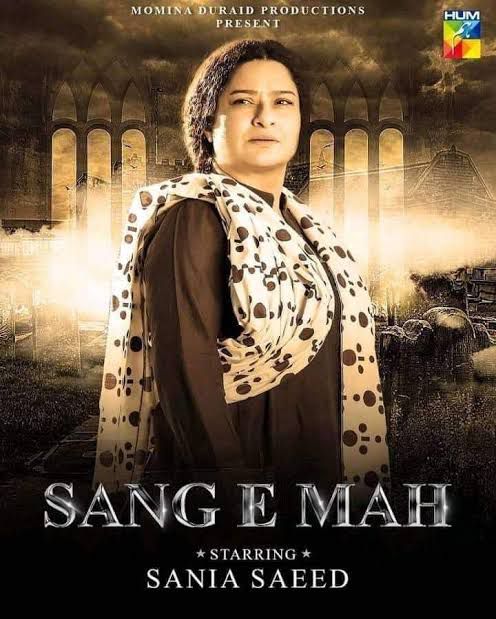 How did the veterans on set feel about having one of the country’s most powerful rockstars suddenly take a turn towards acting and share screen space with them? This is a question that I pose to Sania Saeed, one of Pakistan’s most powerful actresses. “I think it was a brave move made by Atif and I saw him working very hard,” she says. “He knew that was he in strange territory and in the company of seasoned veterans and he was very focused. I think that it was always promising to see new blood enter the field. There are roles for everyone. An older actor can’t do the role of a younger character. There is a space for everyone to make his or her mark.””

She continues, “Saife is also an actor which I feel aids him when he is directing. He knows exactly how he wants the scene to be. I used to tease him that he would never say ‘Shabash!’ to me after a scene was shot but he would say it to Atif! He would joke back that I could act as soon as I woke up from sleep while this was Atif’s first time,” she laughs.

Saife Hassan and Sania, of course, go back a long way, from their theatrical trysts to working for TV together. Sang-e-Mah’s writer, Mustafa Afridi, has also been a long-time part of their ‘gang’. “I just have an inherent bias towards Mustafa’s writing because I have worked with his scripts before,” says Sania. “When there’s Mustafa writing the script and Saife behind the camera, I feel very comfortable. With a team like that, I know that the story will be told with integrity and in a creatively inspiring way.” The rest of the Sang-e-Mah team also got on well. “The younger actors would be playing badminton through the night. Kubra is such a genuine person and I worked with Hania Aamir for the first time and she was lovely. She’d cook for us and play board games! The guest house that we were staying at had a very varied garden and everyone was waiting for Samiya Mumtaz to come because she loves greenery. And when she did come, she was overjoyed, telling us the recuperative benefits of each plant,” recalls Sania.

Hopefully, the camaraderie will trickle down to the screen. Focusing on her character, Sania describes, “It’s completely different from the one that I played in Sang-e-Mar Mar. In that drama I was playing an older woman. Now I am playing a younger woman. This drama places focus on the tribal tradition of ‘Ghag’ where a man can choose to marry a woman by force. The scenery around us is veritably a character within the drama and the script has been written with such a deep understanding of the tribal culture and the nuances within it.”

“There is no formula to success.” – Kubra Khan 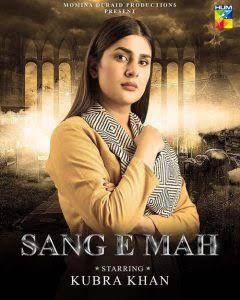 For Kubra Khan, Sang-e-Mah is particularly special because it has reunited her with the team that she worked with in Sang-e-Mar-Mar, which was her very first TV drama. She says, “I knew that working with Atif meant that I would be under scrutiny because I think people expect a lot from him. At the same time, the trouble that I particularly faced was that I was working on three different projects at the same time; so there were times when I was Mahjabeen from Sinf-e-Aahan for a day and then Mashal from Hum Kahan Ke Sachay Thay the next and after that, Shehrzaad. Thankfully, Saife Bhai was very helpful as was Atif, who made it very easy for all of us to work with him. I think the entire cast was so great to work with.”

She continues, “When I acted in Sang-e-Mar-Mar, I had no experience whatsoever and did not know how things worked. By the grace of Allah, Sang-e-Mar-Mar did very well and over time the one thing that I have learnt is that there is no formula to success. Both dramas have standalone stories that are not connected to each other.”

On that very promising note, Sang-e-Mah-Mah gears to make its TV premiere. The first episode will also be premiering on the cinema screen and there’s no denying that it is preceded by a great deal of anticipation. The inclusion of Atif Aslam particularly places the drama in the spotlight, which is both a blessing but also a burden. The drama could become an overnight hit – but it also runs the risk of being criticized rampantly.

Hopefully, yes, they will.