Actress Iqra Aziz announced that she was expecting her first child through a series of Instagram posts on her own and husband Yasir Hussain’s accounts. The images, from Iqra’s ‘god bharai’ ceremony were beautiful. The mom-to-be – one of Pakistan’s most talented actresses – was glowing and felicitations flooded in on social media.

The focus also fell on what Iqra was wearing. Draped over her bright purple peshwaz and gharara was an organza dupatta in the same hue, embroidered with florals and winding Urdu text. Designer Fahad Hussayn, who had created the outfit for Iqra, revealed that she had wanted 100 dua’s to be etched on to the dupatta which she eventually wanted to pass on to her child.

“There was only one dua which had the word ‘Allah’ in it and we made sure that it was at the point which would be draped over the head,” says Fahad Hussayn. “We were very careful with the placement.”

Iqra’s bespoke, personalized dupatta has inspired clients to approach Fahad for similar designs. “We’re working on some really cool customized orders,” says Fahad. “Right now, we’re creating a dupatta that three siblings have ordered for their mother. It has messages from them to her in embroidered text, and they will be presenting it to her on the wedding of one of the siblings. There’s another dupatta that a mother-in-law has ordered for her future daughter-in-law.” 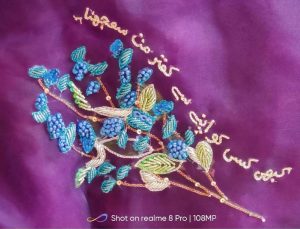 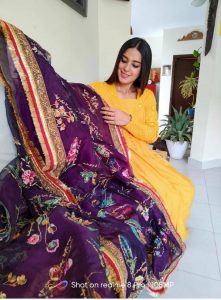 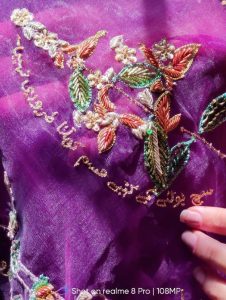 A few months prior to Iqra’s elaborate god bharai dupatta, another customized design had made waves. For her engagement ceremony, Bakhtawar Bhutto Zardari, daughter of the deceased Benazir Bhutto, had chosen to wear a design by Nida Azwer. Her simple tea pink outfit was draped by an exquisite hand-embellished shawl which bore Nida’s very decipherable signature. But while Nida Azwer’s shawls are quintessentially hand-embroidered with Mughal miniatures, this particular shawl held details that were much more distinctive.

In a series of images, the shawl narrated pictorial stories from Bakhtawar’s life. One pallu was etched with images from her past; her parents’ wedding day, childhood games with her siblings, a study from her home and even McDonald’s fries and nuggets, a favorite meal from the past! At the other end of the dupatta, the second pallu captured Bakhtawar’s present and future: the way her fiancé had proposed to her, her home, her garden and her pet dogs.

Talking about the creation of the shawl, Nida had mentioned referring to images provided to her by Bakhtawar which she then sketched before translating them to thread and embroidery.

“This isn’t the first time that I have created a shawl with customized images for a client,” says the designer. 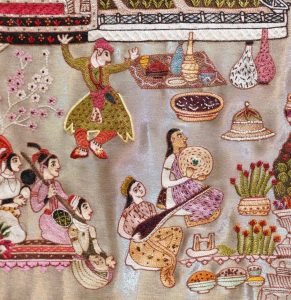 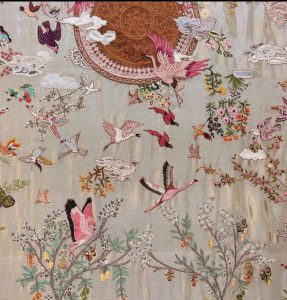 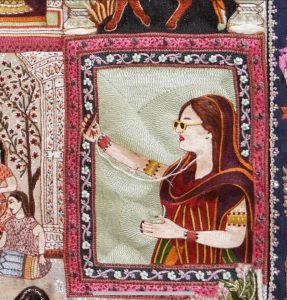 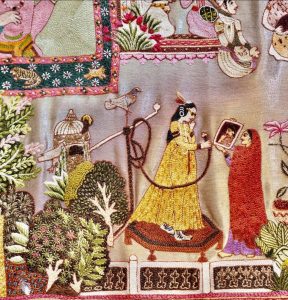 A personalized bespoke shawl, or a dupatta like the one created by Fahad, can only be ordered at a considerable cost. But with weddings sized down due to the coronavirus, budgets are increasingly focused towards the purchase of just one bespoke couture design – rather than several, to wear to the many days encompassing the pre-Covid big fat Pakistani wedding. A bride-to-be may take her time deciding on how she wants this single outfit – or perhaps, two – should be. She may choose to invest in a heavy duty design by a designer that she has always wanted to wear. And if she has the budget, she may want to make the outfit her own with customized text.

“This is how couture is meant to be, isn’t it?” points out Fahad Hussayn. “It isn’t meant to be fast fashion, abiding by ongoing trends. It is painstakingly created, very detailed, and it is meant to be cherished forever rather than given away after a few years. It needs to be something that you want to pass on to your children someday.”

A couture creation, embroidered with personalized text, would certainly be worth treasuring. It is interesting to note that in both Iqra and Bakhtawar’s case, the bespoke elements were added in on the shawl or dupatta rather than on the trouser or the shirt. While the wearer’s weight may change and varying fashion trends may make the rest of the outfit look outdated, a dupatta is a keepsake that will always be a part of Pakistan’s sartorial landscape. “I just wanted to create the outfit for Iqra,” says Faiza, “but clients do sometimes ask for customized text. Sometimes, they’ll want the names of the bride and groom on the clothes or the dates of their children’s birthdays.”

There are many more options available on the Internet, offering text to be customized on apparel. Usually, though, this text tends to follow the ‘Papa ki Pari’ thought-stream.

But meaningful text and images, created in collaboration with a designer, are special. At a time when instant gratification through flashy trends has lost its allure, a single customized design created with thought, time and effort can be a precious, timeless statement. Couture, in its truest sense.