Take for instance, the trend that surfaced some years ago of lawn shoots in international locales. Khadijah Shah’s Elan entourage trooped off to exotic corners of the world to add a shiny, global feel to the brand’s annual luxe lawn line. The concept was glamorous, raising lawn beyond generic evening-wear to a statement that could work anywhere in the world. Multitudes of lawn brands were entranced and lo and behold, umpteen collections began to be shot internationally. It was expensive, required plenty of effort but despite this, it quickly lost impact, becoming repetitive.

Similarly, the latest ‘trend’ that may just have the industry in its hold is of wedding-wear shot in an exuberant ‘shaadi’ setting, preferably with lots of young people milling about, dancing and being parts of rasms. Indian designer Abhinav Mishra’s recent campaign, shot in Lahore, featured crowds of young people dancing and having a rollicking time at a make-believe shaadi.

More recently, designer Farah Talib Aziz planned out a gorgeous wedding garden party with models and stars dressed in a whirl of bling, all for a massive fashion campaign. ‘It’ musician Hassan Raheem was amongst the wedding guests, singing while the rest of the make-believe guests tapped their feast. A veritable Insta-fantasy.

So far, so good. But chances are, we’ll see lots more wedding parties in the coming days, some beautiful ones and many others that will unabashedly plagiarize past campaigns. Boring.

Similarly, sartorial details get followed to the hilt. The peplum is one such trend that is better off gone, forever. There’s also the organza dupatta with ruffled borders, which looked pretty when it first came through and now just makes one yawn.

In that vein, here are five trends in the local fashion industry that need to die down immediately, ranging from designs that have run their course to styling techniques to campaign ideas that just keep playing on repeat.

Shehla Chatoor’s solo show in 2018, ‘Noor-e-Alaleh’ featured model Mehreen Syed as the showstopper for the finale, walking out with a heavy trail sliding behind her, a complicated structure made out of tulle, ribbon, fabric and feathers. Mehreen confessed later that the trail actually weighed more than she did. It was a design created for drama, wrapping up the designer’s grand solo outing. A similar, but less heavy, less extensive, trail could be recreated for customers on order. Back when trails still managed to create drama, one whopping long trail worn by Mehreen Syed for designer Shehla Chatoor

A year earlier, in 2017, Sana Safinaz’s solo collection at Fashion Pakistan Week, ‘Roses and Rue’ featured ‘farshi’ lehngas in pastel shades, trails constructed out of wispy, embellished swathes of fabric. Model Alizeh Gabol wore one of the heavier designs, an off shoulder shirt, structured into a peplum at the front of the hem and extending into a long trail at the back. 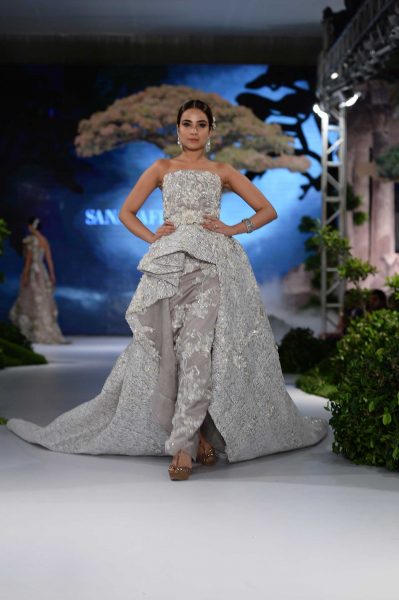 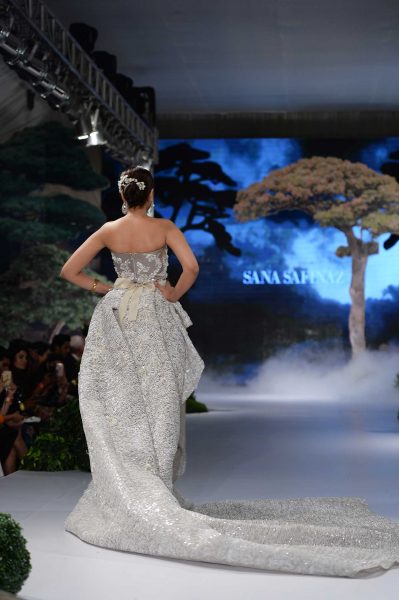 Alizeh Gabol for Sana Safinaz in 2017

But then, every brand under the sun got smitten by the trail. The farshi lehnga and gharara have, of course, always been part of traditional bridal-wear but most trails in designer collections followed slightly more modern lines. They would be in pastel shades, worked with smatterings of sequins and so ubiquitous that you couldn’t tell one designer’s creation from the other. 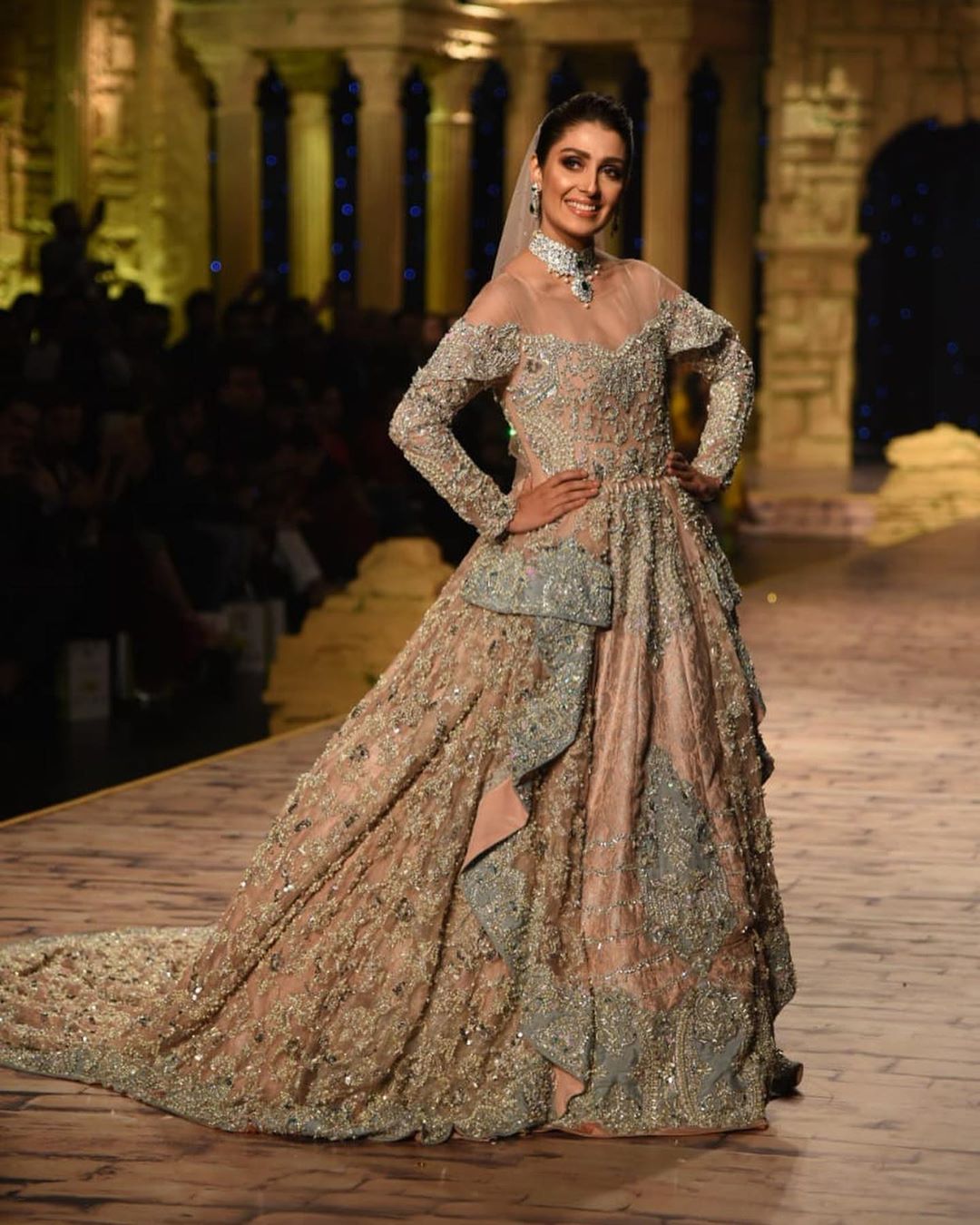 It didn’t matter that most models would be unable to tug the heavy fabric trudging behind them, ruining the overall impact of a fashion show. It also did not matter that beads would be clattering off the trail, right on to the catwalk. This was the new ‘trend’, per se. Now, it needs to go.

It is boring. And untidy. By all means, if customers like the modern take on farshi bridal-wear then designers can make them regular features of their collections. However, could it not be put forward as a new ‘trend’ on catwalks and campaigns?

The can-can is a miraculous little creation that adds flounce and structure to a skirt – or in Pakistan, to a lehnga. The Parisian bourgeois wore can-cans under their skirts in the Victorian era. Judy Garland would twirl in fabulously can-canned skirts when she would dance with Gene Kelly in the Hollywood musicals of yore.

And in Pakistan, designer Nomi Ansari fits the perfect can-can under a lehnga, mastering just the right amount of flare, with the fabric flying out prettily when a model twirls on the catwalk.

Elsewhere on the desi catwalk, the can-can loses its magic. Instead, it becomes a lugubrious faux pas, with the white organza and tulle peeping out from under the lehnga. Evidently, most desi ateliers don’t know that just like the slip beneath the shirt shouldn’t be peeping from the neckline, the white flounce of the can-can isn’t supposed to show and has to be cut extremely neatly. 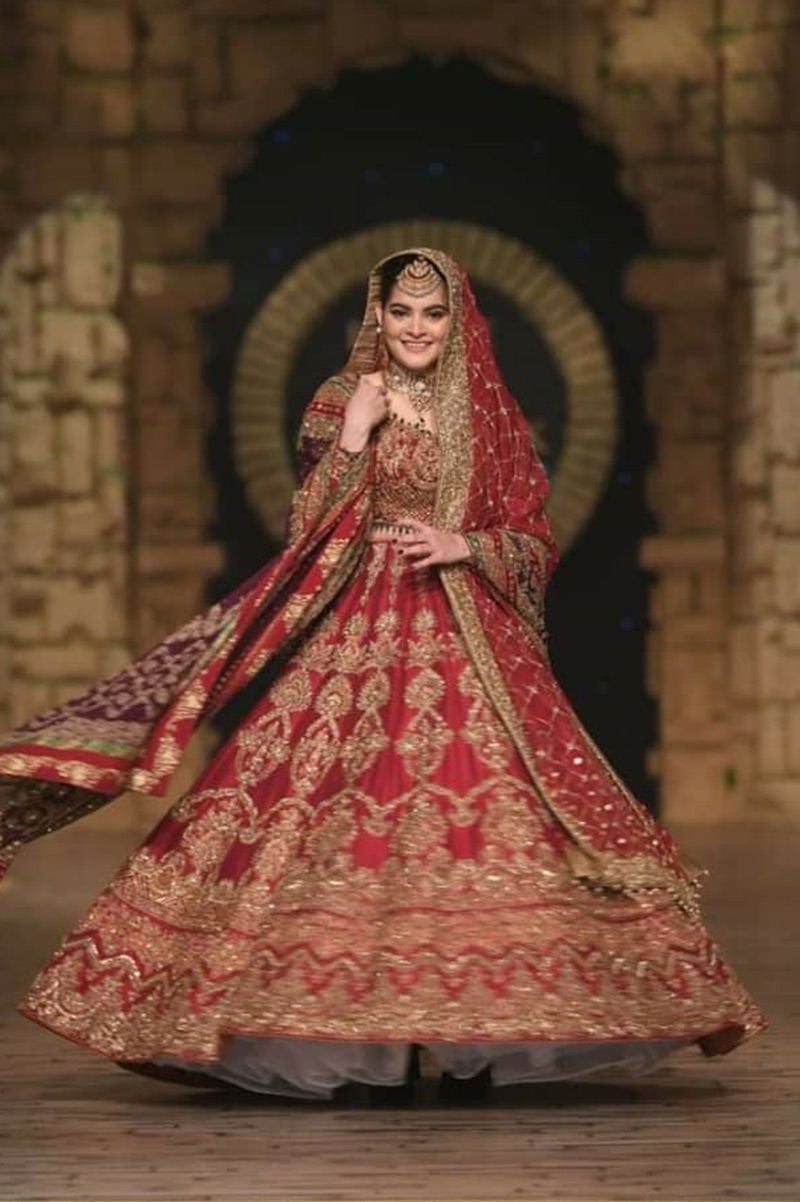 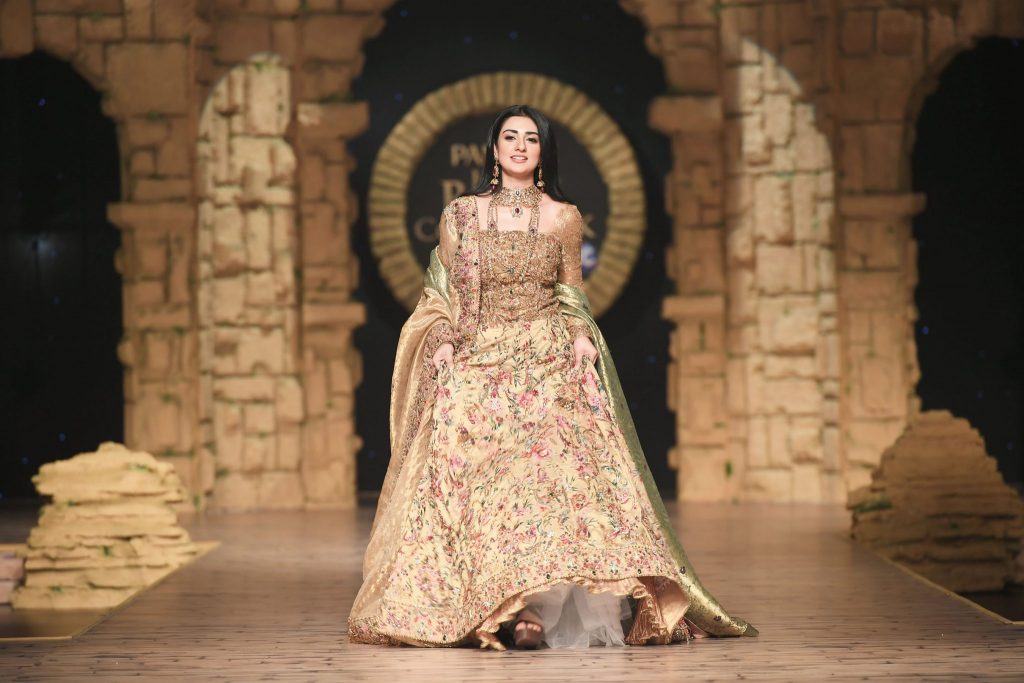 Here’s a tip: the can-can can be bordered with a blingy ribbon or gota so that even if it peeps out from beneath a lehnga, the white doesn’t show.

Earlier this year, in fact, at Fashion Pakistan Week, one fashion show actually featured long lengths of the can-can streaming below the skirt, in a sort of fashion statement. 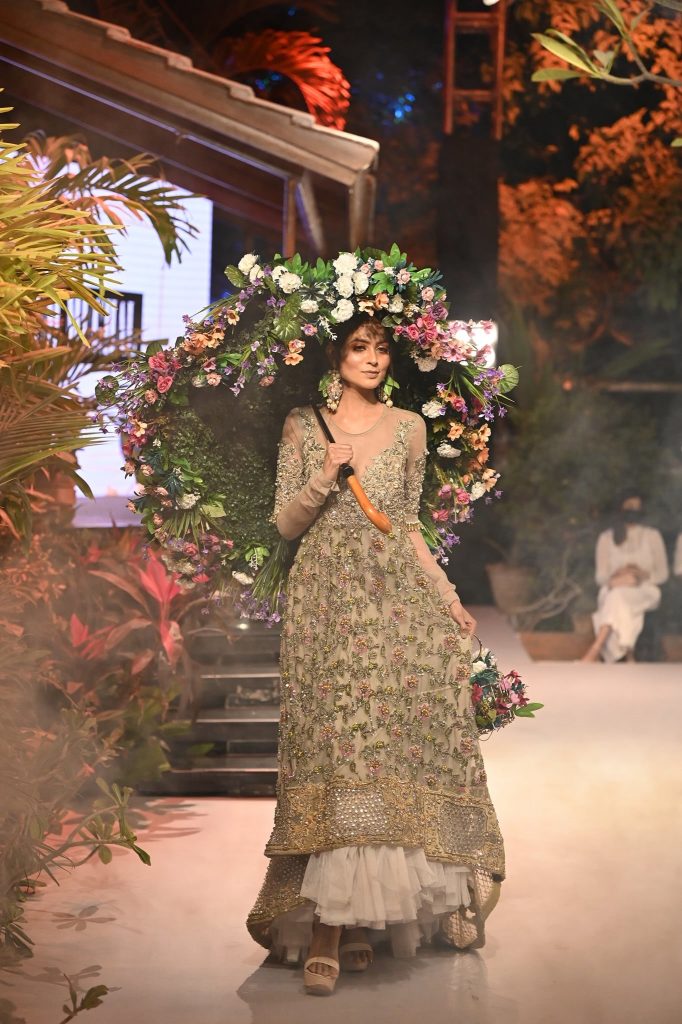 But it wasn’t a good statement. And if a designer can’t fix a can-can properly, it’s better to do without it.

Sunglasses are perennial fashion statements, used frequently on catwalks and in campaigns to add a touch of glamor to the imagery. In Pakistan, lawn brand Sana Safinaz sought to uplift unstitched fabric by adding funky sunshades in the mix. In 2016, sunglasses featured in the campaign for Sana Safinaz Muzlin, a more affordable range that has now become a staple within the brand. The models wore colorful sunshades, complemented by chunky accessories and funky hairstyles. It was very cool, young, funky. Later that year, sunglasses were also the accessories du jour in the Sana Safinaz Fall/Winter ready-to-wear collection shoot. 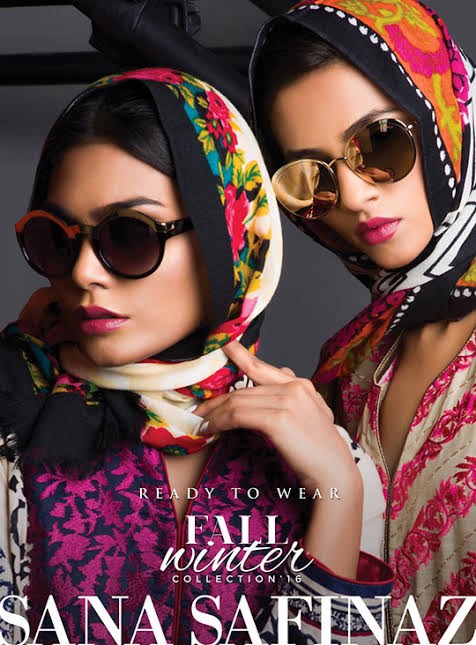 On catwalks and in shoots for every season, sunglasses have played a major role in adding oomph to a Sana Safinaz campaign, particularly snazzing up unstitched lawn, a fabric which may be hugely popular but which often falls victim to being same-looking across myriad collections.

Many other unstitched fabric brands also immediately got the same bright idea and now one sees sunshades in every second campaign. It’s evidently too tedious to come up with new ideas of one’s own.

Much has been said about the ‘goan’ – often by me. Much more can be said.

The ‘goan’ is the desi take on the gown. It is supposedly a ball-gown a la the Oscars, stitched impeccably and extremely sophisticated. In reality, usually the Pakistani ‘goan’ is just a long, blingy kameez made to look like a dress. You could add a shalwar to it and it could be Eid-wear. Slip off the shalwar and lo and behold, you’re all set for (Hum/Lux) awards night!

Only very few designers can truly stitch a slinky, bona fide glamorous gown – I can count them on one hand.

But then again, what’s the need to wear a gown? The Pakistani body type isn’t usually suited to figure-hugging numbers and besides, women accustomed to wearing shalwar kameez most of the time usually can’t just slip into a gown and manage to look comfortable. 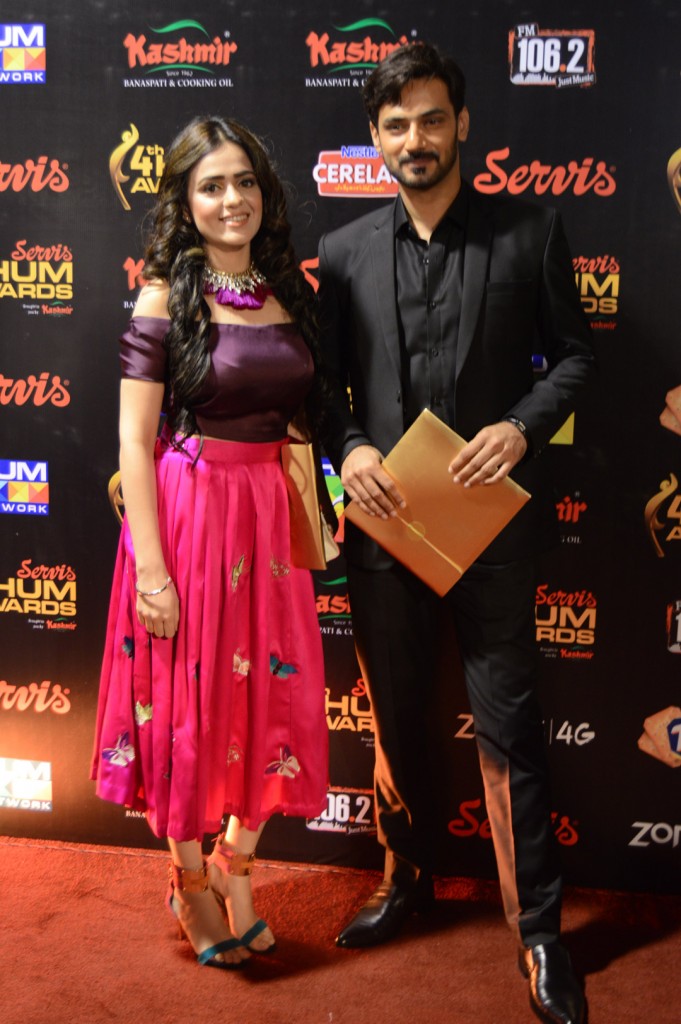 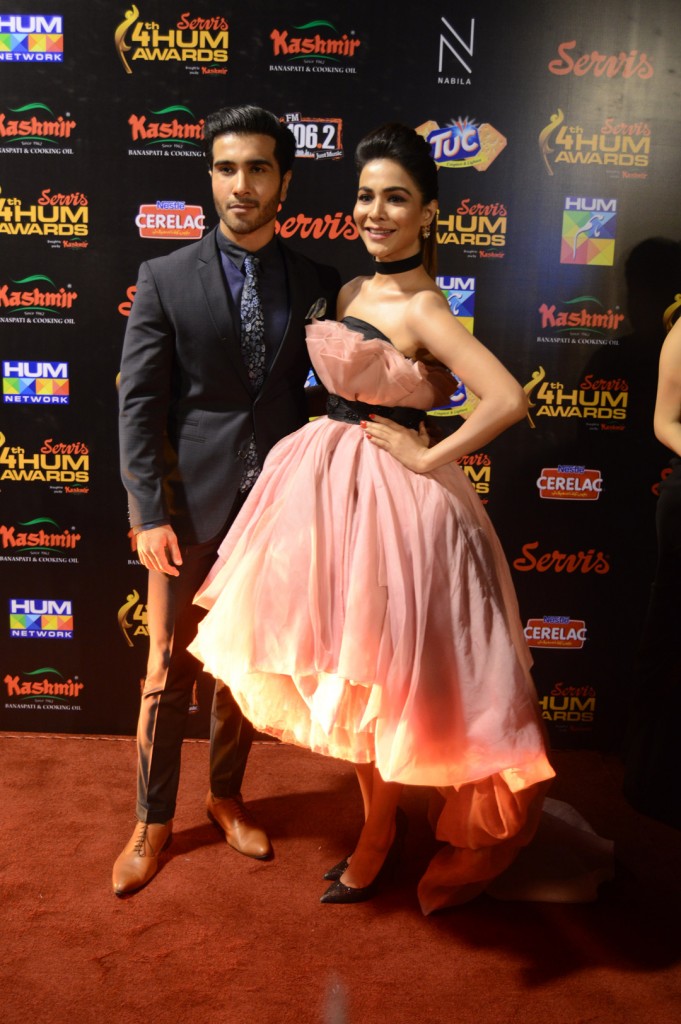 ‘Goans’ and ‘fracks’ – not always the best way to bring on red carpet glamor!

The anglicized Western-wear can be set aside for the erstwhile sari or sophisticated takes on the sherwani. Sometimes, the main reason why a gown doesn’t work on the Pakistani red carpet is that the star wearing it just isn’t at ease.

The lehnga-choli is subcontinental and is a consistent part of bridal-wear in both India and Pakistan. It’s also no secret that major Pakistani design houses do have some Indian clientele and vice versa. The similarities in design also mean that we enjoy looking at Indian catwalks and have particular fashion favorites across the border.

This appreciation, however, cannot be allowed to translate into campaigns that look like they are straight out of Delhi. The bindi and the sindoor are an inherent part of the Indian culture and when a Pakistani designer adds it to his or her collection, it just looks very, very inspired. 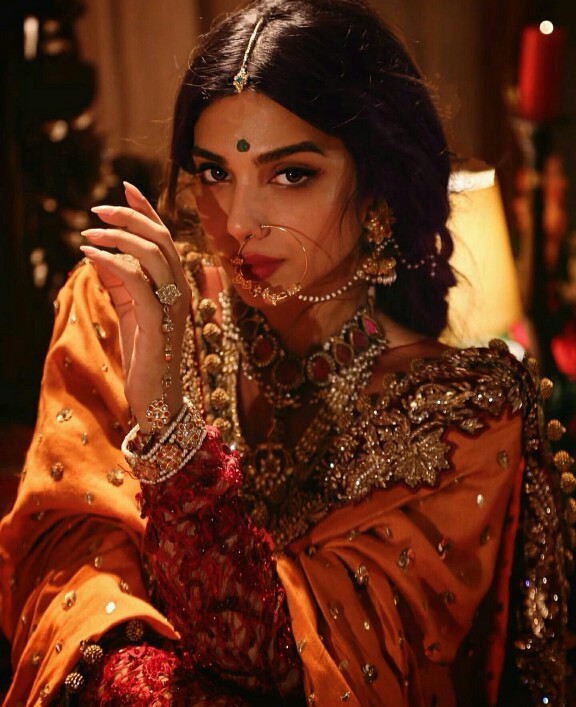 There’s also no need to replicate cross-border inspirations to the tee, copying a Bollywood film scene and being proud of it or getting smitten by the wide necklines created by an Indian design heavyweight and following it up with similar designs merely a few weeks later. .

There are a wealth of cultural statements that are more Pakistani; elaborate jewelry like the jhoomar and the teeka and our own classic movies, songs and dramas. Similarly, there are colors and embellishment patterns unique to Pakistan, should a designer want to switch off from zooming in on Indian catwalks and make an effort to be original.

The Indian touch is far too prevalent. And while we all love Bollywood and enjoy looking at the work of certain Indian designers, some of Pakistan’s fashion fraternity tend to go a bit too far with the inspiration.

It’s plagiarism, for one. Also, it’s hardly impactful. And it’s not like it’s anything new. If we want to see how a lehnga of that particular hue looks in that particular setting, accessorized with a deep red sindoor, we’ll just check out Indian designers on Instagram.

The MNR flavor comes to Karachi!