Kamli wanders through winding paths on musty hillsides, she zigzags through ancient trees with wizened trunks, she spreads her hands in abandon on the peak of a hill and submerges herself in the deep waters of a gushing river, seeking the peace and companionship that evades her persistently. She also lives within a home, where she blindly grinds chutney in a mortar, vigilantly padlocks bits of her life away in chests hidden away in dark corners, paints listlessly on a canvas and wallows in a blur induced by alcohol and an unrelenting sadness. There is a deep, dark melancholy in her eyes, a repressed longing in her wistful smile, an enduring pain in her silence and an anger that bursts out sporadically with the violence of a volcano.

And you lose yourself in this story of despair and hope, of loss and desire, of an anguish that never quite goes away, suffocating, making one mad, a Kamli.

Sarmad Khoosat’s directorial venture is a hypnotic tale that draws you in and keeps you transfixed, so gripping that you sometimes hold your breath, you shed a few tears, you wring your hands. Kamli is harrowing and thought-provoking and simply put, magnificent.

The movie’s brilliance lies in the many nuances expertly knit together to form the story. There’s Khoosat’s exceptional direction and the stellar camera-work, with every frame resembling a work of art. The attention to detail plays an important role in the storytelling, traversing the grassy, rustic landscape of interior Punjab and the homes and lives of the people that live within it. The musical score is an intrinsic part of the narrative, playing out in the background and very often, taking over in a range of melodies. Saad Sultan has curated a remarkable soundtrack for the movie, with Atif Aslam, Zeb Bangash, Sohail Shahzad and the legendary Reshma, among others, singing songs that will remain memorable.

And then there’s the acting. Saba Qamar is the titular Kamli – but so is Sania Saeed and Nimra Bucha. The story weaves through the deep psychosis of these three women and the pain that is eroding away their lives. Saba Qamar is Hina, a woman whose husband left home eight years ago and is yet to return. She is trapped into continuing to wait for him by her sister-in-law Sakina, played by Sania Saeed, who may be blind but guards Hina with a gimlet eye. Sakina oscillates from a maternal figure to a cruel, vicious guardian who uses religion as her weapon, preaching virtuosity, reminding Hina perpetually of her moral obligation towards her long-lost husband.

Hina and some of her friends from the village model for Zeenat, enacted by Nimra Bucha, an affluent painter who lives in the area. Zeenat is married to Malik Sahab, played by Omair Rana, and her life is plagued by alcoholism and a deep depression entrenched in the belief that her husband no longer loves her. She is unable to paint as passionately as she used to and she has been unable to provide an heir to her husband and it has made her caustic and disconsolate. Malik Sahab tries to convince his wife that he still loves her – Zeenat cannot – will not – believe him. 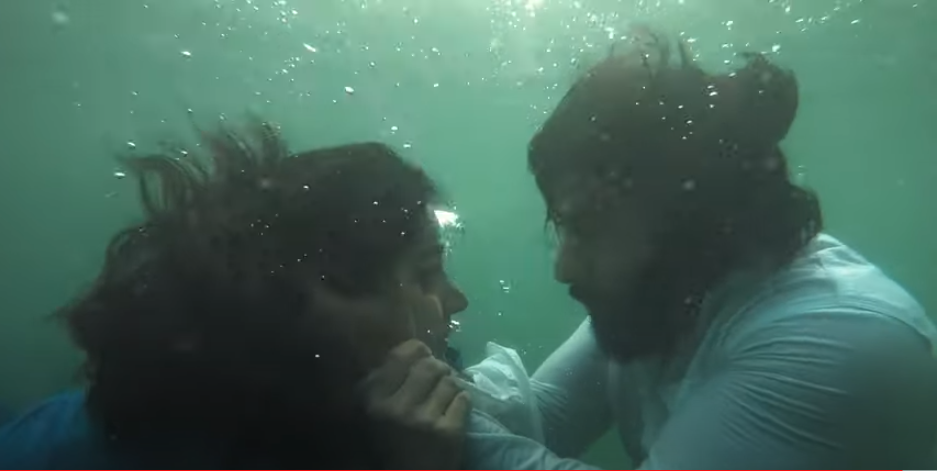 It is on her way back from Zeenat’s home that Hina encounters a mysterious wanderer. Amaltas – bearded, rugged, mysterious – played by debutante Hamza Khawaja, dives after her when she falls in a lake, dragging her out of the water and trapping her with his fiery, forthright gaze. The chemistry between the two is palpable as they prance in the forest imitating a lion capturing its prey or lose themselves in a sensuous mating dance by a campfire in the darkness of the night. Hina is drawn to him even while Sakina gets more suspicious, sniffing at her hair while she sleeps, making insinuations that are veiled threats.

The story in itself is succinct but layers are created within it through the powerful performances, the music and the imagery. Sakina, enraged and saddened, grinds out chutney ferociously on a mortar. Hina is transfixed by a video playing out of a lion catching a deer. A little kitten plays solitarily in Hina’s home, a white peacock peeks out at her from the forest near her home. There is rain, thunder and fire – elements that add to the angst that is an essential part of the narrative. 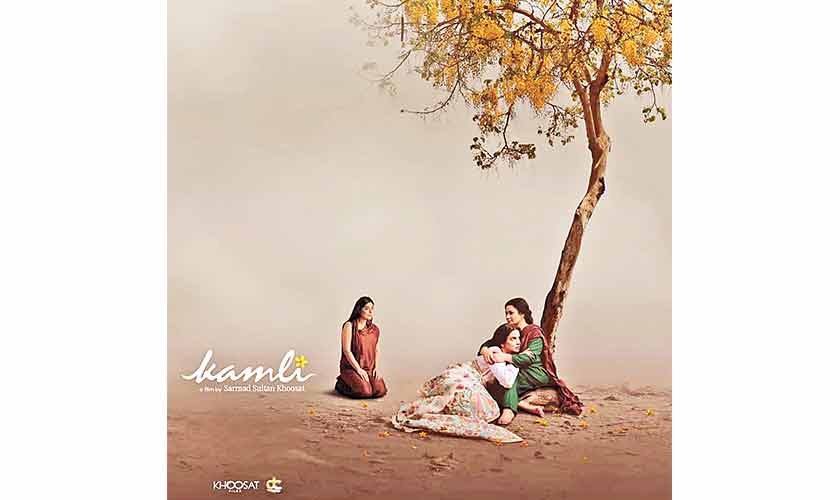 Saba Qamar is extraordinary as Hina, capturing her years of suffering and longing in a slight smile, eyes that are slightly watery, a body that is stiff until it comes alive with emotion and desire. The actress wears barely any makeup, her hair wavy and carefree, refreshingly freed from the shackles of the generic blow-dry, and there is a raw, riveting beauty to her. Saba shines in every scene, sweeping the audience with the emotional wreckage of Hina’s life. It wouldn’t be wrong to say that this is her best performance to date.

Then again, there is a lot within Kamli that can be earmarked as a ‘best ever’ in the annals of Pakistani cinematic history. Entrapping Saba’s Kamli with a madness of her own is Sakina, performed brilliantly by Sania Saeed. Aggression simmers just beyond the surface of her maternal love. She is controlling and dominating, the doting in-law-from-hell and only Sania Saeed could have had done justice to a role so complicated and nuanced. Her performance is flawless, worthy of awards and standing ovations and testament to how Sania remains one of Pakistan’s longest standing acting powerhouses.

Holding her own is Nimra Bucha, with her sardonic smile, hardened eyes and sarcastic declarations. Her role may not have had been as meaty as that of the other female protagonists but she delivers a strong performance.

Hamza Khawaja makes an impressive acting debut as the mysterious Amaltas. He speaks in a measured tone, drawing out Hina’s long-subdued spirit, and how the sparks fly when the two meet! In retrospect, Kamli’s story is not an entirely complicated one but it is unique and also, brave, capturing the physical longing and loneliness that a woman can feel in a sensitive, thought-provoking manner. If one had to nitpick, perhaps the ending could have had been slightly more lucid – but not too much, for that would give away some unexpected plot twists. Also, the accents of the characters vary – some speak with a distinct Punjabi drawl while others converse in basic Urdu. Why is the way that they speak so dissimilar considering that they all dwell in the same village?

But these are miniscule details.

The plot unravels at a pace of its own and while the movie extends a little beyond two hours, it is testament to Sarmad’s prowess as a director that it never loses its grip on its audience. Certainly, it isn’t your typical masala entertainer but one can’t sequester Kamli entirely into the realm of parallel cinema either. There is music, romance, a theatrical play of emotions and it’s the sort of story that you can sink your teeth into, the after-taste lingering long after you have left the cinema.