Sidra Niazi has a small smattering of acting roles to her credit – but her career is quickly spiraling upwards. Green-eyed, fair, with a long mane of hair, the fledgling actress is extremely beautiful but looks are only one of the factors leading to her growing popularity. She’s very visible on TV, simply because she’s part of the cast of two of the year’s most successful dramas; 7th Sky Entertainment’s dramatic saga Qayamat which has constantly collated very high viewership ratings for Geo Entertainment and the extremely popular romantic comedy Chupke Chupke which aired on HUM TV all through Ramzan and is now airing once again, on demand.

Sidra may not have played a main lead in either drama but she’s part of a significant number of scenes, bringing about some major plot twists. Her work has certainly been noticed, taking the fledgling actress by surprise.

In a late night conversation, she revealed to me, “You know, I hadn’t expected for people to start recognizing me but there have been times when I have had my hair tied and my face mask on and I’ve still been noticed. I could be buying clothes or even getting vaccinated and people have come to me and told me that they loved my work in Chupke Chupke or Qayamat. I once asked them how they knew that it was me and they said that they recognized my voice!”

Is she enjoying it? “I am not too sure that I was prepared for it,” she says.

But Sidra may have to prepare herself for much more recognition now that she’s come on-board another high-profile project. As part of the cast of the upcoming drama ‘Tumhare Husn Kay Naam’ directed by Saqib Khan, Sidra will be acting alongside Saba Qamar and Imran Abbas. A single image of the script, posted by her on her personal Instagram, has also been re-shared by multitudes of celebrity-related pages. The hype is likely to grow as the drama’s shooting continues.

However, with fame come its pitfalls and the young actress is getting criticized now and again for faltering during some scenes. Sidra observes, “I falter simply because I am still learning. I never wanted to start off with a major lead role in a drama. I wanted to play important characters who may not necessarily always be in the spotlight. That way if I did something wrong, it wouldn’t be glaringly obvious. At the same time, I would be learning more about the craft from the director and my co-actors.”

She continues, “In retrospect, even though I have learnt on the job, there are times that the mistakes made by side characters end up getting overlooked. There are recent scenes of mine that make me squirm; I’d be smiling for far too long and I wish that some of it could just have been edited out or someone had guided me on set.”

Sidra’s tryst into acting started accidentally, when a neighbor, who happened to be director Haseeb Hassan’s wife, suggested that she should act. A role in the telefilm ‘Laal’ prompted Sidra to begin exploring more acting opportunities. “What I really wanted to do was tackle social issues that were close to my heart. When I met the Chairman of HUM Network, Sultana Siddiqui, at an event I told her this,” says Sidra. “But Sultana Apa suggested that I start off with acting. I know that dramas are the most potent way for reaching out to people and perhaps, over time, I will also be able to use my career to talk about causes that matter immensely to me.” 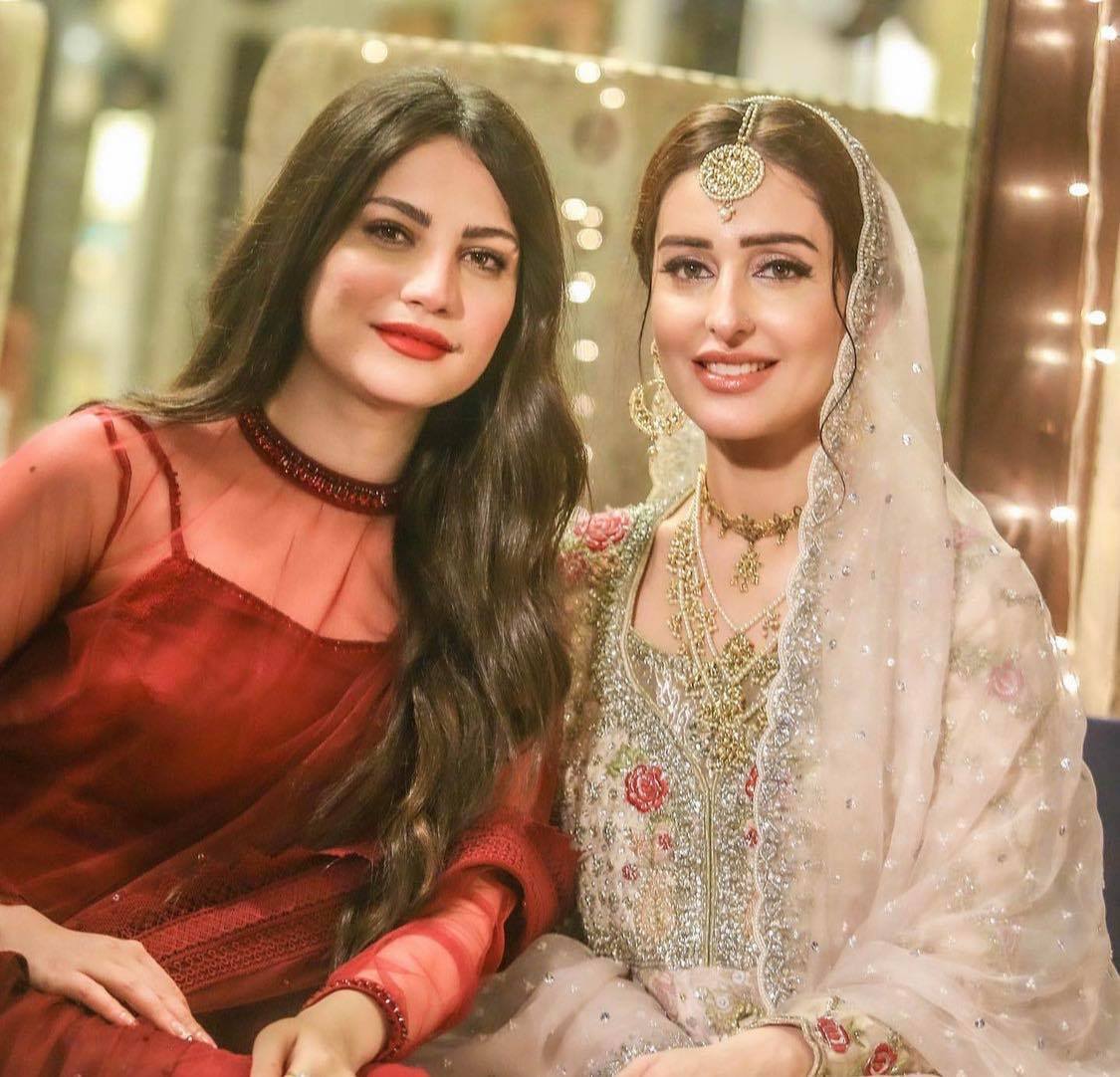 With Neelam Muneer on the set of ‘Qayamat’

Right now, though, she’s enjoying her burgeoning acting career. ““I am lucky to be in a profession that excites me. Acting, I feel, acts as a catharsis for me. All my life I have played characters without letting anyone know how I felt inside, so I could try and do the same on screen.”

What does she mean by this cryptic insinuation? “Everyone has demons that can come to haunt them and I have fought my own battles,” she elaborates, albeit vaguely.

Sidra on TV – smiling beatifically, perfectly coiffured – may not appear to be someone who has suffered personal struggles but she points out that everyone endures ups and downs. She cites acting as an outlet through which she seeks respite. “I also draw strength from prayer and from family,” she says. “I want to do more to help others who may be victims of abuse. Sometime in the future, I also want to be part of projects that are more socially aware, aimed towards helping people come to terms with the pain that they may have suffered.”

Maybe her steamrolling career is God’s way of blessing her with good fortune and putting her demons to rest. Life may be tough but this doesn’t mean that there can’t be a happy ending for those who rise against all odds. And it does look like Sidra Niazi is heading out towards a happily ever after!