It took nine minutes and the heartbreaking statement “I can’t breathe” for the American dream to shatter. The land of the free where “all men are created equal” is a notion that America so desperately clings on to but with George Floyd’s death it became abundantly clear that those privileges don’t extend to the black man. However, the murder didn’t just turn America on its axis; in fact it changed the entire world as we know it.

The world marched for Floyd and others like him

Within hours of the murder, hundreds and thousands of people took to the streets in America to protest against police brutality against black people. It reignited the Black Lives Matter movement that had begun in 2013 after the acquittal of George Zimmerman who has shot and killed Trayvon Martin, a black and unarmed teenager. The protests began to peel back the layers of America and we got to witness firsthand the extent to which underlying racism was inbuilt in its society.

The otherwise peaceful populous took to the streets as what began as peaceful protests that ended up turning violent. The National Guard had to be activated around 28 times and the then president Donald Trump added fuel to the fire. He called the protestors “thugs” and threatened them with “vicious dogs” and used the phrase “when the looting starts, the shooting starts.” He even told a Congresswoman of color to “go back” from where she came from.

Several other countries joined in on the protests, despite the ongoing pandemic, and used the opportunity to highlight how similar injustices were happening worldwide. In Rio, impoverished communities marched for Floyd and for their own people who were killed by the police. In Paris, the killing of Adama Traoe, a Parisian Arab, while in police custody was a focal point of the protests. In Australia, Floyd’s death was eerily similar to the 2015 death of an Aborginial man David Dugay who was also handcuffed, laid on the sidewalk and suffocated. Just like Floyd his last words were “I can’t breathe please let me up, I can’t breathe.” 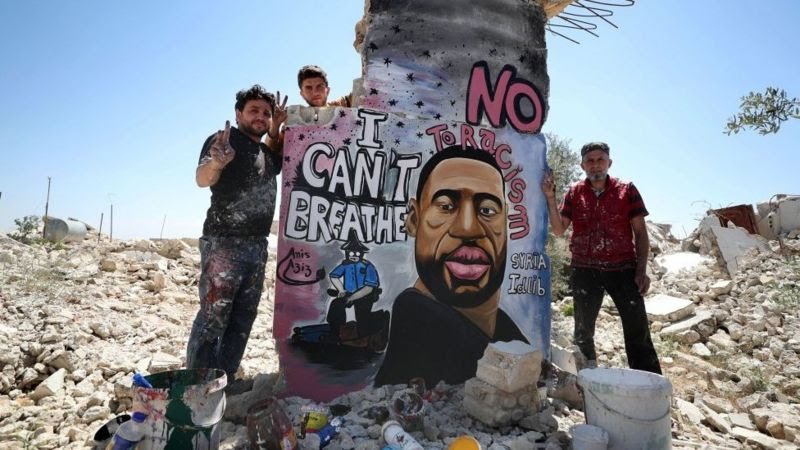 History began to be corrected

Many protestors around the world began to topple down statues that were shaded with a racist past, a move that was criticized by some as trying to erase history. In America, statues of colonizers such as Christopher Columbus were removed because of the role that they had played in the genocide of Native Americans. Statues of presidents who were known slave owners, such as George Washington and Thomas Jefferson, were removed. In the UK, protestors took down the statue of Edward Colston in Bristol. He had been involved in slave trade but was remembered for his philanthropic side. Plans have also been made to remove the statue of the white supremacist Cecil Rhodes in Oxford. Protestors also went as far as to deface the statue of the beloved Winston Churchill.

The same sort of protests also took place in Europe. The King Leopold statues were burnt and defaced for his crimes against the Congolese people. In France the statue of the celebrated Enlightenment Thinker Voltaire was defaced for his part in slave trade.

History that was once white washed began regaining its color.

The sporting world owned up for its mistakes

In 2016, American Football quarterback Colin Kaepernick refused to stand up for the national anthem in protest against racism and police brutality. He explained his actions saying “I am not going to stand up to show pride in a flag for a country that oppresses black people and people of color.” For the season, he either sat on the bench or kneeled during the national anthem. Kaepernick had to pay the price for this political statement. The then president went after him with personal attacks and teams refused to sign him. But now the sporting world has changed and has become more inclusive. Several athletes have followed Kaepernick and made similar political statements, especially in regards to BLM. 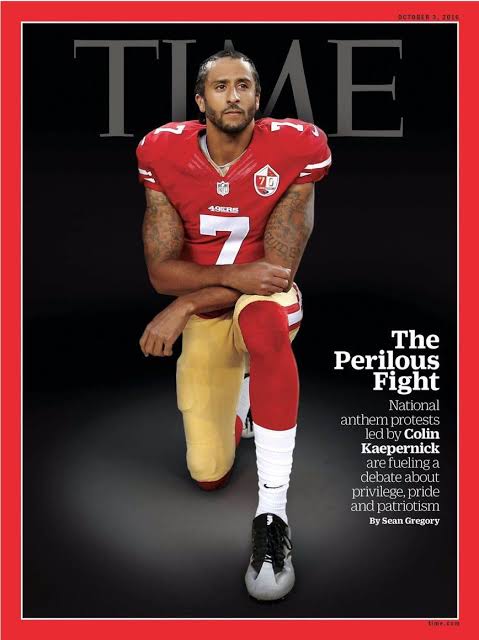 Japanese tennis player Naomi Osaka who has been ranked number one by the Women’s Tennis Association and whose father is Haitian and mother Japanese, refused to play in the Southern Open and New York Western. The tournament was forced to postpone matches for the day and when they returned, Osaka sported a BLM shirt as she won the semi-final. During the US Open she wore a mask printed with the name of Breonna Taylor, another victim to police misconduct. 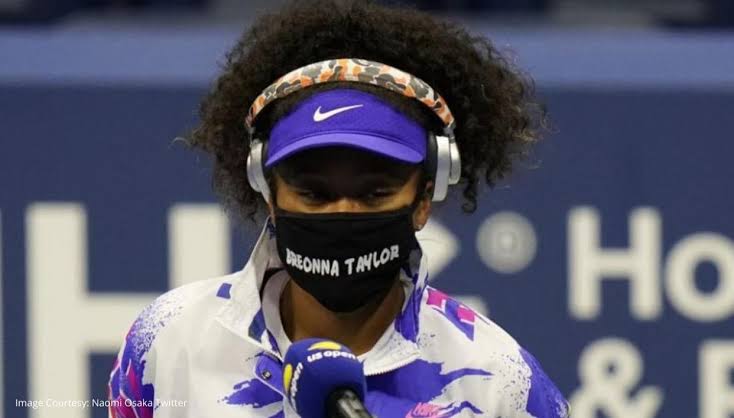 Bubba Wallace, NASCAR’S only black driver, had Black Lives Matter etched onto his car. Formula 1’s champion Lewis Hamilton who is also black, protested in London. Meanwhile, the Women’s National Basketball Association players dedicated their season to Breonna Taylor by using the slogan “Say Her Name.” They also dressed in white shirts with seven bullet holes in tribute to Jacob Blake, yet another victim.

The NBA saw courts sporting the Black Lives Matter logo and also saw the players sporting logos on their jerseys which included “Say Her Name,” “Black Lives Matter,” “Freedom,” and “Justice.” One player, Jamal Murray had a picture of Taylor and Floyd on both his shoes. European players also wore the logos in their own languages. Luka Doncic from Slovakia had ENAKOPRAVNOST which means ‘justice’ printed on his jersey.

Hollywood is called out for not being inclusive

George Floyd’s death opened up conversations on how Hollywood was not inclusive of black people. The former president of the Foreign Press Association that hosts the Golden Globes, Philip Berk, was expelled after an email came to light in which he called the BLM “a racist hate movement.” More criticism followed when filmmaker and directors, Ava DuVernay and Regina King called out the Hollywood Foreign Press Association for having absolutely no black members in the Golden Globes selection process.

Back in 2015, there was an outcry during the Oscar’s award season when black actors protested that the Academy only nominated white actors for a two consecutive years. Prominent actors who protested included Jada Pinkett Smith, George Clooney and Spike Lee. It seemed that the Academy finally succumbed to the pressure when it announced that it planned on introducing a new eligibility criteria for Oscar nominees to improve on its diversity. What those rules are, they never specified.

Several TV shows also worked to correct their mistakes. The long running show Cops stopped airing because it showed police using excessive force. Golden Girls was also recalled for its use of blackface.

Celebrated classics from the past, such as Gone with the Wind, were also criticized for its racist depiction of black women. People were reminded of how actress Hattie McDaniel had been the first African American woman to win an Academy Award for Best Supporting Actress for her work in Gone with the Wind. She had been forced to sit in a segregated seating amongst her peers. 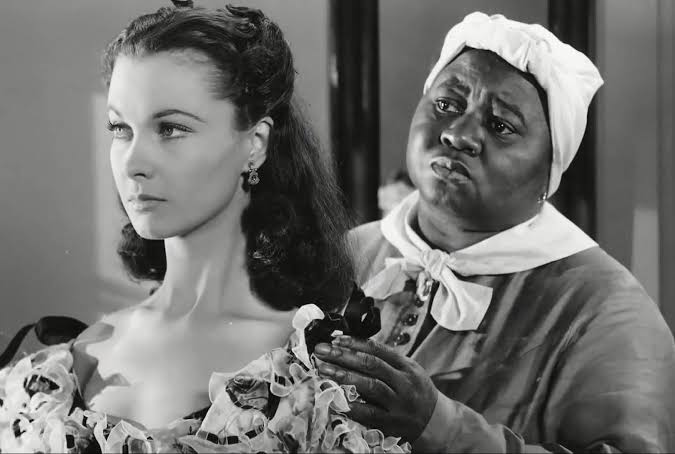 Transgender model Munroe Bergdorf exposed L’Oreal for firing her in 2017 for being vocal about “racial violence of white people.” Others began calling out celebrities for cultural appropriation. The Kardashians were criticized for their cultural appropriation for sporting braids, which is more in tune with black culture (they themselves aren’t black). 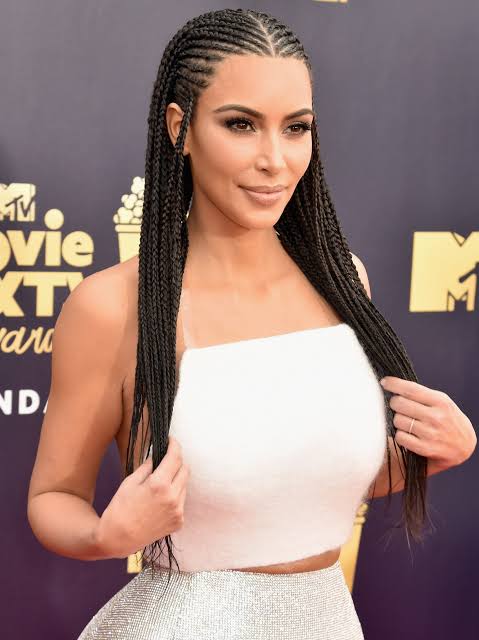 Several celebrities apologized for taking up roles that should have been given to people of color rather than have been whitewashed. From Scarlett Johansson to Emma Stone, a long list of industry A-listers apologized for taking up roles that weren’t meant for white people. Similarly, Hank Azaria who voiced Apu in Simpsons acknowledged for his part in reinforcing racial stereotypes.

Although George Floyd’s murder has changed the world, there is still a long way to go for everything to be okay. The world has wronged minorities for too long and the efforts to correct those wrong have come at a terrible price. But there is still hope that George Floyd’s sacrifice won’t go in vain.