And when Maula wants to storm on to cinema screens, wielding his gandasa, glare fiery-eyed at his enemy and romance in a gruff Punjabi accent, he will do so, notwithstanding a pandemic, longwinded court cases and a fumbling economy. As long as Maula is willing, who can stop Maula Jatt, after all?

It does seem that fate – Maula – has finally smiled upon The Legend of Maula Jatt (TLOM), Bilal Lashari’s long-awaited directorial venture, produced by Ammara Hikmat and boasting a star-studded cast. The movie is scheduled to release on October 13th this year and a two minutes 47 seconds long trailer, released auspiciously on the 14th of August, revealed precisely why it may have had been worth the inordinately long wait. 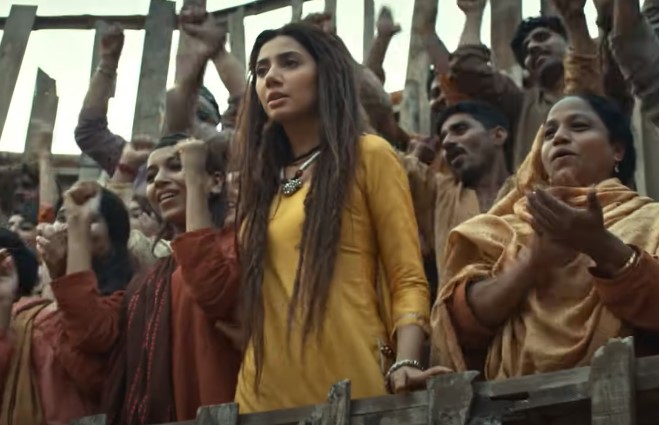 There’s also going to be some spectacular cinematography on display; the utilization of VFX, expansive grand sets and elaborate costumes is evident from the trailer alone. In fact, there’s a fair chance that Bilal Lashari’s skillfully created visuals will rival the star-power of its cast. There’s the ancient Rohtas fort lit up magnificently, crumbling gateways, a gladiator’s arena where Maula will battle out his vengeance, a terrace looming high with a view of the rising sun – the visuals draw you in as do the actors who may be some of Pakistan’s most popular names but are seen like never before. The characters that form the iconic story are rustic, theatrical, surreal. This is escapist cinema to the core – but the sort that was yet to be seen in Pakistan.

It is said that TLOM is Pakistan’s most expensive movie to date, with analysts conjecturing the production costs to vary from a steep Rs 20 crore to a whopping Rs 40 crore. The exact figure may not be known but there’s no denying that the movie is many miles ahead visually from its lower-budgeted local counterparts. It may be a remake of the original cult classic Maula Jatt but this new, updated version might be likened more to high-end fantastical international releases.

Regardless, TLOM is a Pakistani production. In order to break even and aspire towards a profit, it cannot rely on Pakistan’s limited smattering of cinemas and fickle cinema audience. The movie has plans to release internationally and it needs to do so in a big way. Should it manage to capture the attention of the international audience, it could open doors for other Pakistani releases and also showcase some of the best of Pakistan’s talent on a global scale.

But will the movie manage to do so? It may be at par with international production standards but will the story also manage to win big at the box office? The movie’s dialect may be Punjabi, but does it have other homegrown Pakistani elements that set it apart from other fantasy hero movies released internationally? TLOM has a packaging that is very enticing and the cast consists of some of Pakistan’s finest performers, but today’s audience is hard to ensnare and the story needs to be different in order to have them buying cinema tickets.

On a different tangent, will the Pakistani audience, as well as the global one, want to watch a movie that is entirely in fluent, heavy duty Punjabi? The subtitles ought to help, especially since the world at large has now built an appetite for foreign language films and dramas watched with the aid of subtitled. Also, Punjabi is one of the widest spoken languages across the world which means that TLOM won’t be entirely alien to a huge chunk of its target audience.

The release of any movie is preceded by observations on its potential pros and cons, as it is in this case. But there’s no denying that TLOM’s trailer is exciting and hints at the potential of local cinema. It will also bringing two of the country’s most loved actors, Fawad Khan and Hamza Ali Abbasi, back to the screen after a long, long time. And amping the fervor is a clip of Fawad Khan and Mahira Khan gazing into each other’s eyes in a field strewn with marigolds. You’re reminded of the hit Humsafar when the actors’ on-screen pairing first became all the rage and now, far more rustic as Maula and Mukkho, these two still seem to have a screen chemistry that sizzles.

We’ll know more about that once we see the movie. Bring on the magic, Maula willing!