In the clustered world of social media, sometimes all you have to do is stumble upon a series of comments to uncover rifts and controversies. There was a time when fault lines within fashion and entertainment’s exclusive circles would remain hidden away from the general masses, the stories merely flitting amongst a niche group before waning away. But the game of Chinese whispers has snowballed thanks to social media and often, tussles are laid bare for public viewership.

Case in point: this post shared by model  Eman Suleman which lead to a comment by veteran stylist Nabila…

Out came an avalanche of back and forth commentaries with stylist Fatima Nasir as well as models Eman Suleman, Farwa Kazmi and Rehmat Ajmal joining in … 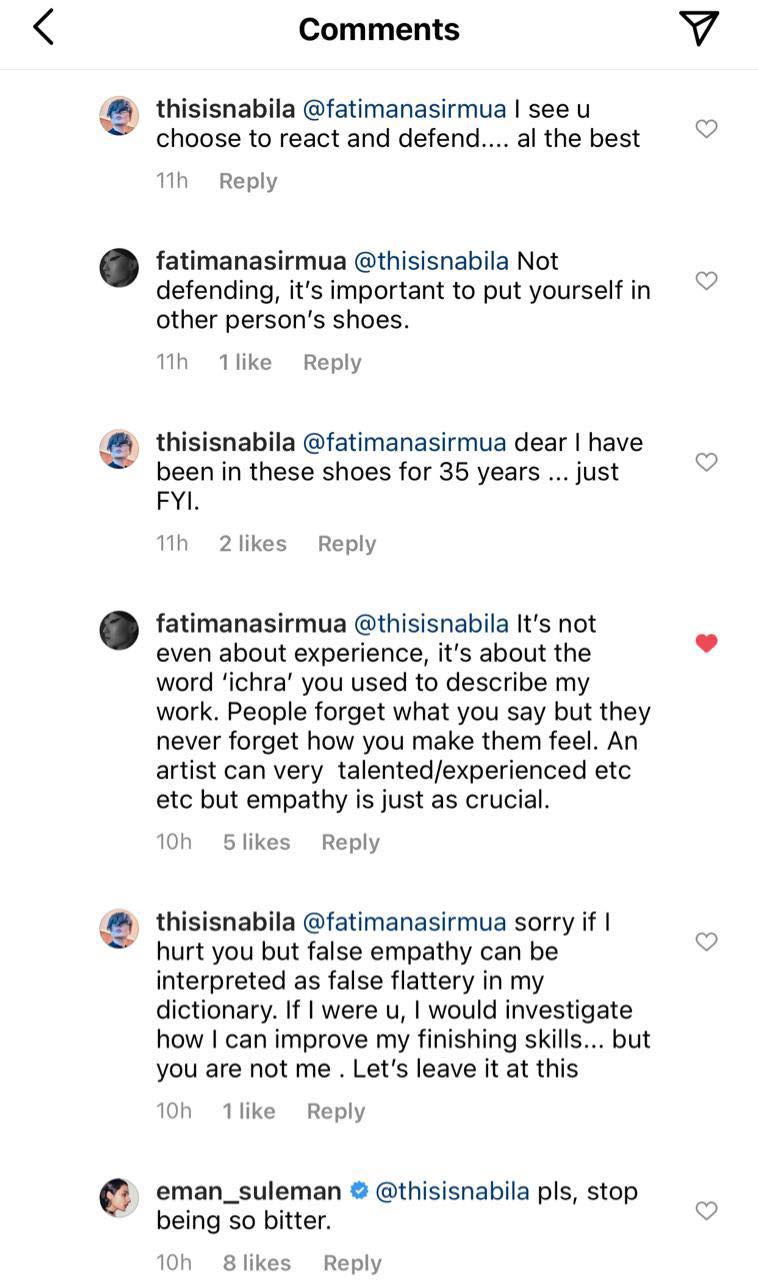 Why did a senior like Nabila choose to criticize a junior stylist, Fatima Nasir, so openly? What prompted the models to rush into the debate?

“I don’t comment about everything but it is my right to voice my opinion if I want to,” says Nabila. “ Yes, I criticize bad work, starting from my own and from within my own company. I have invested 35 years of my life into the style and beauty industry and have mentored innumerable stylists, helping them build their careers and become well-known names. I provide vocational training in collaboration with the Hunar Foundation and I opted out of the Lux Style Awards nominations in order to give other stylists the chance to grow. If I criticize a young stylist  then perhaps he or she should try to use it constructively rather than reacting to it.”

She continues, “A friend once told me that I needed to make my work more refined. Another client told me back in the ’80’s that I was great with straight hair but needed to get a better grasp over curly hair. I took it on as a challenge and mastered textured hair. I have always thanked people who have criticized me and grown from it. I was expecting that my juniors would do the same rather than be heartbroken and feel victimized.”

Why, then, did Nabila use the word ‘Ichra’ – the name of a marketplace in the older part of Lahore – in such a disparaging way? “I wasn’t being disparaging at all.  know Ichra very well. I love roaming through it as I do through Jodia Bazar, Shalmi, Khajoor Bazar … in search of treasures!,” she says. “But Ichra doesn’t sell real hair extensions. Synthetic, nylon hair wigs are sold there and the shine gives them away. Only an expert eye would be able to recognize this.” 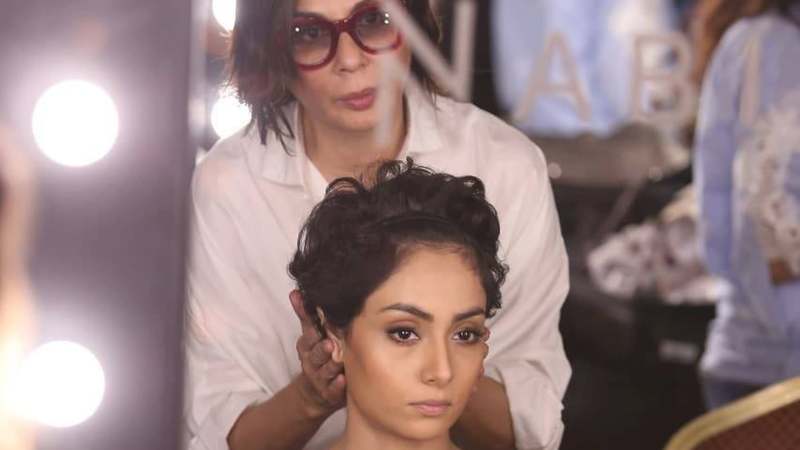 Nabila, backstage with Farwa Kazmi, one of the models who was part of the recent Insta-debate

Stylist Fatima Nasir, on the other hand, feels that there was no need to launch what she considers to be an attack, so openly on social media. She also felt that the Ichra marketplace was referred to in a derogatory way. “Why was Nabila giving me constructive advice at all? She doesn’t follow me on social media and has never commented on my work, good or bad. Why now? It was very clear that she was very targeting me, saying that the stylist should up their her game and making a disparaging comparison with Ichra. It was a very technical hairdo and I had worked hard on it.”

“Maybe 10 years ago it was alright to make such comments but the world has changed now. Everything gets noticed on social media and we have to be careful with what we say and how we say it.” 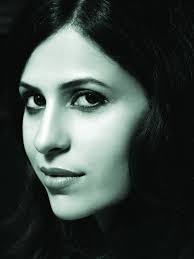 Model Farwa Kazmi observes, “I was initially refraining from commenting because I did not have anything to do with the debate. But then, I just though that I needed to stand by Fatima because this was such an open attack on her work. There could have been better ways of giving advice. And there is nothing wrong with Ichra. It’s wrong to be so condescending about someone’s work or a certain locality. Nabila is a senior and commands respect but how can she be expected to be respected if she behaves like this?”

According to Eman Suleman, whose post triggered off the entire debate, it was all very ‘unnecessary’. “Sometimes we all mistakenly say things the wrong way on social media and we are all learning. But there is a certain way of offering advice in a constructive way. This was not the way,” she says.

Historically, there are many senior fashion professionals who have a tendency for being severe with their words. Karl Lagerfeld was infamously rude. Anna Wintour was the very apparent inspiration for Miranda Priestly, the evil editor enacted by Meryl Streep in the movie ‘The Devil Wears Prada’. Stylists and designers are known for not mincing their words. And Nabila, particularly, has a penchant for making remarks likening the beauty industry with local jingo: ‘nihari’, ‘chicken karahi’ or in this case, ‘Ichra’.

“It doesn’t mean I don’t like these foods or that place,” says Nabila. “When you dedicate your life to one thing, you end up commenting sometimes if you see that the finer details aren’t being followed. Maybe I ended up being harsh. It wasn’t personal. It was purely professional.”

An ‘Ungal Award’, posted by Nabila

But personal or professional, blunt opinions can offend others and spark off debates like this one. The mention of a locality in a critique – even one made by a senior – can be interpreted to have been made in a disparaging tone. And in today’s world, everyone has a voice that rings out loud and clear on social media.

Fatima Nasir says, “Why target me at all? It’s not like the industry supports me and I have won awards.” It’s a comment that hints at a problem that runs deeper than just a social media fight. Perhaps, it also has something to do with the general dissatisfaction with local award ceremonies as well as the bifurcation within the industry, split into Karachi and Lahore.

It would be important to note here, though, that Fatima Nasir has a considerable repertoire of work and continues to have a hectic schedule. Perhaps she – and other young fashion professionals – need to make a conscious decision that they will not consider awards to be their benchmarks. If they’re getting work and are regularly paid for it, that should be acknowledgement enough of their success. It means that brands love their work – the awards juries will inevitably follow!

“Yes,” Fatima accedes when I point this out to her, “but I am vocal and I will always speak out if I feel that I am being attacked.”

Eman Suleman muses, “This is such a small issue. This is why I have unfollowed so many magazines (on social media). Why do such non-issues get picked up and be converted into stories?”

But then, even a ‘non-issue’ gets noticed when a veteran and younger fashion professionals begin throwing remarks, back and forth, all on a very public platform. The Chinese whispers are bound to build up, exposing the rifts that run deep in Pakistan’s volatile fashion industry.