This used to be fashion week season merely two years ago. The weather would begin to get slightly nippy and social media would be clustered with fashionable images from around the world. New York, London, Milan, Paris; runways would be laid out in the world’s fashion capitals. In Pakistan, our own catwalks would be prepping for the spotlight; some in Lahore, some in Karachi, collective designer showcases in ‘fashion weeks’ and the occasional solo shows.

For me, life would become a haze of attending a fashion show, floating out interesting bits on social media and then charging up on coffee and writing reviews all through the night. It was hectic and draining but it was life as I knew it. Of course, in these pandemic-ridden times, I have missed it – although, even two years down the line, I do not miss the ghastly shows which we shall not name lest they turn up yet again (much like the malevolent Voldemort in Harry Potter who was He-Who-Must-Not-Named lest he turned up should he be mentioned).

Nevertheless, with the coronavirus’ rein inching towards a completion of two years and vaccines making life slightly less risky, fashion shows are slowly rearing their heads. The madcap fashion week routine of yore won’t be returning for a bit, but here’s a run-through of the events that may just roll out into the local fashion game, this Autumn/Winter 2021… Designer Kamiar Rokni, bridal designer extraordinaire and a long-time fashion week highlight, is finally doing something he should have done long ago: stage his own solo show. The designer completes two decades of his career this year and has been working on a collection that runs the gamut from pret to bridal-wear. I am reminded of all the many House of Kamiar Rokni collection that have made magic on the runway; the Oriental inspirations, the crazy color blocking, the folksy embroideries – evidently the new line will be blending it all together. It was rumored that the collection was originally meant to be part of a fashion week hosted by Lahore’s Pakistan Fashion Design Council (PFDC) which was supposedly going to be taking place in November this year. However, the PFDC won’t be having the fashion week this year. This is a pity considering that the council, once always in the limelight, has been uncharacteristically quiet all through the past two years and it would have been good to see it helming a catwalk yet again. I am told that the PFDC had opted to take a backseat for some time because it was felt that the market for fashion had slowed down during the pandemic and with people scared for their lives, there wouldn’t be too much focus on sartorial trends. I am also aware that the PFDC hopes to be coming back with a bang in March next year. It is, nevertheless, a relief that Kamiar Rokni didn’t decide to delay his own show to next year. The Kamiar Rokni solo is slotted to take place mid-October in Lahore and from what I hear, will be throwing back to all the many, many collections through the years. Whirling with color, the right kinda bling, music and some very ‘it’ fashion – basically, everything Kami! Very much in the works – but yet to be announced, so you heard it here first! – is a solo presentation by designer Fahad Hussayn scheduled for the end of this October. Fahad has always delivered on experiences – his collections come coined with intriguing names, he devises the music for them, creates fantastical accessories, plays with light, makeup, the works. Even at fashion weeks, sandwiched in a collective show, a Fahad Hussayn collection has always been memorable. And now that he’s beginning to fly solo, his presentations have fast become ones to watch out for.

Consider the last Fahad Hussayn solo, titled ‘Grand Bazaar of Curiosity’, splayed out across a venue in old Lahore a la the Arabian Nights. There was no runway, just models positioned in different nooks and corners amidst dancers and fiery lanterns.

Now, Fahad is once again coming up with an artistic solo installation, centered around a theme and with – of course – a very intriguing name. The details will be revealed soon but knowing that it’s a Fahad Hussayn production, there’s bound to be some magic at play. 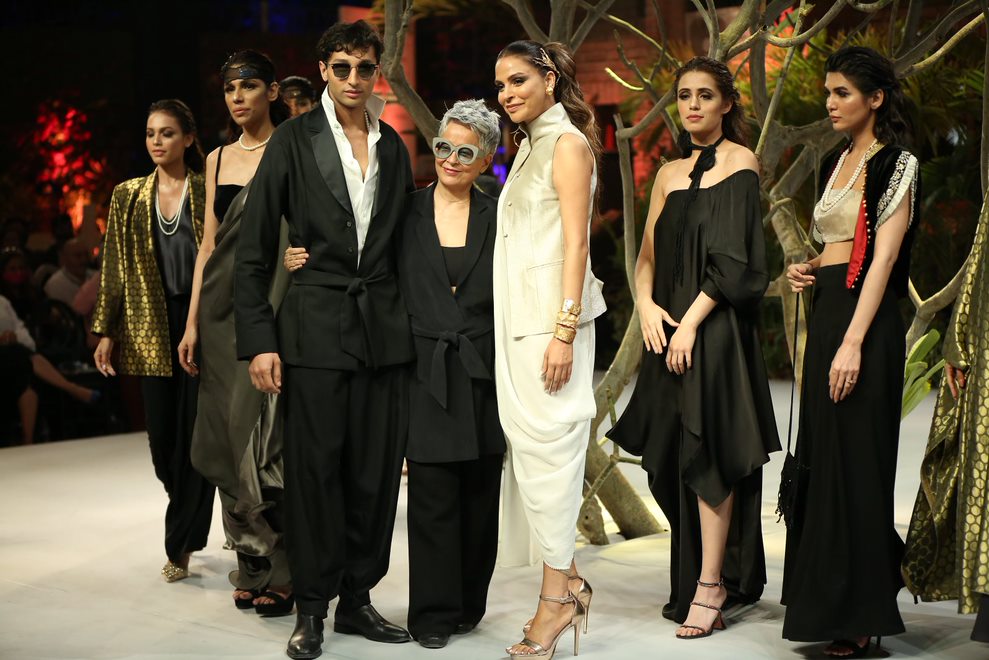 The ‘other’ council steamrolling local fashion, Karachi’s Fashion Pakistan Week (FPW) has been relatively active despite Covid running rampant. The council’s Chairperson Maheen Khan helmed the spring/summer edition of FPW earlier this year at an exclusive open-air venue with limited audience. She is now planning out the next fashion week, tentatively slotted for December this year.

According to Maheen, FPW’s first day will be planned along the theme of the Met Gala, with the red carpet becoming a veritable runway. Designers will dress their muses – celebrities or models, for instance – and the clothes will be showcased on the red carpet. A solo show is tentatively planned to take place on this day although, with December still some months away, the designer for this show has not been confirmed.

The subsequent day will be dedicated to collective designer shows that have always been part of fashion weeks in Pakistan. Hum Bridal Couture Week (BCW) wrapped up 10 years in the business with its show earlier this February. Now, the bridal bling is all set to shimmer in the show’s 19th edition, taking place in Lahore from 10th to 12th December. The extensive demand for bridal-wear and the profits it generates turns the wheels for the business of fashion in Pakistan and BCW is widely acclaimed amongst designers as a hugely successful marketing mechanism.

The show always features a long list of designers, celebrities, music, dance and bling. Hoping to see some fabulous bursts of fashion as well.

Other solos slinking in the shadows Many more brands are considering putting up shows – but are yet to confirm. Designer Mohsin Naveed Ranjha, for instance, has become increasingly popular in the Punjab and he may just strengthen his footprint with a solo this December.

Also, it was rumored that Sania Maskatiya may be taking part in a joint show with Mahgul – something that both brands had considered but which is yet to work out. If the show does take place, it may just provide the burst of creative energy that fashion needs so badly right now. Mahgul has always been a very innovative brand and Sania Maskatiya is a power-player with a huge, loyal clientele and a fine eye for design. A joint show could really be something else.

Ali Xeeshan, Deepak Perwani, Zainab Chottani and HSY are all designers who have long been talking about hoping host a solo show but it looks like the events will probably take place next year.

Designer Hussain Rehar, meanwhile, is in contemplation right now. The very young – but very talented – designer got great mileage when he opted for his first solo outing last year and he’s considering delving into another one now. Knowing Hussain, he may just end up going for it.

So far, so good. The fashion calendar may hardly be as clustered as it used to be in pre-Covid times but it is still showing promise. Besides, before the world was hit by the pandemic, local fashion was doling out huge quantities but was hardly delivering on quality.

Perhaps less shows – but good shows – is what the industry needs now anyway. Perhaps the more commercial, generic, copycat fashion is better off with campaigns floated out on Instagram rather than masquerading as ‘fashion forward’ simply by paying a participation fee and climbing aboard a fashion week runway. Perhaps, let’s not even discuss the bad design that was blotting the fashion landscape in pre-Covid times. What if it turns up again? I am reminded of Voldemort yet again.