A whirlwind of emotions, nail biting moments and nerve racking hits led to a glorious victory in the highly anticipated Pakistan-India match, part of the ICC T20 World Cup 2021 series. What an epic way to conclude the weekend indeed!

It was a magnificent win that will always be remembered in the annals of cricket history. Our boys in green remained undefeated as they chased the target without losing a single wicket. This win sets a record, becoming the first time that our boys in green defeat India in a T20 World Cup match!

Cricket undoubtedly is the one thing that brings our nation together. Even the skeptics come out and cheered for our team. As usual, the excitement leading up to the match was off the charts. And as the match started, the buzz, excitement – and stress – piled on and stayed with us throughout. It was worth it!

Twitter had been blowing up during these crucial hours and after the win it was bound to amplify. We are quite enjoying the virtual banter, witty tweets and memes. Here is some quality content to relive the spectacle!

Many took this opportunity to take jibes at the viral video of Indian fans breaking their TV after a previous loss. Sorry, not sorry.

Spotted: Anushka Sharma Photoshopped into the cricket stadium audience as the disappointed spectator!

As wife of Virat Kohli, captain of the Indian team, Anushka had many more memes dedicated to her …

Kohli with a disappointed PM Modi 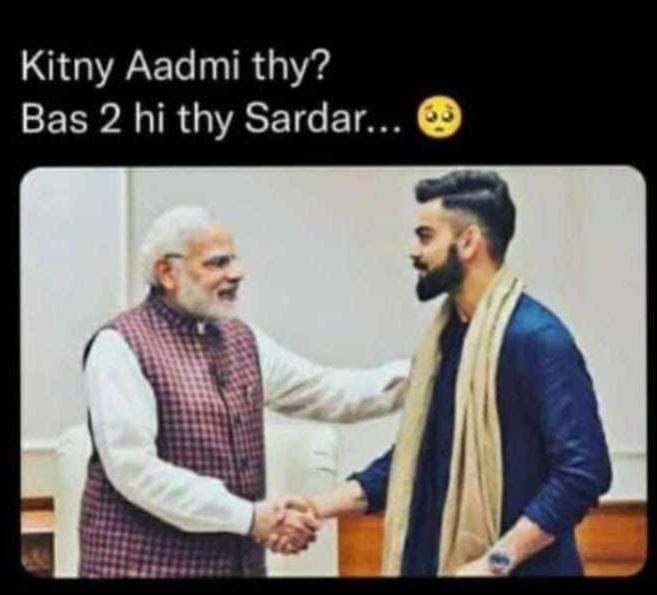 #AkshayKumar
Before Match vs After Match pic.twitter.com/o6641ziLes

Of course, many saw fit to use Indian’s Mauka Mauka anthem against them

Rohit Sharma who said i will teach Pakistan that how to play cricket 🤣🤣 knock out by a 21 year young player shaheen afridi
Congratulations Pakistan#MaukaMauka Pak vs India pic.twitter.com/yYdsMPUU5C

Even Iqrar-ul-Hassan came on board!

And many other celebs as well…

While others couldn’t be more proud…

Thank you team for the brilliant play! May you continue to shine 😍

This is no ordinary victory… This is a reminder that Pakistanis must always hold their heads high. I had been hearing this entire past week that Pakistan won't win, no chance! And this from our own people! So so proud of our team for proving everyone wrong!! Well done!!! pic.twitter.com/1Me4iWhEJJ

This moment was overwhelming..there is no doubt about it ..let the peace prevail please.
Pak vs india #akshaykumar#MaukaMauka pic.twitter.com/HVU0jjr5Zl

Celebrations in the Pakistani pavilion as the winning ball was played

When Rizwan prayed during the tea break in the middle of the stadium, full of commotion and distraction

Namaz is the key to success.

Babar Azam’s father’s reaction to his win left us teary eyed. Ah, what a proud moment

Dhoni chatting with Pakistani players right after the match

This epic selfie by the man of the hour, Shaheen Afridi

The cricket fraternity also celebrated the win and congratulated the team

Finally the jinx is over winning against India in World Cups. What a thumping win by boys in green… #PakVsInd #PakistanZindabad #T20WorldCup

Alhamdolilla…It’s the first one, the most magnificent one but remember journey has just begun.. such a proud moment for all Pakistanis and thank you boys for providing us this moment to cherish.#PakistanZindabad

The most destructive duo I've ever seen in my life just watch them running between the wickets.#PakvsIndia #PakVsInd #INDvPAK pic.twitter.com/nfNF7m26Ou

What a statement Pakistan just made in the #ICCT20WorldCup2021 Now favourites in my opinion after that emphatic win over India. Just a super all round & impressive performance. Babar Azam continues to enhance his reputation as one of the best batters in the world in all forms !!

And the most humble Tweet by the Captain himself

This is for you, Pakistan.
History made. All eyes on the next game, in sha Allah. #PakistanZindabad 🇵🇰 pic.twitter.com/Hsf5eUBhtD

Post-victory session with the team!

Here’s the Captain giving his team a post-win pep talk!

We hope we get to witness many more wins like this but this match will go down as a milestone in Pakistan’s cricket history.

What were the best moments from the match for you?

Better things you can do than celebrate Valentine’s Day